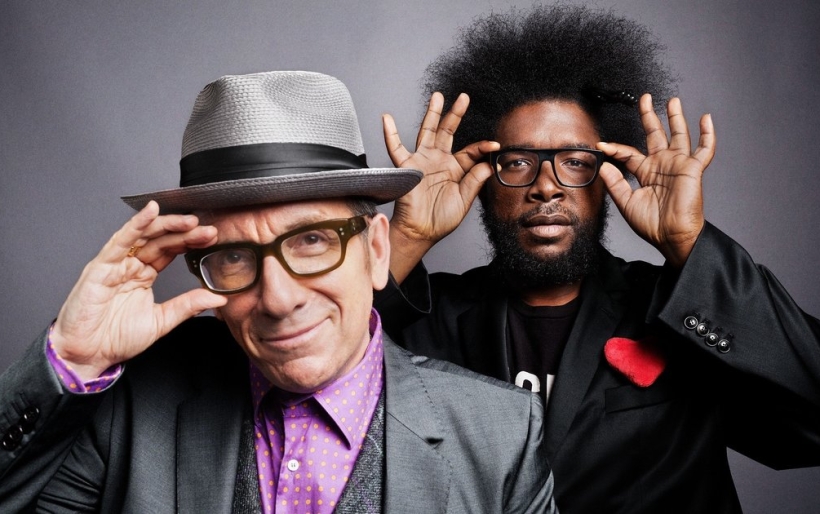 Listen to the album in its entirety here.

The Roots and Costello’s collaboration began when Elvis was a guest on Late Night with Jimmy Fallon, where The Roots are the house band. Ben Greenman, co-author of Questlove’s autobiography, Mo’ Meta Blue accounts:

The Roots’ iconic drummer, suggested the project to Costello. “I subliminally put out the idea of a larger collaboration,” Questlove says. “Or maybe passive-aggressively—I was too afraid to actually suggest that we should make a record together.” The project was originally envisioned as an EP, but the field of vision expanded. “I had worked with them enough on Fallon to know it was a good match,” Costello says. “This is a band that does what I’ve done from the start: they draw off everything, all types of music.”

About the album, Ann Powers of NPR Music writes:

Though it’s not a concept album (that’s Undun, the 2011 Roots album it sometimes brings to mind), Wise Up Ghost has a unifying theme: trouble, as it bubbles up inside bedrooms, snakes through the halls of power and festers on the streets. This is sexy music about scary topics like the abuse of power and the manipulation of desire. Is the woman in “(She Might Be A) Grenade” a lover or a spy? Does the spent prophet singing the title track warn of hardening hearts or of a creeping totalitarian threat? It’s both, throughout these songs, each examining the individual betrayals and dashed ideals that contribute to a culture’s demise. “Cinco Minutos Con Vos,” a duet with the dazzling La Marisoul of the L.A. band , comes on like a Joan Didion novel, humid with the mist of terror. “Come the Meantimes” glances sidelong at apocalypse in ways Curtis Mayfield would have appreciated. Throughout the album, Costello also samples from his own earlier songs; that literary touch recalls the self-referential mirror games of writers like Jorge Luis Borges, even as it nods to the wordplay of rappers like the one absent Roots member, Black Thought.

The sound of Wise Up Ghost comes closer to the early-’70s cinematic funk of and than to anything else. Strings swell and horns punch, but everything stays true to the rhythm ?uestlove, percussionist Frank Knuckles and bassist Mark Kelley lay down. Co-producer Steven Mandel’s mix opens up the songs’ complex arrangements so that little details — bells tinkling, a murmured aside — widen every scene. Listening, it’s hard to separate oneself from these dreamy nightmares.

Listen to the record via NPR Musichere.