Report: Opening night at Boot and Saddle with The Both (Ted Leo and Aimee Mann) - WXPN 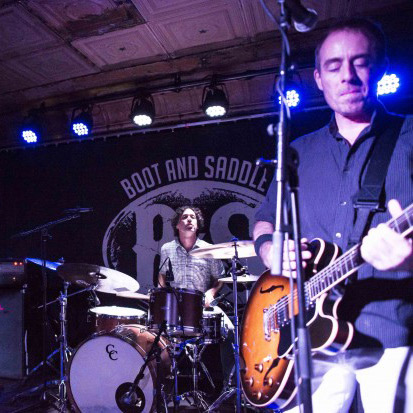 Report: Opening night at Boot and Saddle with The Both (Ted Leo and Aimee Mann)

All photos by Matthew Shaver | www.mattshaverphoto.com

Being the new guy on the block in a city that is already saturated with quality music venues is a potentially awkward position to be in. Making a good impression can be an especially daunting task when there is no shortage of smaller venues willing to host the latest up-and-comers, hidden gems, and eternally indie acts. But Boot and Saddle, the newest R5 Productions joint venture, definitely made a good first impression.

The Show
Gonna go ahead and dump my street cred down the sewers: I didn’t get in to Aimee Mann until the Magnolia soundtrack found my CD player. Sorry. [Note: me either. -ed.]  I’ve loved her ever since, if that makes up for it, even a little. Ted Leo, on the other hand, is sort of an adopted son of DC, my hometown, and so I’ve been heavily invested in whatever he does for ages. Both of them have had extensive plays on my iPods over the years, but I can say with 99% accuracy that they have never been on any of them at the same time.

So, the combination of the two seemed curious to me at first, but, after last night, I would declare them a royal duo. Not only do they compliment each other vocally, but they have a banter harkens back to the days when groups like the Rat Pack would take the time to engage the audience, and make them laugh (if you were at the show, I was the guy who got called out for making a funny face at the idea of Ted Leo drinking hot sauce water. Embarrassing and awesome.).

Playing some of each others’ hits, as well as covers, in addition to new material, The Both is most certainly a partnership, as opposed to one artist guesting in the other’s studio. That said, it seems to borrow more from the Ted Leo catalogue sonically. Crunchy alt-guitars from Leo and funky bass playing on Mann’s part kept it (mostly) upbeat, while it would appear the verses from the respective players were written independently of each other, possibly giving a single song two different meanings. It was hard to tell, as no official single or album has been released. For the new stuff the crowd stayed attentive, but it was hard to ignore the fact that we couldn’t hear what they were saying because the drums would drown out the vocals, a minor flaw in an otherwise lovely evening.

The Venue
I’m ready to say I love it, but that doesn’t make Boot and Saddle perfect. It is small, the stage is low, the AC is loud when it’s on, and the room could easily become sweltering if it is not. The stage room is closed off from the chatter of the bar area by two doors. This gives it and intimacy and quiet atmosphere that I often ache for in a music hall. It also means that if you are standing near the back, be prepared to hear the opening and closing of the doors over and over and over and over and ov…….

Back to the quiet though. I understand that chatter is part of going to see live acts, even quiet ones (WHY DO YOU PAY TO SEE A SHOW AND TALK THROUGH THE ARTIST?!), and I’ve learned to tune it out for the most part. Those doors, they will open and close, but they still help. Separating the bar and the stage in such a manner is a huge help for a venue that will be hosting smaller acts that may not command crowds large enough to drown out the ambiance of a bar. The Both could have been an exception, maybe, but the crowd was quiet and respectful, and only occasionally did the bar sounds intrude in a way that was distracting.

It’s dark too, which adds to the intimacy. I was a few drinks deep by the end, so I wasn’t paying too much attention to my surroundings, but, I believe all of the lighting in the room was coming from the stage lights, I do not recall anything hanging from the ceiling (I could be very wrong, though).

The sound just sort of bounces off of everything, so if you get a band with a loud drummer, they will drown out vocals and quieter instruments. That’s a downside of any club this size, so it will always help if you already know the words. Acoustic artists will thrive in the environment, bringing them face to face with the people that love them.

I’m sure there will be some growing pains, but Boot and Saddle could not have asked for a more flawless opening night. It was a fun crowd, a fun act, and fun employees (say hi to Wes). If you see a band you like/love is coming to town and they are playing there, make the trip. There is a really good initial line up of talent coming there, and I think it will bring an eclectic bunch of acts to South Philly.