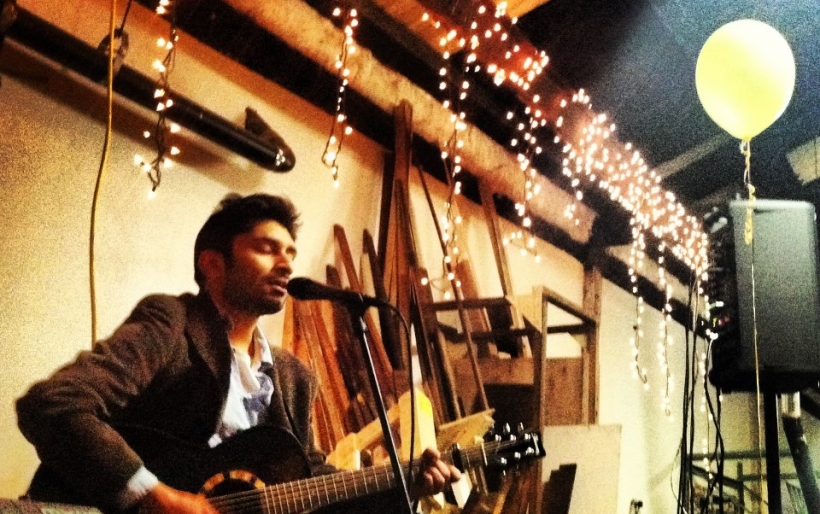 Umer Piracha brings transnational intimacy to Philadelphia, one small venue at a time

If you were to catch Umer Piracha during his morning commute, your first physical impression would not scream “introspective singer-songwriter”. In the pressed dress shirts and business slacks, he could be interchangeable with any of the myriad non-white professionals and university students who move silently throughout Philadelphia streets and offices.

This is not a very complex picture, but an unfortunate one that befalls many people of color whose appearance in America is typically packaged into clean boxes. While images of terrorists and reactionary fundamentalism tend to dominate a lot of the popular discourse around people from Pakistan, even those who don’t feel those sort of things can see people who look like Umer as an undifferentiated mass. Nobody is more aware of this image than Umer himself.

“People like categories, putting names on things. Of course, I think about how I may appear to people, or what it means to be Pakistani,” laments the 28-year-old musician (an analyst for an energy company by day). But his ethereal acoustic guitar-driven music transcends language and cultural barriers to evoke interconnectedness, shatters those perceptions every time he takes the stage.

Whether he’s enchanting a small audience at any number of West Philly house shows (such as tonight’s performance, part of JJ Tiziou’s celebrated House Concert Series) or sandwiched between sets from touring rappers on a weekday night at Legendary Dobbs, Umer’s looking to bring people of all backgrounds into his contemplative headspace.

Take a look at his Soundcould and Youtube pages and you’ll get a sense of how massive that headspace really is. Folk-influenced and reverb-heavy strumming and finger-picking partner with Umer’s versatile and evocative tenor to create songs that speak to the depth of his transnational experience. Original songs in English and Urdu sit comfortably alongside covers from Radiohead and Neutral Milk Hotel (obvious influences on Umer’s guitar-playing and song structure, as well as his lyrical preoccupations). “Humsafar Natawan” employs existential inquiry in the lineage of Pakistan’s most celebrated Sufi poets. “The Depths” address love and longing at the very apex of emotionally vulnerability. Regardless of the linguistic differences manifest in each song (Umer describes his English-language songs as more “cerebral”, whereas his Urdu ones are more spiritually-involved), Umer’s music is guided by the kind of universality and authenticity in human experiences that could link Thom Yorke to Nusrat Fateh Ali Khan, or Pakistan to Philadelphia.

This melding of the intellectual and the spiritual has its roots in Umer’s personal exodus. His birthplace, the city of Multan in the culturally-rich Punjab province (one of several historic ethnolinguistic regions in South Asia split between Pakistan and India during the violent Partition era), is known as the “City of Sufis” thanks to its large number of shrines to hometown Sufi saints. Sufism, understood by many as the mystical dimension of Islam, is a major cultural force in Pakistan and a source of much of its best-known art. Its legacy is best seen in qawwali music, group-performed devotional music whose most popular practitioners (such as the aforementioned Nusrat Fateh Ali Khan) have influenced musicians as eclectic as Jeff Buckley and Peter Gabriel.

Multan’s historical vibrancy surrounded Umer from childhood onward, but it would be years until he actually thought of making music seriously. By that point, he had immigrated to the United States, graduated from Lancaster’s Franklin & Marshall College (where he was first exposed to Western classical and popular music, as well as where he rediscovered his love for Pakistani music), and settled in Philadelphia. Songwriting became a means to release tension built up during his first all-consuming post-college job.

“I was really inspired, and all of this suppressed energy was coming out. I haven’t stopped playing since then, and no day goes by where something related to music happens,” says Umer about those first moments of artistic awakening, nearly five years ago.

Five years of sustained output has yet to yield an actual physical release (expect a full-length album to drop in 2014), but that has not stopped Umer from building a significant international audience. Philadelphia audiences can catch him primarily at tiny house shows in his West Philly neighborhood, or gallery spaces like Old City’s Twelve Gates Arts and Chinatown’s Asian Arts Initiative (where he has been a repeat featured artist in their monthly Open Mics) – places that one would expect a South Asian immigrant singer-songwriter to get noticed. But thanks to social media outreach and ecstatic write-ups in major English-language publications, Umer can trace the majority of his fanbase to his country of origin. Ironically, he sees his leaving Pakistan (to which he hasn’t returned in nearly seven years) as a major part of the same artistic and personal development that allows him to have fans there.

“Had I never left Pakistan, I would have had only one or a few different ideas about the world. But now, I have multiple ideas and they don’t always agree with each other. A lot of it is binary in nature, because there are these two big cultures that I have to navigate,” says Umer. His music allows him to navigate the complexities of two countries, each of which have their very own complicated cultural underpinnings, and speak to audience members with extremely different lives.

Ultimately, you don’t need a degree in political science or ethnomusicology to connect with Umer’s music. Understanding how identity negotiation, for an immigrant from a tumultuous South Asian country to an equally nuanced and self-contradicting Western country can play out into idiosyncratic artistic products will certainly help you begin to understand Umer and the questions that echo throughout his music.

It is more than enough, however, to watch Umer perform live. To see him communicate the timeless intimacy that can unify a few Philadelphians to the entirety of the human race.