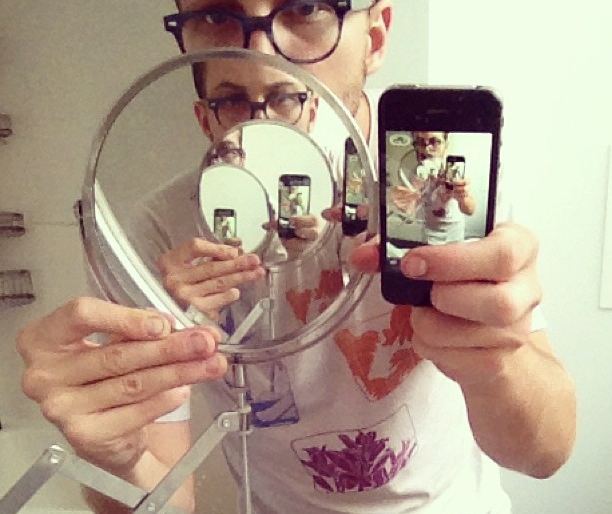 Andy Molholt will forgive you if you say that his new record – the first full-length from Laser Background – is kind of confusing and bizarre. He’ll even forgive you if you tell him, as I did, that it freaks the hell out of you. (Molholt’s response: “Good!”)

Super Future Montage, out yesterday on La Société Expéditionnaire, runs a huge and somewhat perlexing sonic gamut. Beginning with a breezy pop opener, “Disappearing Ink,” it leads to moments that are confrontational and chaotic, excruciating and annoying, but travel ultimately back to pop. You’ll hear shrill high-pitched keyboard noises and demented vocal processing horror, but also snappy tempos and gentle psychedelic melodies. You’ll also notice the numerous references to cotton candy, marshmallow, toffee, chocolate, gumdrops, over and over across the 14-track record.

Listening to it feels, at moments, like you’re watching an upset child arrive home from trick or treating, stuff their face full of sweets and lapse into a hyperactive sugar-rush fit.

Actually, the childhood thing isn’t too far off the mark. A good first step to understanding Super Future Montage is by looking at the cover of Laser Background’s self-titled debut EP: it’s Molholt’s actual second grade class portrait in front of the coveted, inexplicably more expensive trippy backdrop. Imagine that the person singing all these songs is that kid, young and gentle-eyed and trusting but a little bit guarded, rather than Andy the artist you see in the photo at the top of this story. (Hat-tip to my wife Maureen for that analogy.)

A second step is by talking to Molholt himself about it. “As I’m becoming older, I realize that the most important time in anybody’s life is your early childhood,” he said over dim sum and smoothies at New Harmony last night. “That’s your formation. Everything that happens to you at that age, it soaks in and that’s you. It crafts you.”

Some people have great childhoods, or at least positive ones. Molholt, who grew up just outside of Philadelphia in Lansdale, had to wrestle with his parents’ divorce when he was young, but he as he recalls, “my parents are pretty level-headed and I had what I would consider to be a really good childhood. I got to explore and be imaginative. It really set the foundations of who I am.”

Not everyone is necessarily that lucky. Molholt goes on to relate the very Philly story of taking SEPTA and watching parents yell in loud and very explicit language at their terrified young children. “That drives me crazy. I wanna be like ‘Your kid’s gonna grow up and kill people!’ But I’m not gonna be that guy and go up and tell them that, but I’ll think about it and write about it.”

In writing Super Future Montage, he takes a dual perspective. It’s not just the kid on the EP cover singing, it’s the grown-up taking an infinite selfie into a few mirrors. “I feel the exact same way about society,” he says. “It’s confusing and doesn’t make any sense. I understand it better now, I just don’t agree with a lot of aspects.”

As a child, he was afraid; as an adult, he’s angry, or sad, and the album finds him working through those feelings in metaphor. Songs reference confusion, mindlessly cluttered living rooms and violence. “The pets are dead / the fridge is empty,” goes a line on “Disappearing Ink.” “It’s about growing up and everything changing,” Molholt says.

“Magic Dust” is also a song with those tones of life and death – it references an expired snail and canary in a coal mine. This was written when Molholt’s old band, The Armchairs, broke up only a month and change after the DIY space he programmed, The Ox, was shut down by the city. The outlook isn’t pessimistic, but more “life goes on” – “I feel like all of life is a transformation, essentially.”

In “Fantasy Zone,” he uses that sugar metaphor we pointed out to recall a romantic relationship that soured several friendships – “I was dating a woman that a couple of my friends were in love with,” he says. “It was a crazy moment where I had to reconcile that I’d hurt these people’s feelings but hadn’t intended to.”

To Molholt, the candy obsession is a reflection of how people internalize their problems beneath an “everything’s great” saccharine outlook. Everything’s not great, he says, it’s often kind of insidious. The song “Fizzy Lifting Drinks” – whose title you might recognize from Roald Dahl’s Charlie and the Chocolate Factory or the Gene Wilder movie adaptation – is literally a recited (sung, shrieked) list of different types of sugary sweets that were pulled directly from the childhood favorite’s pages.

Dahl was a big influence, Molholt says. “He wrote for children most of the time, but it was pretty dark shit.” He points to one of the lines nicked for “Fizzy Lifting Drinks” – “exploding candy for you enemies.” So you give somebody you don’t like a piece of candy and it blows their face up? Kind of twisted, right? But as he sees it, Dahl was, in a subvsersive way, preparing kids for adulthood.

“You’re always dealing with that push-pull with the person you don’t like at the office, or the person who’s trying to steal your girlfriend, or anybody in life you don’t get along with that well but you’re forced to deal with,” he explains. “You’re doing that as a kid too, but you don’t totally get it, you just push them at recess. I think that’s why kids dig Dahl. He’s not lying to them, he’s just spinning [life] in a way where they can understand.”

The wooden horses you see in the music video for “Weird Conscience” can be found at Peace Valley Park in Chalfont, where Molholt played as a child.

The spastic, sometimes warped music of Laser Background is aimed at a similar end. Pop on “Dreamcatcher” – its three-and-a-half minutes of phase-shifting 8-bit synth notes pile up into a cacophonous peak, before releasing back into a gentle guitar, swinging harmonized vocal and sad resolution: “Home is an awkward place where we can’t put food on the table / so we’ll just sit and stare into empty space.” Or the skittish “Sideling Hill,” which gives the vibe of a merry-go-round gone out of control, circling unstoppably into oblivion: or, as he sings, “phosphorescent violence coursed with radiant evil.” Uh, what?

“That’s how you push the boundaries well,” Molholt explains of the album’s sometimes confrontational sound. “You give people something to latch on to, but you twist it just a little bit in the middle.”

When he was in The Armchairs, Molholt expressed a great admiration for subversive art – bands like Ween (“they followed up their most significant album, Chocolate and Cheese, with 12 Golden Country Greats. That’s like a big ‘fuck you’ to everybody.”) and performers like Andy Kaufman. Of the latter in particular, he spoke of how he liked the way Kaufman pushed his audiences to the edge and brought them back; then pushed them to the edge again and over the edge, and pulled them back. It’s what he’s doing with music in Laser Background.

I ask how he’s grown since that band dissolved. “Being on my own has made me a better musician and a better songwriter,” he says. “I never got to experience writing a song completely on my own, we would always flesh out ideas as a group.

“And this also feels more honest,” Molholt continues. “The Armchairs had a lot of artifice, we were always trying to outdo ourselves. And that was cool, that was fun, and it will always have a place in my heart. But I wasn’t to make something that’s who I am, and what I stand for. This is much more personal to me.”

Laser Background performs tonight at Johnny Brenda’s with Darwin Deez; tickets and information on the 21+ show can be found here.