Tumblr of the Moment: Emily Simpson's #worklife aka StagePatchLady - WXPN 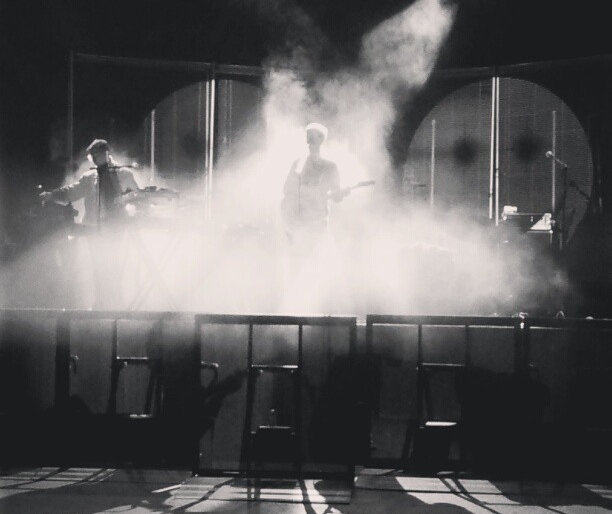 Tumblr of the Moment: Emily Simpson’s #worklife aka StagePatchLady

For concertgoers and music fans the world around, backstage has a total allure. Whether you’re giddily imagining hedonistic David Lee Roth style parties in the green room, or just an audio nerdio who relishes the tech perspective of live productions, there’s a sense of innate curiosity associated with just about everything that happens in the wings and beyond them.

For Philly’s Emily Simpson, backstage is her job; she’s a stage manager and patch tech at Union Transfer. This means she leads the bands on and offstage, works with artists and front-of-house engineers to set up their gear in the most efficient way, makes sure microphones and cables are plugged in properly and don’t clutter the performance area, cleans up spilled beer during the show, et cetera. “I’m kind of a jack of all trades,” she laughs. And her phone is always at her side, meaning she gets to shoot pictures from an angle that the general public doesn’t usually get to see.

Simpson recently collected these photos into a new Tumblr called #worklife – named for the hashtag she uses to organize the photos on her Instagram account – and it’s a lively behind-the-scenes view of one of the busiest mid-size venues in the region. She writes that the site “is designed as a way for me to curate those pictures as well as the memories attached to them.” For each photo she posts, she shares thoughts on what it depicts – whether its a short and general memory of the concert or a indepth and specific description of what we’re seeing. “I never really realized just how many stories I had associated with each show until I did this,” Simpson tells us.

As she writes on its about page, the blog is essentially “part self-serving reflection, part archiving exercise, all a little bit ridiculous.” Take a look at some of Simpson’s photos below, and follow the entire collection at stagepatchlady.tumblr.com. A photo of The Story So Far shot on April 5th of this year. “The general rule of thumb is that when you get one pop-punk band on a bill, you get at least another three – frequently four,” Simpson writes. This photo was shot “not long before his vocal line was ripped out of the stage box by some kid who didn’t pay attention to where he was two-stepping.” She had to run out onstage in the middle of the set to set the cables straight. The stage split, aka the box that all the microphone cables get plugged into. This is one of numerous similar boxes that Simpson has to keep tabs on during any given concert. A backstage shot of Deerhunter earlier this month – the one where frontman Bradford Cox went on a tirade putting down the crowd, his bandmates and the overall concert experience. “I still don’t know how to talk about this show,” Simpson writes. “It was the first time I had ever seen someone have a mild nihilistic breakdown onstage. The fact that two days later, I am still listening to ‘Nothing Ever Happened’ on repeat is indicative of something, though. Chris Koltay is probably a saint in addition to being a very good FOH engineer.” “I’m not sure how this came about, but it’s a running joke in production.” A colorful stick to make sure all the microphones are turned on before the band takes the stage. Washed Out playing Union Transfer last month, from Simpson’s point of view. She sees giant shadows that most of the crowd doesn’t get to. “Spring break, production style – sit outside in your black hoodies and cable a monitor mix so you can listen to old punk music in the sunlight.” The end of the night for the crowd is just the middle of the night for Simpson. Thankfully it can be amusing watching the audience vacate the premises – or not, as it were. “After the first CHVRCHES show at the venue, their FOH engineer put on a playlist that began with LCD Soundsystem’s ‘Dance Yrself Clean.’ This is what happened.”