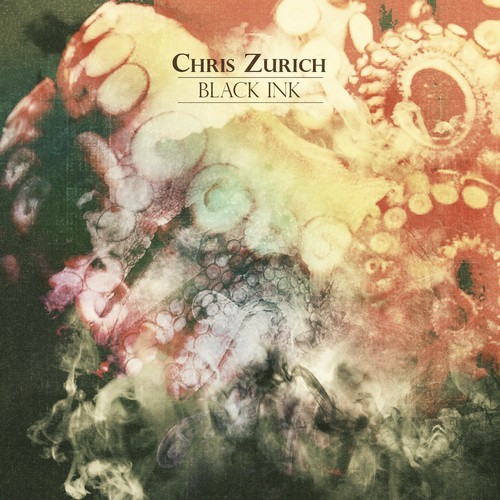 The release of Chris Zurich‘s LP Black Ink next week is a new beginning of sorts for the West Philly experimental singer-songwriter.

In spring of 2012, after a few older projects had run their course, he recorded the lush and evocative album with a fresh group of players. He was calling the band New West – which also happens to be the name of an Americana record label. A cease and desist later, and Zurich had to rethink what he wanted to do with this body of music they had worked on; a year and a half later, it’s being released under his own name.

Before the name change, it was a journey for the music on Black Ink to go from brain to recorder. As Zurich tells us, “I had a lot of left-over material from a previous band and decided to take matters into my own hands by recording a handful of solo demos, where I played all the instruments.  When I was finished, I put what I had online and asked, ‘who wants to join me?’  I wanted to see what sort of interesting musicians I’d meet and what unique talents I’d encounter.  I had already started booking shows, so if people came on board, my attitude was ‘great, come join me.’  If not, I was prepared to play them solo.  And luckily, a band came together out of that and helped me complete the tracks that are here.”

Thematically, the record is a study in private versus public realities, a look uncomfortable truths we all confront in life and how we decide whether to bring them to the attention of those around us. Zurich explains, “The cover has an obscured octopus shooting out black ink, like they do as a defense mechanism.  That visual is sort of representational of the theme of the album, since it was a balancing process of figuring out how much to reveal and how much to obscure.”

Black Ink will be released this coming Tuesday, October 15th. Listen to it in its entirety below; after the jump, Zurich shares background about each song on the album.

“Annie” is about an unconditional love who supports you, regardless of if you’re in good times or bad.

“The Sounds? is a song about waking up to your partner murmuring another person’s name in their sleep.

“Doomsday” deals with gender roles and sending our “boys” off to war, and how that effects our expectations of the right ways to act masculine.

“Bend Song” is complicated because its about love but its also about the sacrifices you make for music or being a musician.

“North of Sky” is about a conversation with a child in heaven that didn’t live.

“No One Escapes” is about watching the town you grew up in change over the years to become something you don’t recognize and also how no matter where you go, pieces of it never leave you.

“Nothing Around Me” is inspired by a falling out with a bandmate, who had been a friend since younger days.

“All Night Long” has a metaphor of a fish washed on shore and the feeling of being between two worlds. Its glimpsing another reality, though knowing you’ll still return to your own.