The Wonder Years will kick off acoustic holiday party tour in West Chester, bring Young Statues along for the ride - WXPN 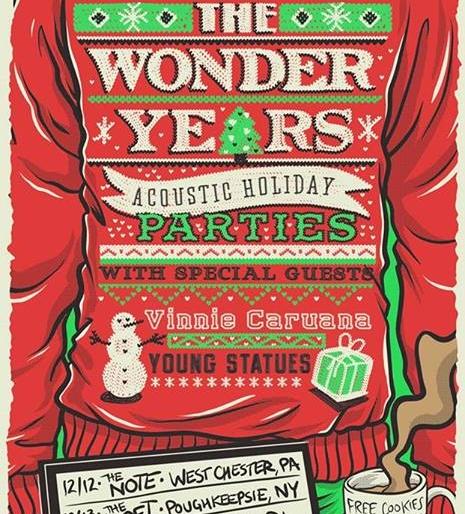 The Wonder Years will kick off acoustic holiday party tour in West Chester, bring Young Statues along for the ride

Philly-area pop punk heroes The Wonder Years announced a round of acoustic holiday party shows this December, kicking off on the 12th at The Note in West Chester. Tickets to the all-ages show are $15 and go on sale this Friday, October 18th via Ticketfly.

The band is still supporting its outstanding 2013 LP The Greatest Generation, released this spring. The album saw TWY’s songwriting scope broaden from slice-of-life stories told by a crew of South Philly punks to more resonant, introspective, dare-I-say philosophizing studies of the American Dream; how it means different things and plays out in different ways for different segments of the population. It’s The Wonder Years’s most mature offering to date, and worth exploring if you haven’t heard it yet. (Stream it via Hopeless Records’ YouTube channel here.)

Joining the band on the run is Young Statues, the South Jersey emo-pop five-piece who recently released the Age Isn’t Ours EP (as well as a couple collections of cover songs), and is hopefully due for a new full length in 2014. Along with Vinnie Caruana of The Movielife, the crew will tour up through upstate New York and Rhode Island, and hopefully they aren’t joking about the free cookies and hot chocolate for attendees wearing an ugly Christmas sweater.

In related news, Philly epic punk crew Restorations announced today that they will be on the lineup of The Bouncing Souls‘ December 29th Home For the Holidays grand finale – along with Delaware hardcore heroes Boysetsfire – at The Stone Pony in Asbury Park, NJ. Four-night passes are available now via the Chunksaah Records website.