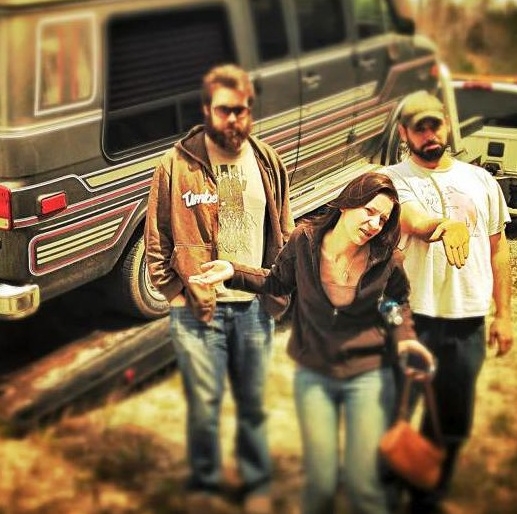 Pennsylvania three-piece HogMaw has built a reputation over the past few years as a sting band that breaks down the walls of what a string band can be. For a while, it used the word “thudergrass” to describe its sound – bluegrass informed by rock and roll energy, and yes, a little bit of heavy metal technical dynamics.

The band has frequently performed in the campground of the Philadelphia Folk Festival, and played the mainstage in 2011 for the fest’s 50th anniversary; it also gigs regionally and nationally on the bluegrass circuit, and its latest outing, Ideal Proof, finds HogMaw reeling back its boundary-breaking side to record a set of traditional songs.

The album was produced by Dom Flemons of renowned folk crew Carolina Chocolate Drops, who the band connected with when they performed together at The Strand Capitol Performing Arts Center, and we swapped emails with Colin Reeves of HogMaw to find out about how the project came about.

“We released our debut album Wake last summer,” Reeves writes. “It’s all originals and has more of a ‘newgrass’ feel. We would tour and play some very traditional bluegrass festivals and concerts and some old timers would literally walk out and turn their noses up at our original tunes, which is the price you pay for being an artist.”

But traditional songs are what got these players – Reeves on a variety of instruments, from mando to dobro, Matt Baldwin on guitar and Ryann Lynch on fiddle –  into bluegrass and folk music. It’s the stuff they played around campfires for years.

“So last year we started throwing around the idea of maybe doing a more traditional album of some of our favorite tunes,” Reeves continues. “It was a way to prove to everyone, and more importantly ourselves, that we could play traditional music and more ‘songy’ songs instead of in-your-face shredding bluegrass and newgrass tunes.”

They thought Flemons would be the ideal producer to help them bridge the worlds of the old and the new: some emails and an Amtrack ticket later, and he was sitting in on one of their sets in Lancaster and working with them in the studio for a week.

Reeves says songs that will make the album are a mix of ones we chose and ones Flemons brought to the table.

“I think a couple he had wanted to do with the Drops but never got to,” he continues. “We had a long long list and started playing them and narrowing things down until we got ones we felt really good about. Some we’ve played live a bunch, some we had never ever played before, but we all felt they had life and were worthy of the record.”

Flemons was evidently so happy with the project that he invited HogMaw on the road with him this fall. They’ll play songs off the new record together and performing as his backing band; you can catch them performing locally on The Folk Show with Gene Shay on WXPN on Sunday, October 27th, then at The Strand Capitol on November 3rd and The Sellersville Theater on November 5th. Tickets and information on the concerts can be found at the XPN Concert Calendar.

In the liner notes that will appear on Ideal Proof, Flemons writes that both band and producer wanted to find something that would play to traditional bluegrass standards but also display HogMaw’s strengths as a group.

“Whether it be by getting up and jumping to your feet,” Flemons says, “or just sitting and listening to the sounds of the strings, this record is for those who have a strong love for string band music and a strong love for the spontaneity and vitality of truly great bluegrass music!”

Below, listen to HogMaw’s rendition of the traditional number “Darlin’ Corey” from Ideal Proof; for updates on the album and the tour, follow the band’s Facebook page.