Photo by Allison BergerVanessa Carlton played piano for a sold-out crowd on Sunday night at World Cafe Live. In just over a decade, the singer-songwriter has pushed out four under-the-radar albums, with a fifth on the way. Oh, and a baby. She’s pregnant with her first child! While she doesn’t look like she’s aged a day, Carlton’s songwriting has matured with elegance, creativity and grace. No longer are singles sweet and syrupy (she’s 33, not 21), and instead often reflect on the passing of time, finding yourself, and relationships come and gone.

After lighting a set of candles perched on the edge of her piano, Carlton touched upon tracks from all five albums, starting things off with “Carousel,” the opener from 2011’s Rabbits On The Run, and trickling her way through songs from 2007’s Heroes and Thieves, 2004’s Harmonium and of course, her breakthrough radio hit from 2002, “A Thousand Miles.”

Longtime fans sang along with the poetic “White Houses,” a song that was censored by MTV in 2004 due to it’s sexual nature (what a joke, right?). It may be more of a cult fave than “A Thousand Miles” ever was- and Carlton was pleased to play it. “The lacrosse players always knew the words to this one,” she laughed, reminiscing about a college tour she did a few years prior. “Which is pretty funny, especially when you think about what the song is really about.” 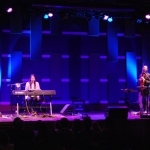