Unlocked: In deep with The Lawsuits - WXPN

Unlocked: In deep with The Lawsuits
Artists

Unlocked: In deep with The Lawsuits

It’s a beautiful Sunday afternoon in October, one of the last handful we’re bound to see this autumn, but The Lawsuits aren’t spending it outdoors.

They’re in the basement of a rowhome in East Kensington that doubles as HotBox Studio. Brendan Michael Cunningham, bassist for the Philly five-piece, lives upstairs, the band rehearses downstairs when the studio is not in use, and for the past two hours they’ve been kicking around the setlist for their album release show tomorrow night at Johnny Brenda’s.

A string of light-up orbs hangs from the blue-grey soundproofing pads installed around the room; singer-songwriter Brian Dale Allen Strouse slips on a bright red Gibson guitar and the group slides into its first stab at “The Workings Of You” from their new album Cool Cool Cool. It’s a jangling barroom pop tune with a vaguely worldbeat feel; think of it as the Philly five-piece’s Vampire Weekend moment, but with bottleneck slide and doo-wop harmonies mixing into its complex structure. Those harmonies, it seems, are problematic. 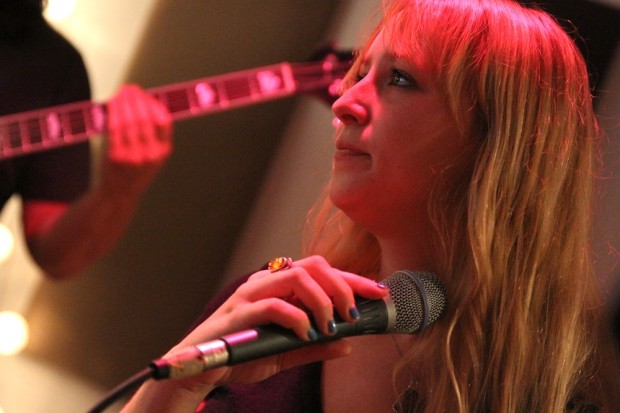 On the album, singer Vanessa Winters handles the “sh’na-na” line and it’s swooping, counterpoint “ooooh”, both of which are layered and multitracked numerous ways from Sunday. Live, she’s got a harmonizer pedal – which helps recreate those nuances somewhat – but to soften its robotic sound, and also to lend that additional voice, drummer Josh Friedman and Cunningham chime in on vocals. Or at least that was the plan, but the first take doesn’t go so hotly. The second is better, but still shaky, and ultimately Friedman puts his sticks down, takes a breath and glances around the room.

The Lawsuits breathe a collective sigh of relief. Cunningham nods his head and says “These things have to be really tight. They’re really complex rhythms, and my bass playing, your drums, they have to lock in.”

Winters agrees: “I find that to be more important than the ‘sh’na-na’s.”

Democracy in action. The band hits it one last time with Winters alone on the vocal and, pleased with the results, they abscond to the kitchen so Cunningham can get a mid-rehearsal frittata cooking on the stove. With the scents of Italian sausage, cheddar cheese and cigarette smoke wafting in the air (not as jarring a juxtaposition as it sounds), we each grab a plate and slip out to the back porch to take in some of the afternoon before the sun goes down.

I begin by asking whether the scene I just witnessed – already reworking their new songs, even though the album was just finished and released – is common. Strouse nods. 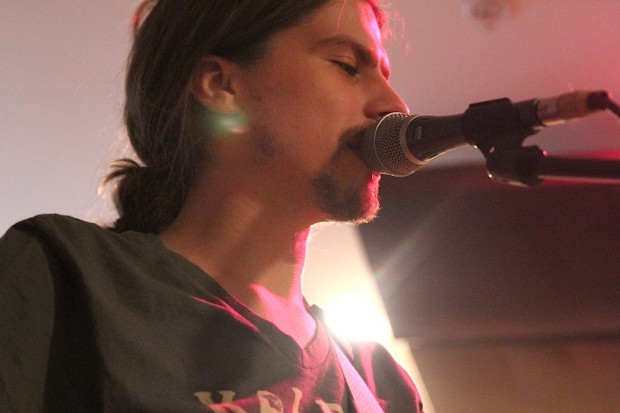 “The goal, the whole goal of making the album was to go in and make the best possible record we could make,” he says of Cool Cool Cool. “So if that meant that we needed four thousand guitar tracks in order to get that, then fine. But then trying to actually play it out live is a whole ‘nother game.”

“I mean, what’s going to stand the test of time?” Cunningham ads. “People talking about our live show? Or people listening to the record?”

So The Lawsuits as a live band – which also features guitarist Joe Bissiri, who they met while recording at East Falls’ Waking Studio with producer Bill Moriarty – has spent a lot of time deconstructing the record that it built up on tape.

“‘Long Drive Home’ has had so many different incarnations,” laughs Winters.

When the band recorded it for their Key Studio Session earlier this year (check out the above video shot by HotBox’s Matt Smith), it was snappy and upbeat, definitely carinvalesque. For the album, the tempo is slowed waaay down; it’s much more murky and mysterious, and Winters’ breathy noir-ish jazz vocals sound like they’re coming from a David Lynch chanteuse. The version I’d just heard them play in the HotBox basement was a middle ground that preserves the pace of the early version but embraces the mystique of the album version.

“I don’t like it too slow singing live,” Winters says. “It kinda just loses the oomph a little, for me personally. So the changes there are probably my fault.”

Thinking broadly, I pose a question to the group – are The Lawsuits’ songs an ever-evolving thing?

Strouse fields that one: “I don’t personally think that they are ever done. I think that’s one of the things that’s cool about it. We’re not The Grateful Dead, so it’s like it’s not every show you see, the songs are going to sound different. But we lean more towards that than we do maybe creating a studio album and then doing the same thing every night.” 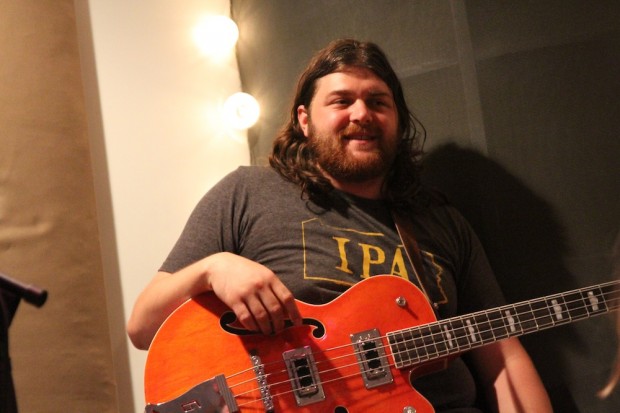 It’s a delicate balance, and one this group of friends – some grew up together, some separately, all in Bucks County – has worked out since forming the band in their post-college years in 2011.

Winters and Cunningham (and HotBox’s Smith) have been tight since their days at Edgewood Elementary School in Yardley. Friedman and Cunningham shared a guitar teacher, and jammed for the first time at a recital at age sixteen. Everybody randomly reconnected at Temple; Strouse, who was raised in the nearby artistic-minded community of New Hope, and went to New Hope-Solebury school district, connected with the group through a mutual friend, and they began as a straight-up blues band that probably played back home more often than Philly.

“We realized it was very easy to get a good response if you went up there and played a blues song, soloed and turn your amps up, you know, really loud,” Strouse laughs. “And Josh did crazy drum solos. And we just went for that. Then we started, uhh, trying to actually make better music.”

The Hot Love EP in 2011 carried some of that blast-off-the-speakers, party-in-the-pub vibe. It basically sounds like a CD a truck driver might pick up in the $5.99 bin in a rest stop off of I-70 near Topeka, Kansas. If you just straight up listened without context, you might think that they were an up-and-coming country and western band from the Midwest, not a group of young musicians from suburban Philadelphia.

Last year’s Numbers dialed that sound way way down; it’s basically an EP of haunting, introspective folk songs where everybody plays, but they play extremely quietly. When songs like “In Deep With the Queen” are performed live, they’re amped up into dramatic rockers. “We tried to play quiet, we really did,” says Cunningham. 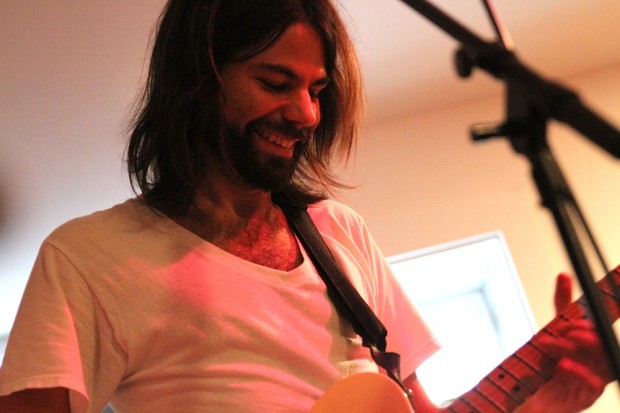 Bissiri connected with The Lawsuits at a crucial juncture; they entered Waking Studio to record with Moriarty, and he co-engineered, and played a few parts on the album. Working in Waking, Friedman says, was the wake-up the band needed to snap it out of it’s unilateral, genre-oriented approach.

“Those EPs were just done ourselves,” he says. “There was no third party there to bounce ideas off of and say ‘that’s terrible, don’t so that.’” They laugh about it, but having Moriarty as a guide impacted the new recordings tremendously.

Friedman recalls the first day of recording, where he set up on the studio drum rug and Moriarty asked him simply to record a couple hours of drum takes. He encouraged him to try beats differently, blend techniques from earlier rounds with tempos on later rounds, then mixed and matched them in post into a new, layered, textured mass of percussion. Which, Friedman admits, “didn’t sound all that cool. But that doesn’t matter. The whole point of it was, it was like an exercise to show us ‘we’re open here.’ Like, Bill was open to do anything, to try anything…and that was the moment where we realized what the album could be.” 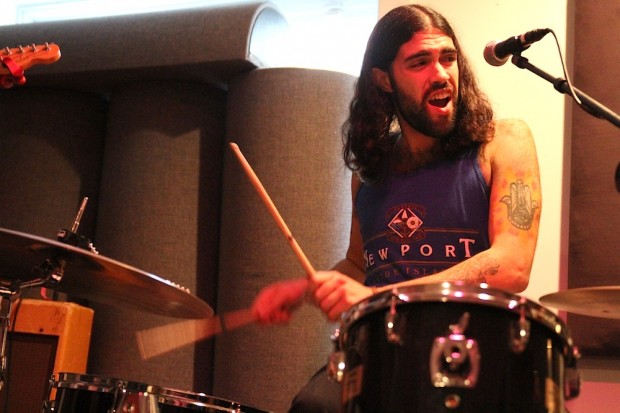 That is to say: a more accurate picture of the band’s eclectic live shows, and a true picture of their varied musical tastes and influences. And also the work of a songwriter (Strouse) who can bust out a tune at the drop of a hat. The band went into Waking Studio with 30 songs. That’s 30 songs they had worked out as a band; Strouse had plenty more in his notebooks (the word “hundreds” is mentioned at one point). I’m pretty sure he went home from our interview and wrote a song.

I ask how long he’s been writing music. He tells me since age 12.

“I remember, I picked up my father’s guitar randomly one day,” Strouse says. “It didn’t have all the strings and it was out of tune. But I just started doing stuff. And from there, I would just start writing songs. So I was writing music before I actually learned how to play the guitar.” 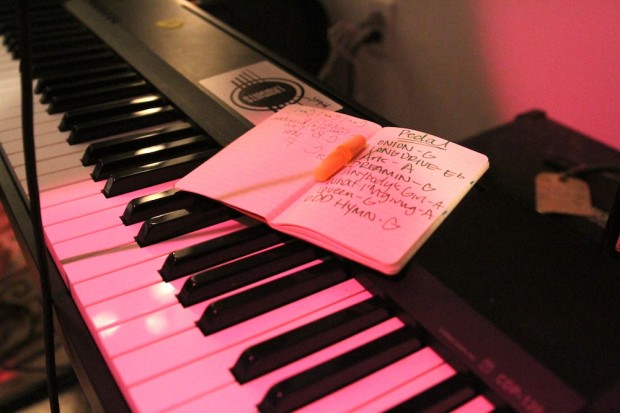 His father, Walter Strouse, is a songwriter as well, and spent much of the 80s and 90s working in the children’s music circuit. Brian had his first appearance on the radio as a young boy, singing backup for his old man. And though he tells me that his dad ultimately decided the market was too tough of a nut to crack, his songwriting lives on – in “The Workings of You,” the track that the band was trying to make just right in the rehearsal space when I walked in on them.

“That was a song he wrote in the 80s, but the original version of his was, you know, very much different,” Strouse tells me. He adapted his father’s lyrics and melody somewhat to fit his own vocal range and worldview. But the ideas is there. “The concept of these ‘workings of you.’ That all these things that are good in my life or all these things that are bad in my life are result of ‘the workings of you.’”

“You” being someone’s parent, a loved one, a friend. A group of friends. A group of musician-friends and their extended family, bound together by instruments and melodies, warm strings of porch lighting strung up on the basement walls, and by pure catchy pop songs. 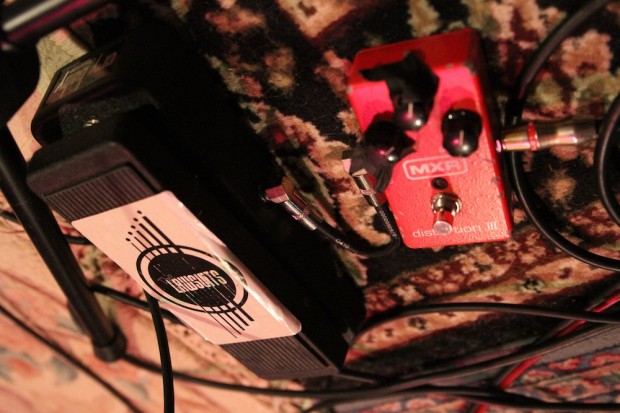 Cool Cool Cool is the featured album in this week’s edition of Unlocked. Download the song “Dreaming #26” in Monday’s post, read Tuesday’s album review, check out the road trip vibes of the “Love is Weight” video in Wednesday’s post, and look for more tomorrow.