From cha-cha to Coltrane, what keeps Poncho Sanchez celebrating Latin jazz after four decades? (appearing Saturday at MCCC and The Clef Club)
Artists

From cha-cha to Coltrane, what keeps Poncho Sanchez celebrating Latin jazz after four decades? (appearing Saturday at MCCC and The Clef Club)

Soon to celebrate his 62nd birthday, on the verge of entering the fifth decade of his career, Poncho Sanchez admits that the grind of touring is beginning to wear him down a bit. “I’m starting to get a little tired of jumping around,” says the master conguero and bandleader, speaking from his L.A. home. “It’s a little rough, but the spirit and the soul and the feeling of the music is what keeps me going.”

Although it’s the performance aspect that Sanchez is referring to, his continued excitement about the music that he plays and loves is evident even over the phone. He may be growing weary of waiting in airport security lines and lounging in hotel lobbies until check-in time, but his enthusiasm for performing and advocating for Latin Jazz is undimmed.

“To me,” Sanchez says, “Latin Jazz is the best music in the world because it has the sophistication of jazz melodies, jazz harmonies and jazz theory, yet it has the flavor and the rhythms from Africa and Cuba underneath and you can dance to it. How can you beat that?”

Sanchez will bring his eight-piece Latin Band to Montgomery County Community College’s Science Center Theater on Saturday night, kicking off the school’s three-concert “Then and Now: Jazz Cubano” series spotlighting the influence of Afro-Cuban rhythms and traditions on modern jazz. The series continues in November with Cuban pianist Omar Sosa’s Afri-Lectric Experience and in December with Ninety Miles, a project in which jazz luminaries Stefon Harris, David Sanchez, and Christian Scott collaborate with Cuban musicians.

“We have taken our audience on an artistic journey through a curatorial thread that examines African music in the New World over the last several years,” says Helen Haynes, MCCC director of cultural affairs. “Jazz is a nexus of cultural exchange and its interculturality has created a contemporary music for the New World.”

Sanchez’ performance will explore the history and continued influence of Afro-Cuban music in jazz, weaving together recent and upcoming projects with highlights from his own estimable legacy. The set will draw in part on Chano y Dizzy!, his 2011 collaboration with trumpeter Terence Blanchard paying tribute to the landmark meeting of jazz legend Dizzy Gillespie and Cuban percussionist Chano Pozo. Mention those names to Sanchez and he launches into a history of the music and these two influential artists’ contributions.

“Latin Jazz is our music if you’re an American, because Latin Jazz was born in the United States of America, in New York City,” he explains. “And Chano Pozo and Dizzy Gillespie invented Latin Jazz. Sometimes people raise a slight argument saying, ‘My uncle did it three years before they did in a garage in Cuba.’ I don’t know about that; the world didn’t know about it then. The world found out about it because of Dizzy Gillespie and Chano Pozo.”

Saturday’s concert will also preview music from Sanchez’ next release, a tribute album to John Coltrane. The repertoire for that project includes the saxophonist’s signature tune “Giant Steps” reimagined as a rumba, “Blue Train” as a cha-cha-cha, and a new arrangement of the lesser-known “Liberia” from the 1960 album Coltrane’s Sound.

While Coltrane experimented with a variety of rhythms and musics during his ground-breaking career, the marriage of Trane’s music and Latin Jazz is a less obvious undertaking for Sanchez than the tribute to Gillespie and Pozo, who are more direct antecedents of his own music.

“I’ve had this band for going on 33 years,” he says, “so every year you try to top yourself or at least do something as good as the last one. You always try to come up with new ideas and new concepts, not just to keep our musicality up and keep our souls and minds fresh, but it’s also good for business. To be a successful bandleader you’ve got to keep fresh, new ideas coming in all the time.”

Coltrane was an obvious choice, according to Sanchez, because of his lifelong admiration for the legendary tenor player – an admiration that has occasionally manifested in unusual ways. During his high school days, a jazz radio station in his native Los Angeles announced that Coltrane would be in the studio for an interview. Sanchez stayed home from school that day to listen, and recalls the DJ wrapping up the interview by asking Trane his favorite food. 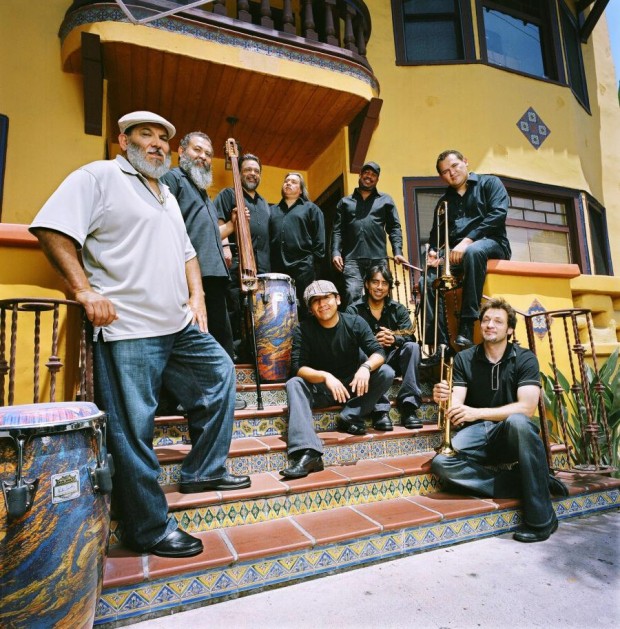 “All the other cats are in their 30s and 40s. So they keep me fresh and young.” Poncho Sanchez and his band perform at MCCC Saturday | Photo by Devin DeHaven

“I wondered if he’d say ribs or chicken or beef,” Sanchez recalls. “There was a pause and John Coltrane said, ‘Sweet potato pie.’ And I said ‘Sweet potato pie? If John Coltrane likes it, I’ll like it too!’ So I asked my mother to make me sweet potato pie. She was from Mexico, so she said, ‘I don’t think so, but I can make you camote’, which is a dessert from Mexico made from the same things. I ate that for two weeks straight, until my mother got tired of making it for me. That’s how much of a John Coltrane fan I am. When I really respect and love somebody, I want to be like them, live like them, try to do what they did and see if it rubs off a little bit.”

Whether or not the sweet potato diet made an impact on Sanchez’ playing, his mother’s Mexican spin on a southern American staple is indicative of the conguero’s own Latin spin on the jazz tradition. Born in Los Angeles in 1951, Sanchez is the youngest of eleven children. The only musician in the family, Sanchez nevertheless reaped the benefits of his older siblings’ love for music.

One of the hippest artists that the family collected was Cal Tjader, the pioneering Latin Jazz percussionist. So it was a dream come true when Sanchez was invited to join Tjader’s band in 1975 – even if his siblings managed to slightly deflate that dream in the way that only family can. “I used to fall asleep to Cal Tjader’s music,” Sanchez remembers. “So for me to get the gig with Cal Tjader’s band was unbelievable. In fact, my brothers and sisters didn’t believe me. When he hired me, I came home and told my sisters I was in the Cal Tjader band and they laughed. They said, ‘Poncho, you’re good, but Cal Tjader’s great. You have to be great to be in his band. Look who’s been in his band – Mongo Santamaria, Willie Bobo. You’re good, but you ain’t that good.’”

As it turned out, he was good enough to remain with Tjader until the bandleader’s death in 1982. At that point, Sanchez embarked on his own career, and has continued leading bands for more than thirty years. Undoubtedly some of his own signature tunes – “Watermelon Man,” “Besame Mama,” “Yumbambe” – will also be on the program for Saturday night’s performance.

Prior to the concert at MCCC, ethnomusicologists Robin Moore from the School of Music at the University of Texas and David Garcia of the University of North Carolina will lead a panel discussion entitled “Cubanidad: Race, Identity, and Politics in Afro-Cuban Culture.” And that morning, Sanchez will host a workshop at the Clef Club in Center City relating the history and evolution of Latin Jazz.

As for the performance itself, no matter how grueling his schedule may become, it’s obvious that Poncho Sanchez still feels he has something to prove. “I’m the oldest guy in the band,” he shrugs. “All the other cats are in their 30s and 40s. So they keep me fresh and young. I hear them playing and say, ‘Hey, you can’t top me!’ It makes me dig down a little deeper and find some stuff.”

Poncho Sanchez and his band perform at the Science Center Theater at Montgomery County Community College Saturday October 26th at 7 p.m. Tickets and information can be found here.