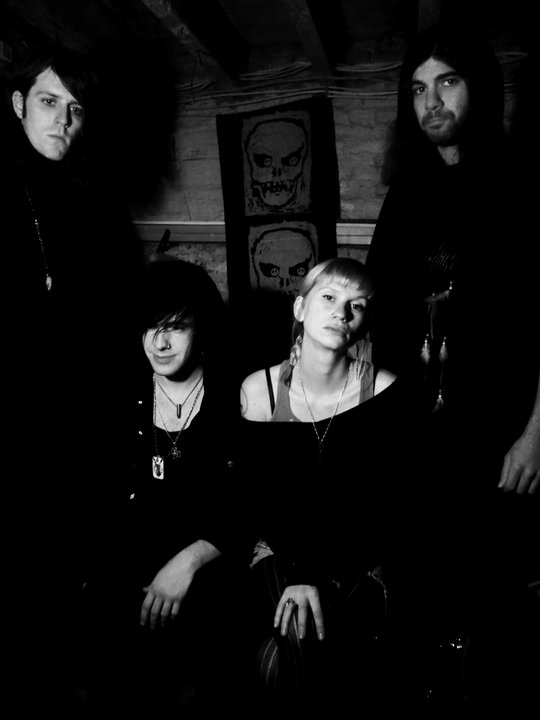 Far-Out Fangtooth’s, lead guitarist Nick Kulp was in a debilitating car accident. Bassist Tania Mesterhazy’s father passed away. Joe Kusy, the band’s rhythm guitar player, was unemployed for about three years, sending him into a depression. These are just a few of the unfortunate, rather traumatic, events that have shaped the feel of this goth-leaning neo-psych band.

“There are definitely things in our lives that we figured out after we became friends that we all related on,” Kulp says. “But it also comes from upbringing and earlier parts of life that have shaped the way we are now.”

An overtly dark and foreboding drone makes this four-piece sounding a bit morose on their second LP, Borrowed Time on Philly’s own Siltbreeze Records. Some of these burners brood like the night after a plague, others bore through ear canals like a gravedigger on a post-funeral afternoon. “Bow Your Head” is exactly the latter, starting the album like a king’s sudden call to arms and marches out with sizzling wah-guitar fuzz. “Beyond Your Bones” is a desolate goth-like analysis of one’s place in the crowd before being shrouded in walls of sound.

But Kusy and Kulp agree that the band is largely conceptual, portraying a feeling rather than making a firm statement or necessarily tell specific stories. “There’s a world where the music comes from,” Kusy adds. “It’s definitely coming from a certain place.”

Each member of Fangtooth are former art school students, which explains the high art sentiment.

In turn, that’s also led to the far-out bandmates designing the layout of each of their releases. It was through Kulp’s screen printing work that the band got on the radar of the Committee to Keep Music Evil, a label focusing on all things psychedelic run by Anton Newcombe of Brian Jonestown Massacre. Kulp had done a flyer for a show a few years back for the Lovetones, another band on the Committee label, which got Fangtooth a gig at Fishtown’s Westmoreland Warehouse promoted by CTKME.

Kusy and drummer Vinnie Alvaré have been playing in different bands together for years and Kusy is a habitual home recorder. They’re the half of Fangtooth that has a taste for more psychedelic sounds; whereas Kulp and Mesterhazy cut their teeth on harder hitting punk rock since their high school days in New Jersey. Alvaré and Kusy share song writing responsibilities evenly with Kulp, splitting the nine-song Borrowed Time into three songs each. 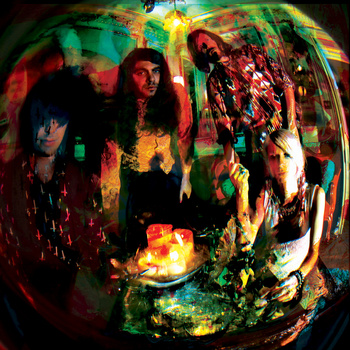 The band writes their sullen music collectively. And the key words in what Kusy just described are “Vinnie wrote.” Alvaré’s departure from the band was brought on this year when he moved to Florida, citing relocation and the costs that came with it as being a large part of no longer being able to contribute to the band.

“We’ve also always set goals,” Kulp says. “First it was something like going on tour. And then it was to put it a real record out. So the next step for this [record] is that we want to go to Europe. We still haven’t gone to Europe. And we’re obviously not living off of it, so it’s kind of a lot of dedication to have for it not being your source of income. Also when we weren’t sure if Siltbreeze was putting the record out, I think he started to hesitate a bit.”

However, Alvaré’s identifiable drumming style of standing while playing with a cocktail-like kit in front of him isn’t leaving the Fangtooth vocabulary – new drummer Jen Zimmerman will tour with the band through November, and plays in the same fashion. In fact, Alvaré’s drumming is a defining factor in their ominous sound; the ride cymbal he used in Fangtooth is heavy, sounding like a blacksmith hammering a red-hot piece of metal into shape on “Get Around” and allows him to roll on it on “Bow Your Head.” Alvaré also contributed vocals in their live setting, which Kulp says he’s replacing by adding layers with his arsenal of effects pedals.

“It just sort of happened that way,” Kusy says of writing songs with a minimal approach. “Since we’re all artists, we respect each other’s say in the band.”

As for the title of their new record, that was Mesterhazy’s contribution. Rather, it reportedly came to her in a dream. It was simply a voice that said, “We are living on borrowed time,” and she mentioned she thought the voice may have been her recently deceased father. Kusy says she’s a “gnarly chick,” with an interest in the occult and makes jewelry out of bones she buries and digs up later. So the rest of the band believed her, but didn’t think it was some sort of any spirit conjuring.

“At the time, for months, I was like, ‘what are we going to call the new record,’” Kulp says. “And then after Tania mentioned the voice she’d heard, I asked the others if it would be weird for me to ask Tania if we could use that.”

They discussed for a time and thought it was great because of how “intense” it seemed, but were afraid it may have been a little too personal for Mesterhazy to approve using. En route to a gig, though, Kulp asked her nonchalantly and to their surprise she liked the idea without any reservations.

There was a similar feeling for bringing Justin Pittney of Moon Women in to produce Borrowed Time. He’d also produced last year’s EP The Thorns. They’d employed him because of his taste for in-studio effects, making it more filled-out and sonically lush, an improvement from the more spare debut Pure & Disinterested. He appropriately makes shakers on “Green Hands” sound like water dripping in the back of a cave and vocals sound like the souls being exhumed from their graves on “Stretch/Lips.”

“As far as I see it, he was almost like another musician on the album,” Kusy says. “He could be listed as playing ‘effects.’ He had his hands on all of it.”

The message is clear on Borrowed Time. And the far-out concept, despite being dark as night, is something everyone’s felt before.

Far Out Fangtooth celebrates the release of Borrowed Time on Saturday, November 2nd at Boot and Saddle. Tickets and information on the 21+ show can be found here.