All photos by Melody Chiang

UK born electro pop sensation James Blake entranced a sold out Union Transfer crowd on Monday night with a soulful performance that was nothing short of spellbinding. The young Blake, who won the prestigious Mercury Music Prize this year for his album Overgrown, is no ordinary electronic outfit: instead of enticing you to bounce against the walls like a wild banshee, his live shows pull from the depths of your soul and ask you to simply feel, and that’s precisely what went down at Union Transfer. 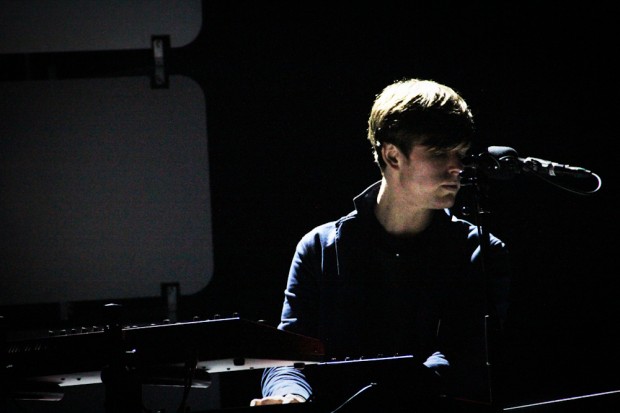 The set opened with the bone chilling and hair raising track “I Never Learnt to Share” from Blake’s self-titled album released back in 2011. From the shrills and shrieks that accompanied the opening vocal loops the early number was clearly a crowd favorite. Blake did a beautiful job of incorporating beloved older tracks that early fans yearn for with songs from the most recent release Overgrown, his most widely popular album yet. At a climatic point in the performance Blake began with the more digitized and bass-heavy “Air and Lack Thereof”, a single from way back in 2009, before transitioning into arguably his most popular track “CMYK”, which features rare outside sampling from R&B artist Kelis (Blake’s usual MO is to use his own vocals). Naturally, the whoops and woo’s from the crowd were in full force.

In the relatively short time Blake was on stage, he managed to perform almost all of Overgrown to the delight of many who became introduced to Blake’s music following the album’s release. One of the most beautifully intimate parts of the set came with Blake’s performance of “Our Love Comes Back”, featuring soft vocals in a slower loop that made our hearts jump and throats lump. It was so moving you could hear a pin drop in the max capacity venue (in reality it was the soft clinking of glasses from the back bar that emphasized the silence). He continued to pull from Overgrown with “I am Sold”, “Digital Lion” and the initial track release “Retrograde” that garnered the album so much attention. 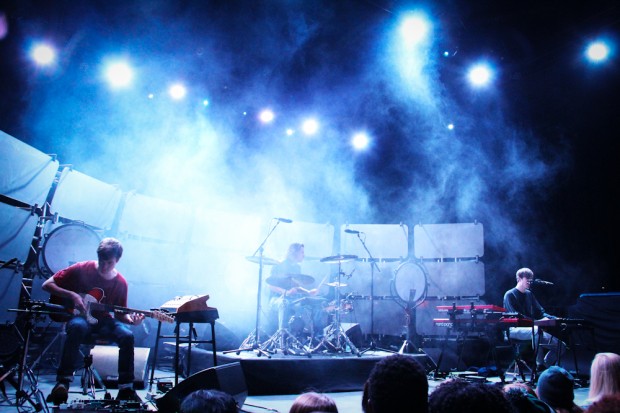 Never one to stick to a particular album live, Blake returned to 2011’s James Blake with “A Wilhelm Scream”, a track that displays Blake’s own transition from his older style of music to new, merging the former concentration on potent beat loops to the latter’s more lyrically heavy style found on Overgrown. He strayed further with a cover of Joni Mitchell’s “A Case of You”, a curveball that threw off everyone in the crowd in the most wonderful way. “Limit to Your Love”, a Feist cover and another of Blake’s most popular tracks, kept everybody ablaze before the heart melting conclusion. Nobody in the audience had any clue of the masterpiece that was to come.

The encore was not just the cherry on top of a perfect evening, it was the whole damn cake. James returned to the stage alone, and, in one of the few dialogues with the audience, said, more or less, “please shut up so I can record the loop here without wooing and yelling and create this with you” (not exactly it, but very close). What proceeded was utter silence as Blake serenaded us with the raw vocals of “Measurements” before layering and looping the song in its entirety in front of our very ears. The passion was palpable, and every person in that venue left in a zombie-like daze that can only spring from hearts completely content.