Interview: Philly bass man Philip D’Agostino on the city, the Schuylkill, and stepping into the spotlight
Artists

Interview: Philly bass man Philip D’Agostino on the city, the Schuylkill, and stepping into the spotlight

If you’ve attended a show in the Philly folk/roots scene over the past 20 years, or bought an album from a folk/roots artist, or listened to them on the radio… chances are, you’ve encountered Philip D’Agostino. The prolific Philadelphia bass man has been playing live for nearly two decades now, and has contributed his talents to a slew of projects in Philadelphia and beyond. You can catch him regularly playing bass with Hezekiah Jones, Chris Kasper, Ben Arnold, and others—and you can hear his work on many a local record. This weekend though, the constant side man will step into the spotlight, as he celebrates the release of his sophomore record, Inlets. We caught up with D’Agostino to hear more about Inlets’ outlets—and how his process is inspired by friends, the city, and sailing down the Schuylkill River.

For D’Agostino, music is more than just a hobby—it’s a full-time job. He makes his living playing gigs, teaching music, and working as a session musician—a set-up he loves due to its warm environment and flexible schedule. “It’s a great gig,” he says with a smile—“but it’s also more that. The people I play with give me the confidence and inspiration to make my own music. My days are filled with beautiful people who cram my head full of creativity.”

The musicians on Inlets are some of the same friends D’Agostino gigs with regularly, including Mark Allen, Ross Bellenoit, Bethany Brooks, Patrick Hughes, and Matt Scarano—and D’Agostino credits the record’s sound to their creativity and skill. “Their rhythmic and harmonic ideas really took the songs up a notch,” he says, calling it “the antithesis of a singer-songwriter record” and more of a “showcase of musicians.”

It was recorded and cut in one day, by Matt Muir at Kawari Sound, a studio D’Agostino says he chose for its relaxed vibe and wide selection of vintage gear. “My last record took a year and a half to make, and featured 25 different musicians,” he says. “So for this one, I didn’t want to fuss over it.” He explains that he didn’t even let musicians change settings between numbers. “I just wanted it to be the six of us playing,” he says.

The record’s cover art was created by D’Agostino’s two-year old son Felix when he was just nine months old, and represents “the freest possible expression someone could make.” “When you’re a baby, you have no conception of art, or anything like that,” he explains. “And that’s what I wanted for the record. The same lack of barriers that he had when he drew it.” 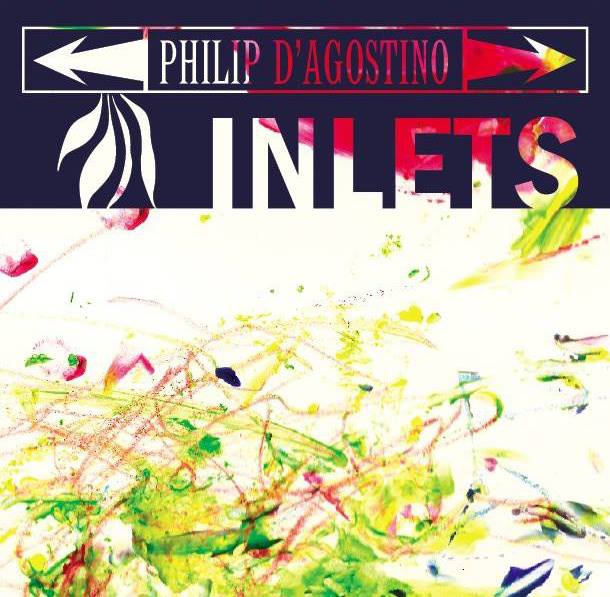 Inlets‘ sounds are funky, jazzy, and tropicalia-inspired, from the zippy “Footballs” to the funky “Thick as Thieves”… to the languid, slow-burning “Forbidden Drive.”

D’Agostino tells me there’s no particular process to his songwriting; rather he’ll just be hit by a melody while walking around the city. “I’ll write in my head and when I get home, or to my car, I’ll sing the melody into my phone,” he says. Other times, inspiration will strike while focused on a banal task, such as driving: “The song ‘Monday Nights’ came to me while driving to the beach in the middle of the night,” he says. “And as soon as I got to the house, I just got out my bass and recorded it. And that was it.”

But D’Agostino’s favorite place to find inspiration is along the Schuylkill River, off River Road, near his home in Roxborough. “Being down there with friends is really great—it’s probably the most inspiring place of my life these past five years,” he says. “So many ideas came from out there; we’d just go down there and sail boats, light a fire, and hang out. It’s a great way to spend an afternoon.”

D’Agostino will celebrate Inlets’ release with a release party this Saturday at the Ardmore Music Hall, alongside Raph Cutrufello of Hezekiah Jones, Brad Hinton, and Daniel Bower (all playing each others’ songs!) and Griz’s Soul Shakedown Party (who they’ll accompany). It will be his first headlining performance since 2010, and he admits he’s nervous…but excited. Then after that, it’s back to side man duties, with songwriting on the side. “I already have another batch of songs I’ve written,” he says with a grin, noting that he’s always ready to move on to the next thing. We’re just happy to be along for the ride.

Philip D’Agostino plays Ardmore Music Hall this Saturday, November 16. The 21+ show begins at 10 p.m. and tickets are $10; more information can be found via the venue’s website.