The Downtown Club: Timeless post-punk catharsis from the heart of Brotherly Love - WXPN 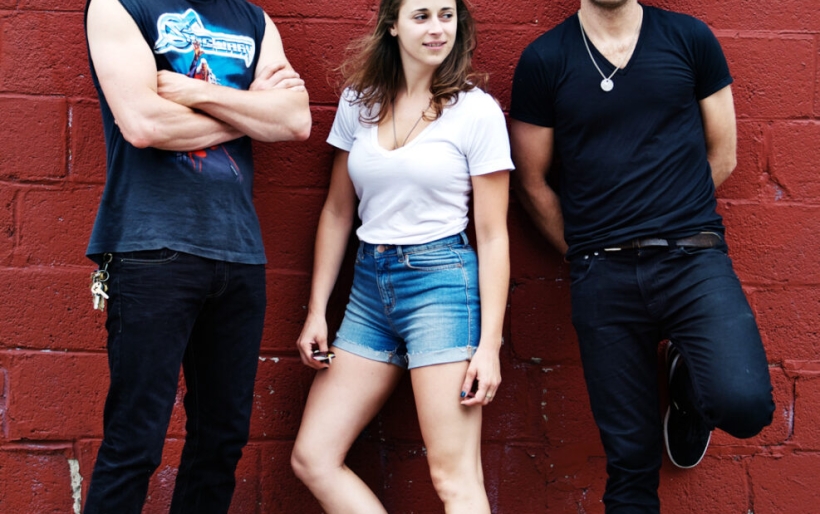 The Downtown Club: Timeless post-punk catharsis from the heart of Brotherly Love

Go to any show with The Downtown Club on the bill, and you might have a few off-the-bat impressions about them.

Maybe you notice their black clothes, straight faces and post-punk aesthetic – a feel that runs deeper than their music and right through the Gang of Four-esque on-stage foot tapping. And then there’s the music – dark and minor-key-heavy, their reverb-drenched vocals and dance-inducing rhythms paint the picture of the transitioning (or transitioned, depending on who you ask) Fishtown they call home. Are they New York exiles, trying to keep the momentum of The Rapture or Interpol alive in another city? Or maybe they’re Temple students, obsessed with the early-80s Golden Age of New Wave and trying to make rock ‘n roll dreams come true? Hell, they even put the word “Club” in their name!

But, spend a few moments in their collective headspace – whether it’s listening to their perfectly executed Key Studio Sessions or chatting up the extremely non-pretentious band members after a show – and you’ll realize just how boneheaded your assumptions were. This trio of late-20s/mid-30s (yeah, they just look 10 years younger) native Philadelphians paint a picture of the changing Fishtown precisely because they’ve been around through all that change.

“I used to come to Fishtown when I was in high school. You came down here to get drugs, get into fights, to fuck up your life. Fishtown was bad,” recounts lead singer/guitarist/keyboardist April Harkanson, a Frankford native. “It’s just crazy, how this neighborhood’s changed so much, and that I’m still living here. It’s been a really interesting thing, watching this city grow.”

“There are very few people we know now that are from here,” adds bassist Travis Regan, who grew up on a block in Northern Liberties that now boasts apartments with $1000+ rents.  “I’m not anything like the kids I remember growing up with. The kids I met locally, playing basketball – God knows where they are now. I can’t imagine them loading in at The Troc.”

We’re sitting in the dimly-lit parlor of April’s house on a Friday evening, sipping tea. There are vinyl sleeves strewn about, but none of their most obvious influences: British post-punk and New Wave, especially Siouxsie and the Banshees (an easy female-fronted-band comparison, but a meaningful one). April and Travis piggy-back off each other’s sentences as comfortably as the closest of siblings. It’s a scene of domestic tranquility that you wouldn’t expect from a band whose music sticks in your mind’s darkest and most uncomfortable corners.  Then again, The Downtown Club truly works to complicate every assumption you have about them.

The band traces its origins to April and Travis’s first meeting while both were working at North Bowl in Northern Liberties. Travis, a prolific DJ who spins at bars throughout the city, knew drummer Dan Welsh from their days at Temple and subsequent periods working for various Philadelphia moving companies (chances are, if you’ve moved in the city within the past decade, one of these guys has handled your stuff). After a bit of time where April and Travis worked with other musicians and sounds, Travis brought Dan into the fold. After playing a few shows under the name “Prints”, the three of them came coalesced as The Downtown Club (named after the historic chic cigar club-turned-wedding venue at 6th and Chestnut) with a show at Silk City in 2011. Since then, the threesome has been building a steady reputation through shows with local bands like Little Big League and Cruiser, showcases like Young Robots’s Philadelphia Maneto, and prestigious opening slots like last month’s for YACHT at Boot & Saddle.

Their musical output may evoke very specific bands from a very specific time period, but their conceptual influences are much more diverse. Both April and Travis declare an unabashed love for hip-hop, with Travis sourcing his own musical exploration to his sample-searching DJ tendencies (“Happiness is a stack of records I don’t know.”). April, raised on big band music and trained at CAPA (she works during the day as a music therapist and a few other music-related human service positions), cites Lauryn Hill and Neil Young as favorites. Dan, the only member to have been in rock bands before this one, has tastes the other two describe as “sludgy” and rooted in bands like The Melvins and The Misfits. All three are charting new-ish territory with The Downtown Club’s current sonic territory, introduced first Travis when a friend put on XTC one night at the now-defunct Tritone Bar.

“I want to move when I listen to that music, and the lyrics are usually very dark,” says April of post-punk’s appeal. “Yeah, they’re very ‘dark magic’,” adds Travis.

“Dark magic” is also a useful descriptive term for The Downtown Club’s tuneful take on this classic genre. Dan’s metronomic and airtight drumming deconstructs four-on-the-floor into high-hat- and tom-heavy syncopation, interspersed with dramatic cymbal crashes throughout. April’s delay-heavy guitar and metallic synth lines create textures of unsettling warmth that fluctuate between shimmering lead lines and heart-stopping chord attacks. Travis’s picked basslines mediate these two poles with an eight-note-heavy consistency and precision that deftly solidifies each song’s rhythmic core. At front and center are April’s acrobatic vocals – capable of alluring airiness and damning howls in the same breath, her voice carries a carefully-wielded power that both cut and bludgeon with a grace that underscores her classical training.

“As a singer, I love using my voice to make sounds. And I love manipulating it, but not in a classical sense,” says April. “I don’t need to sound pretty, or sweet.” Her voice’s centrality is emphasized by the minimalism of the songs’ lyrics, written mainly between her and Travis, which can allow any number of interpretations.

“I’ve never tried to sit down and analyze what they mean. The thing I’ve noticed is that most of our songs are dark, and I feel like the lyrics are just this thing inside of me that maybe I repress. Since I don’t ever express myself through words when I’m upset or sad, maybe I’m letting [these feelings] out through this.”

Those who have followed this band from the beginning, as this writer has since first stumbling onto a 2011 show at Liberty Lands Park, will notice that their sound has shifted very subtly in the past few years. The songs are opening up, there’s more atmosphere and less rigidity. It is a change that the band is exploring more fully in sessions for their upcoming debut full-length.

“I think we’re going in the realm of…the songs don’t have to have a verse, a chorus, or a bridge. We just wrote a song for the record where Travis is playing the same bassline for two minutes.” explains April.

The album is being recorded with Travis’s old moving company friend, Uniform Recording’s Jeff Zeigler (best known for work with clients like The War on Drugs and Kurt Vile, as well as his own Arc in Round). Jeff recorded The Downtown Club’s 2012 self-titled EP as well, and some of those tracks will make their way to the album in reworked forms. The band’s sonic growth, in the hands of the city’s most illustrious indie rock engineer, reflects the sense of artistic legitimacy for which the band consistently strives.

So now, perhaps a different set of assumptions emerige. Maybe The Downtown Club are old Philadelphian souls with old-school tastes and old-school DIY ethics, hooking people in with solid nuanced rock instead of flashy gimmicks. Maybe they’re progressives, exploring their sound in ways other Philadelphia bands might not touch. Maybe they’re the next indie rock sensation, ready to capture the hearts of audiences and critics with their update on a timeless and underutilized sound.

Well, no matter what you think of them, you certainly won’t stop dancing.

The Downtown Club performs this Saturday, November 16th at Johnny Brenda’s with Ape!, Metroplex, and Cloud Minder. The 21+ show begins at 8 p.m., tickets are $10 and available here.