West Philly native Res made it big in 2001 with her debut How I Do and, as with many Philly artists, she has a dedicated following. Since that time, she released the album Black.Girls.Rock!, a mixtape, and toured with Gnarls Barkley and Talib Kweli.

Last month Res released the three-years-in-the-making Refried Mac, a collection of Fleetwood Mac and Stevie Nicks covers on eOne Records – a label that also features Michelle Williams and Bilal among others. She performed Sunday night at World Café Live to an audience of friends, family, and long-time fans – two who came all the way from Las Vegas.

Starting off with selections from the EP, Res played a blistering version of “The Chain,” followed by “Rhiannon“, “Edge of Seventeen” and “Dreams.” It was the last of the covers that got many of the dining crowd on their feet. Res explained that the song is timeless since “players” are still “playing.” The band, which featured Refried producer Tom Spiker, provided an infusion of reggae that not many Fleetwood Mac fans would necessarily expect but the ambiance worked and helped to transition the set from the covers to Res’ back catalog.

The rest of the set was mostly from How I Do, the exception being “God Bless My Soul,” from her project with Kweli, Idle Warship. While in some ways, I found the lack of material from her other releases disappointing, the crowd was ecstatic hearing songs from their youth that were as introspective as the Stevie Nicks-penned songs from earlier in the set.

The highlight of the evening was Res’ performance of her hit “Golden Boys.” Listening to this, I immediately thought of what the song’s writer Santi White (Santigold) was saying – and how not much has changed over time. Performers such as Drake and Robin Thicke have been crticized much these past months for the images they evoke and how they depict women and fame. The lyrics could have been written last week but were actually written almost 15 years ago:

It’s easy to depend on the hits to drive ticket sales and there are many who remember How I Do fondly as an R&B album that went against the grain of the trends of the time. Refried Mac shows that Res is still rebelling against the industry and trying to turn expectations on their heads. She should trust that her fans will stick with her and that moving beyond her comfort zone may fuel the momentum for another great album.

The opener, Natural Selection, is a jazz-tinged group reminiscent of The Brand New Heavies. They did an impressive set of upbeat love songs with awesome guitar and keyboard solos. They not only covered Erykah Badu’s “Tyrone” which is gutsy but singer Alesia Dessau hit it out of the park and made the song her own. Check out photos from the show in the gallery below, and see the setlist and a video after the jump. 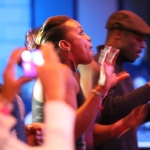