A heavy mechanical door shuts with a reverberant thud as three musicians, arms full of instrument cases, look silently and quizzically at the prison hallways ahead of them.

Another door slowly opens, allowing the group to advance into the next holding area, surrounded by security windows embedded with wire mesh. The second door locks behind them, and there is a pause before the third and final gate opens.

The representatives of Jail Guitar Doors – a national charity launching a local branch in Philadelphia’s Riverside Correctional Facility – step into the main hallway, sign in with a guard, and are shown into the gymnasium. 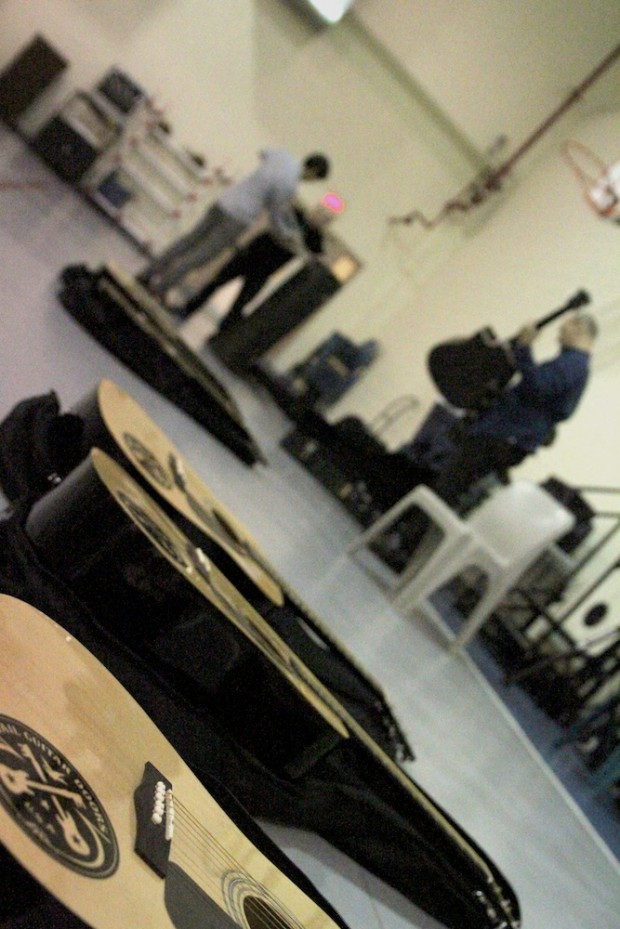 Leading the group is Wayne Kramer, a skinny man with a denim jacket, a closely-buzzed haircut and a big smile. He shows relatively little trace of the unhinged and rowdy guitarist he used to be a lifetime ago in legendary Detroit proto-punk band MC5. Kramer carries his own acoustic guitar in a hard case, plus about three donated ones in soft gig bags. Behind him, Keith Javors of local jazz label Inarhyme Records wheels a Rhodes keyboard, followed by Bob Whitt with his bass and amp. (I bring up the rear carrying three more donated acoustics, since arms are at a premium here.)

Settled in the gymnasium of the women’s wing of Riverside, Kramer notices an issue – a handheld microphone and PA system sit in the corner, but there’s no microphone stand. As a guard runs off to check for one, Kramer turns to his companions.

“You never know what you’re going to get coming in here,” he laughs. He reminisces about his visits to other prisons around the country with the program; sometimes he encounters spaces where he’s performing for inmates by himself with no setup and little guidance. Other times, the prisons are equipped, fully staffed and extremely helpful. Riverside definitely leans towards the latter – but when the guard returns, we learn that there is no mic stand to be had. Kramer decides to wing it as inmates are shown in.

Jail Guitar Doors’ mission is rehabilitation through music. Through donated instruments and volunteer music instructors from the local community, the program teaches prisoners the basics of songwriting and self-expression through music. “You gotta remember, these folks use music for the same reason we do,” Kramer whispers to his companions. “To keep us from blowing our tops.”

He turns and greets his audience – “I’m happy to be here.”

“I’m not,” one inmate deadpans.

“I don’t blame you,” says Kramer, and the group warmly chuckles. The tension is broken, and Kramer then goes on to tell his own backstory of drug dealing, addiction and incarceration, so well known in its day that The Clash wrote a song about him. He then flashes forward to a few years ago, seeing UK folksinger and activist Billy Bragg perform with a sticker on his guitar bearing the words “Jail Guitar Doors.”

“Hey, that song’s about me,” Kramer recalls saying to Bragg, who responded that it was actually a sticker for his England-based charity. This was 2009, and not too long after, Jail Guitar Doors USA was born.

The American prison system is “a disgrace,” Kramer told the room, and he said he frequently lobbies for prison reform in Washington D.C. But today wasn’t about that – it was about what can be done in the meantime. The prison system isn’t the only thing that needs to change, he said. The inmates do.

Kramer is a candid and engaging speaker; he bounced between relating his own experience anecdotally, and speaking more broadly about the endgame of rehabilitating. Of changing.

“If I didn’t change who I was, all the harm I’d done, I’d go right back out and do it again,” Kramer said.

Which is where the guitars came in. Six acoustic Fenders, lined up in a row on the floor at the front of the room and emblazoned with a Jail Guitar Doors sticker, were being given to Riverside – a donation, but also a challenge. “They represent the first step in your rehabilitation, your first step back into the world,” Kramer said.

“I want you to write a song, ” he said. “Tell your story. Write a song to yourself. Tell how you got here. Write a song for your family. They care about you, they believe in you. They know you want to do better.” 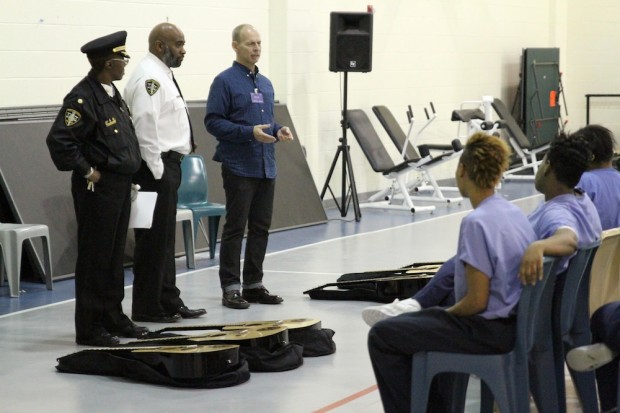 Accepting the instruments on behalf of Riverside was Warden Terrence Clark, and Kramer explained the program to him. A grant from the Annenberg Foundation would fund an initial run of songwriting workshops once a week and lasting two months, facilitated by Javors, Whitt and other volunteer music teachers. Clark was excited about the prospect.

“I guarantee you, when you return, you’ll see something special,” he said, gesturing to the room. “When these ladies work together, and you give them something creative to do, you really see the best of them. You’re going to be surprised.”

Kramer nodded in agreement, and related it to the results of the program he’s seen in his home state of California. “Our prisons have a significant gang problem,” Kramer said. “But when you get the inmates in the music room, the idea of gangs go away. Race, class, that all goes away. When you play music with someone, you get to talking to them, you start to see similarities between yourselves.”

After some handshakes and applause, Kramer picked up his guitar and gestured to his fellow musicians. First Javors and Whitt led two upbeat instrumentals the crowd recognized: Bruce Hornsby’s “The Way It Is” – which had the room clapping along to the beat – and a gospel song, “Down By The River Side” – which drummed up a singalong in addition to the claps.

Kramer then stepped up, wearing his acoustic, and played a powerful solo rendition of “I Shall Be Released.” Between his earnest delivery, the setting and the looks on the inmates’ faces, this sent chills down my back. The crowd applauded as the song ended, and Kramer paused to introduce the next one.

“People think that any time you talk about music in prison, you’re talking about Johnny Cash or Merle Haggard,” he said. “But the song that sums its up for me is by Bob Marley.”

“Redemption Song” followed, and again, the metaphor was not missed – the crowd sang along enthusiastically. Kramer closed with a fervent take on the program’s adopted theme song, “Jail Guitar Doors,” putting a faux cockney accent on the pronunciation – “Let me tell you bout Waaayne and his deals of cocaaaine.”

The crowd cheered and the program was over. They began to file out and back to their cell blocks. In a parting gesture, Kramer reminded the group of his challenge: “Write that song. It will change your life.”

In the spirit of #GivingTuesday – which takes place Tuesday, December 3rd – WXPN is spotlighting the good work of various non-profits throughout the community. We have a day for giving thanks, days for giving gifts, and now we have a day for giving back! Learn more about how you can support Jail Guitar Doors here, and see a roundup of other local nonprofits here.