Digging up the past with Philly punk vets Ex Friends
Artists

Digging up the past with Philly punk vets Ex Friends

Historical context, and the role it plays as we view our own present, is important to Joel Tannenbaum. He teaches history at the Community College of Philadelphia – why wouldn’t it be? His fixation on the past and its relationship to the current state of things is evident right from the first few seconds of “Dirty Ben Franklin,” the opening track to Rules for Making up Words (Paper + Plastick), the first record from Tannenbaum’s Ex Friends, when he growls:

“If you listen closely, you’ll hear the sound / Of ghostly feet walking on the old hunting grounds / Then you’ll hear voices, troubled and vexed / With vague premonitions of what’s coming next”

“I’m really genuinely proud of that song,” Tannenbaum says. “I feel like it let me do a lot of different things at once that I think are important in songs. It’s about history, which is very important to me obviously. It’s about this city in a very particular way.” He stops for a second, before finishing his thought. “And it’s an anthem.”

There’s a distinct air of weariness and exhaustion that runs through Rules for Making up Words, but we’ll get to that in a second. Right now, a little bit of Ex Friends history.

The band was conceived backstage at 2011’s Riot Fest, where Tannenbaum was performing with a  Plow United, the popular power trio he played bass in during the mid-90s. The band played its first show in a dozen years for the festival, and after the set, Tannenbaum was talking to his friend, artist and drummer JP Flexner. He realized that he needed to start playing music again. “I told [Flexner] that I had all these other songs and I wanted to start another band, because Plow United can’t be more than a part-time thing at this point, with everyone spread across the country,” he says. “We had our first rehearsal less than a month after that.”

After a handful of smaller releases, Tannenbaum, Flexner and the other two Ex Friends (bassist Audrey Crash and guitarist Jayme Guokas) filed up to Bucks County to record Rules for Making up Words with producer Vince Ratti (Tigers Jaw, The Wonder Years). “It’s a small space and it’s a little cluttered,” Tannenbaum says. “You have to walk through his parents’ living room to use the bathroom. We went for three really intense, 10-hour days in the middle of the winter and just blew out the tracks.” 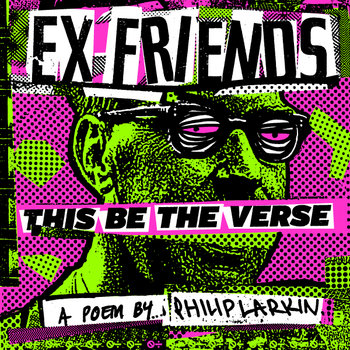 Ex Friends represents a new place for Tannenbaum in terms of songwriting habits. “The songs all kind of start from the same place, before a certain point where I have to figure out if it’s a Plow song or an Ex Friends song,” he says of the difference between writing for the two bands. “The rest of the band has a veto power. When I’m writing Ex Friends songs I feel like I’m piecing together this wall of songs that will eventually fit together. JP and I conceived this band from the beginning as a venue for my songs and his art.” Flexner designs the covers for each Ex Friends release, maintaining a cut-n-paste, classically punk visual style that he has been developing since 2011.

But back to the record. As the small specks of grey in his dark hair might indicate, Tannenbaum has seen a lot. Rules for Making up Words, according to him, is a snapshot of all that was ruminating in his head throughout 2012. “The neighborhood we practiced in, in East Kensington, kept having all these abandoned warehouse fires. It was just a regular feature of life in that neighborhood,” he says. It’s a little apocalyptic, a little funny and imagery of collapse and disillusionment litter the record’s 14 songs, reminiscent of the social commentary (aided by Tannenbaum’s weathered vocal delivery) of Jesse Michaels’ work in bands like Operation Ivy and Classics of Love.

At one moment toward the end of our interview, Tannenbaum and I start talking about economically depressed small towns in Anywhere, Western Pennsylvania. He had toured out that way with Plow United in the past, and the quiet anger that bubbles in working class steel towns (or anywhere, really) is something he addresses on the record. On “The Middle of Nowhere,” his lyrics succinctly sting: “Where the boredom chews up everything / That everybody might’ve been … In the middle of fucking nowhere / time stands still.”

While the physical release of Rules for Making up Friends is still a short while away, the band has already finished a follow-up EP, titled Animal Needs. And shortly after tonight’s show at Creep Records, Ex Friends are embarking on a short tour down to Florida and back in January. And a European tour might be in the cards soon. As far as Tannenbaum, college educator and seasoned punk musician can see, Ex Friends are here to stay. “I haven’t played live music at all for a decade and all of a sudden I found myself standing on a stage in front of 5,000 people. It was very strange,” he says, recalling that day at Riot Fest a few years ago.

“I’m 38 years old. In terms of how much time I have and what I choose to spend it on, this is pretty awesome.”