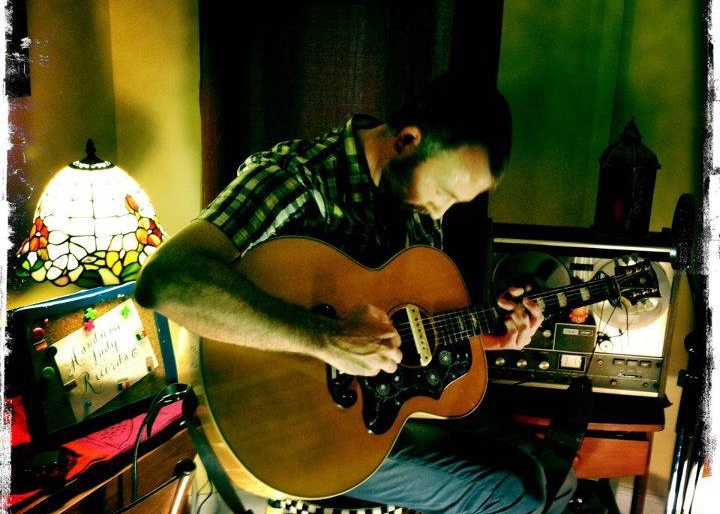 There’s a chuckle at the other end of the line when I ask Heyward Howkins about his iPhone demos – the raw, one-take early recordings of songs that went on to form his new album, Be Frank, Furness.

“Yeah, some of my friends asked me ‘Why are you doing that? Who’s going to listen to your record?,” he says. There’s a pause, and the auditory equivalent of a shrug. “Even if its a little rough, I like to get it down – I like to capture those moments where it’s fresh. Where it’s like like ‘this is awesome, I need to share it.'”

Doing this definitely served a purpose, or purposes – building momentum for the release of Be Frank, Furness, getting listeners familiar with the new songs in an early stage (something he also did in a few video sessions). And it also created companion versions of his new songs that exist in a different space and harbor different feelings than the finished versions – they’re the same, but they’re their own unique artifacts. Heyward sees it more simply.

It took him a bit of time to reach this comfort zone as a solo artist. In the late 90s, he was the guitarist for The Trouble With Sweeney, with noted local musican, writer and editor Joey Sweeney. Before that, Howkins recalls, the only other he played in “was some Cure and Smiths cover band in high school. We did some originals, I wasn’t the singer but I wrote the songs.”

He remembers his time in The Trouble fondly, but when that group disbanded in 2005, he didn’t immediately think to pursue music. He got a regular 9 to 5 in Philly, he and his wife started a family. He would play guitar at home sometimes, and write songs when ideas struck him, but nothing super serious until he was between jobs in 2009 and decided to use his free time making demos. One was the song that became the title track of his first record, “The Hale and Hearty.”

“I had been working on that song for a few years,” he remembers.

The demos he initially kept to himself, sharing it only with his old band mate Sweeney – who told him he should, no question, do more.

“I had zero confidence, I didn’t even play it for my wife or anything,” Howkins says. “Joey was a big supporter, he was really into first demos I did, which gave me motivation to do more. He was really encouraging.”

I asked Sweeney what it was that attracts him to Howkins’ songwriting. He describes what he heard as “a kind of blithe, bitterly-won elegance,” a sound and feeling that’s unique to his friend.

“The only other people out there working in this color palate today, I feel, are like Rufus Wainwright or Dan Bejar,” Sweeney writes. “Guys who are doing deeply literary things in song. But it’s never precious or clever – there’s a depth of feeling and, like, lived-in-ness to it that just makes it impossible to turn away from.”

But Howkins wasn’t quite at the point of realizing it himself yet. It took a few more steps. Singing with The Silver Ages, a men’s close harmony a cappella ensemble made up of Philly scene regulars, helped him literally find his voice – how to sing loud and sing confidently. And working with Chet Del Campo in his Fishtown studio brought the ideas he had in his head about arrangement into focus. What was originally intended to be a two or three song demo became his masterful debut, The Hale and Hearty.

“I guess whatever was holding me back to some extent went way,” Howkins says. “It started to roll from there. I would labor over songs a lot less. I was a very green songwriter at first, and I guess it came to it a little later in life.”

Which brings us to today.

Howkins has his second full-length out this week via BITBY Records, and celebrates tonight with a performance at Johnny Brenda’s. As we noted in our review earlier this week, the record shows significant growth in terms of structure and arrangement. Where Hale is an elegant work that connects best in the uncluttered quiet of early weekend mornings, Be Frank, Furness is driving and dynamic, hitting rock band highs and retreating into hushed songwriterly corners.

He attributes the growth, in part, to his band – Meggie Morganelli on keyboards and vocals,
Erik Schmidt on drums, Josh Newman on bass, with additional work on record from drummer Charlie Hall (of Silver Ages and War on Drugs) and horn arranger Vince Tampio (of York Street Hustle). Making something more varied in tempo is the natural thing to do when working with other musicians.

“I’m really proud of that first record,” Howkins says. “I couldn’t be more happy with how it was received. But is it super fun to listen to? Maybe not.”

Not entirely true, but to Howkins’ point, the traditional four-piece band template showed him possibilities for expanding his songs, both from the first record, and the new ones he was working on (and iPhoning up to his Soundcloud page). The music in its raw form could very well be the finished thing – and with some songs, such as “Flimsy Stock,” it’s pretty close to it. It could also be a skeleton that could be built upon.

And, Howkins jokes, “When you have a drummer, the drummer loves to rock out. You gotta give the drummer what he wants sometimes. Not everything needs to be super slowcore.”

Which is far from a universal sentiment.

“It’s funny,” Sweeney writes. “For like two years, I have been saying, ‘Dude, why are you sweating having a band and shit? You need to make your Pink Moon!’ Boy was I wrong, though: Not that I don’t think he’s got a Pink Moon in him – he does, have you heard the phone demos? – dude also just made his very own Fold Your Hands, Child, You Walk Like A Peasant. Goddamn. There’s too much love.”

Thinking about those Nick Drake / Belle and Sebastian comparisons – and the very literary songwriting Sweeney described earlier – leads us to consider Howkins’ own unique voice as a singer and songwriter. His mellifluous, slightly falsetto delivery, his clever choice of words and juxtapositions, and subjects. Like the aforementioned “Flimsy Stock” – the title alone recalls flickering old strips of film, or brittle reams of paper, and he’s using it to talk about two companions.

I ask, and Howkins – a self-described “huge Pavement fan” – recalls hearing Stephen Malkmus talk about the importance of word choice.

“I think there’s a lot of validity to that,” Howkins says. “I really think the sound, and the way you pronounce or inflect words, can make the song more unique and not sounding like every other verse-chorus-bridge song.”

As for the subject matter – naming his album after a 19th Century architect and referencing famous Philadelphia landmarks in its songs – he says there’s no conceit about it, it’s simply to make the song more interesting.

“It’s not a put on,” Howkins says. “I’m not trying to be more well well-read than the next person. I’m definitely not! But I have good ears and I remember interesting words, and when I see something and think ‘that sounds cool,’ it can be a seedling for jumping-off into a song idea.”

He says the idea for “Spanish Moss” from the first album came from a vacation with his family to Savannah, Georgia, where he saw Spanish moss hanging from trees. He spun it into a song about the parallels between his present-day home in Philadelphia, and his family’s ancestral roots in the south. But it’s very cloaked in metaphor. So how personal is Heyward Howkins’ songwriting in the end?

“I may be saying ‘you this’ and ‘you that,’ but it probably means me,” he says. “Those are the powers of using interesting language. You can kind of tell a story, and have somebody learn something about you in the process, but they can also interpret it in a way where it’s meaningful to them. That way we both benefit.”

Be Frank, Furness is the featured album in this week’s edition of Unlocked. Download “Praline Country” in Monday’s post, read Tuesday’s album review, see songs in progress in Wednesday’s post and check back tomorrow for a recap of Howkins’ album release show tonight at Johnny Brenda’s.