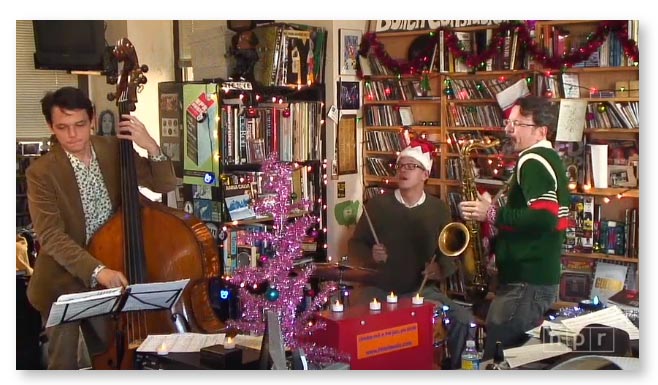 Have Yourself A Jazzy Christmas: From chorals to jams, a rundown of swinging holiday events this month

Mixing Christmas music and jazz is often about as welcome as spoiled eggnog, but Philly jazz fans must have been especially good this year. The next few weeks promise several performances which would be welcome at any time of year, many of them featuring local artists with new CDs that serve to counter the ever-present Xmas schmaltz.

Mary Ellen Desmond
For the last ten years Desmond, Philly’s consummate jazz vocalist, has presided over a holiday concert benefiting the St. Luke’s Hospitality Center, an outreach ministry of the Church of St. Luke and the Epiphany which provides services to locals suffering from HIV/AIDS. She celebrates that anniversary with the release of Comfort & Joy, a new CD compiling fifteen of the songs that have been included in the concerts over the years, featuring a band of local all-stars: pianist Tom Lawton, bassist Lee Smith, drummer Dan Monaghan, and tenor great Larry McKenna. That band will reconvene for the tenth anniversary Comfort & Joy concert on Sunday at St. Luke’s and for a CD release show next Friday at Chris’. The two shows promise to offer setlists as eclectic as the CD. Desmond sings (and swings) several of the expected Christmas favorites – “Have Yourself a Merry Little Christmas,” “Winter Wonderland,” “White Christmas” – as well as several tunes that align with the spirit of the season, including Joni Mitchell’s “River” and Abbey Lincoln’s “Throw It Away.” The disc ends with the optimism of “You Must Believe in Spring,” a faith that can be hard to keep given the current weather conditions.

Matt Wilson’s Christmas Tree-O
Drummer Matt Wilson is known for bringing a sense of humor and playfulness to every situation in which he performs – which is vast, as his irreverence in no way undercuts his status as one of the most inventive and creative voices on the kit. But those qualities also make him the ideal host for a holiday shindig, which he’s done for the past several years with his Christmas Tree-O. The group, which also includes Paul Sikivie on bass and Jeff Lederer on reeds, attacks Xmas tunes with the gleeful enthusiasm of kids tearing into a pile of brightly wrapped gifts. The trio makes its annual visit at the Philadelphia Museum of Art’s Art After 5 next Friday, Dec. 20.

George Burton’s Christmas Yule Log
Chris’ Jazz Café has long served as a home base for native Philadelphian George Burton, so it’s only fitting that he chose to celebrate Christmas there in 2012. As so often happens at this time of year, the occasion quickly became a tradition, so Burton is returning for his second “Christmas Yule Log” performance next Saturday, Dec. 21, as well as expanding it to his adopted home of New York the week before. Burton’s piano trio is paired with a string trio led by local violin virtuoso Diane Monroe, with vocalist Nancy Harms singing a blend of holiday classics and lesser-known holiday fare. Burton is out to create a family-friendly, nostalgic feeling with these performances, so being his home town gives Philly the edge.

The All-Star Jazz Trio
For those who don’t celebrate Christmas, who aren’t indulging in a home-cooked family meal, or who simply want to replicate the famous duck dinner from A Christmas Story with a slightly hipper soundtrack, Philly’s All-Star Jazz Trio has the answer. The long-standing trio – pianist Andy Kahn, drummer Bruce Klauber, and bassist Bruce Kaminsky – will play a Christmas day set at the Rittenhouse Square Chinese and Pan-Asian restaurant Square on Square. The show continues their regular Wednesday night gig at the restaurant, which the trio places in the tradition of jazz-meets-Chinese food represented by legendary pianist Lennie Tristano’s regular shows at NYC’s Confucius Room starting in 1955. The series continues the next week as well, for those still feeling the aftereffects of New Year’s Eve to the extent that they don’t want to cook, but not enough that a swinging trio might feel like a jackhammer to the skull.