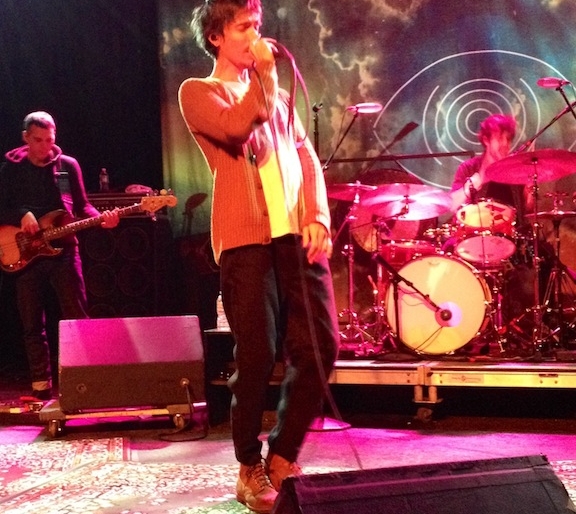 Painting, drawing, writing, singing—you name it, Brandon Boyd does it. Add “making shimmery psychedelic pop” to the bowl of talent, which by now you’d think would overflow but it doesn’t: it just fits. But Boyd isn’t really a pop artist. He’s a rock musician, best known as the frontman of Incubus, who experiments without losing himself. However, we can still lose ourselves in Boyd’s new grooves, like many fans did Wednesday night at the TLA.

Boyd kicked off the night with the title track from The Wild Trapeze, his 2010 solo effort , then the quirky power ballad album opener “Jet Black Crow” from his 2013 collaborative project with rock producer Brendan O’Brien, Sons of the Sea. Drawing from both records, the night found Boyd juxtaposing the raw desert cuts from The Wild Trapeze (i.e., “Dance While the Devil Sleeps” and album standout “Runaway Train”) with the grand and melodic, Beatles-inspired pop of Sons of the Sea (i.e., “Untethered” and single “Come Together”). The transition from acoustic self-esteem booster “Courage and Control” into vocal-driven “Avalanche” was seamless with the latter propelling Boyd’s voice to new heights.

These quieter moments give him more space to show off the incredible set of pipes that can be overlooked amidst intricate guitar riffs that often become the centerpieces of Incubus songs (with the exception of their last studio offering, the dark and brooding “If Not Now, When?”). Boyd and his band finished up with “Lady Black”, a ballad which called for a softer vocal delivery as he pines over unrequited love.

Returning to the most familiar, comfortable place for the rocker, things get loud for the encore. The chorus of “Great Escape” grips you by the collar and begs you to listen as Boyd sings: “say what you want of me/unkind and amplified/ cry or bat those eyes, you’ll never change my mind” over a loud guitar. Clearly, he’s resolute about one thing: he’ll do what he wants whether it’s making alt-rock with Incubus, crafting pop music with Brendan O’Brien, or wearing his burnt orange grandpa cardigan.