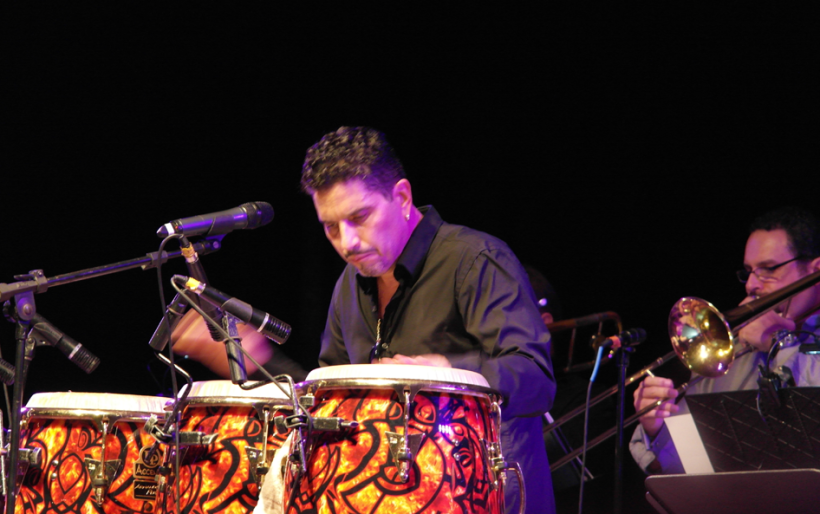 Coming Together Through Mambo: Bala Cynwyd’s Pablo Batista serves up a Valentine’s feast at Painted Bride

If you’re looking for a way to impress your Valentine with more than a box of chocolates and a dozen roses, Pablo Batista promises that an evening of dancing and live salsa music is the way to go. The Grammy-winning percussionist will lead his ten-piece Mambo Syndicate band at the Painted Bride on Friday night for a Valentine’s Day salsa party. (Not to worry if you don’t know the steps – the performance will be preceded by a free salsa lesson with Maestro Flaco.)

“Latin music is very sexy and a lot of fun,” Batista says. “It will be a fun night out for lovers and dancers.”

Batista certainly knows how to create the right environment for a hot and lively night of Latin dance. Born and raised in Bethlehem, PA, he frequently traveled to New York City to catch the Fania All-Stars at the Cheetah Lounge and see all the greats of Latin music. Based in Bala Cynwyd, he’s long aimed to conjure that same atmosphere on a regular basis in Philadelphia. “It’s difficult because there’s not a lot of venues,” he admits. “There are Latin dance parties but there’s usually a DJ, and there’s a different vibe when there’s a live band. I’m always trying to recreate the vibe that occurred in a hotspot like the Palladium Ballroom in New York City, to expose people to the dance and get people pumped up.”

Of course, it’s also difficult to establish a steady salsa night when you’re as busy as Batista. He’s spent the last thirteen years recording and touring with Alicia Keys and recently went on the road with gospel superstar Kirk Franklin for a year and a half. He’s also an in-demand studio musician and educator. “Growing up in the United States, I love all these different styles of music,” he says. “I love funk, R&B, jazz, Latin, classical, rock – at heart I’m really a rocker. All these different influences have enabled me to continue doing what I do.”

For several years in the late 1990s, Batista was a member of Cesar and the Latin Playboys, which hosted a weekly Thursday-night salsa night at the now-defunct Five Spot before the tragic hit-and-run death of bandleader Julio Cesar Marrero. Later, Batista ran “Salsa Meets Jazz,” a series at the Clef Club of Jazz and Performing Arts modeled on the seminal series of the same name that ran at New York’s Village Gate.

Batista founded the Mambo Syndicate three years ago in hopes of reviving that feel, beginning with a less-than-ideal Wednesday gig at Milkboy. “We select some of the best stuff from a lot of artists,” Batista says. “Celia Cruz, Tito Puente, Johnny Pacheco. It’s a slamming little band. Everybody in the band has been playing this music all their lives.”

That’s certainly the case for Batista. His father moved to Pennsylvania from Puerto Rico in 1954 to find work at the Bethlehem Steel plant. The percussionist’s mother had made the same migration to find work, and the couple met in Bethlehem, traveling back to Puerto Rico to get married. The large Puerto Rican and Hispanic community that surrounded the steel plant exposed Batista to Latin music from an early age. “They brought their music and traditions with them,” he recalls. “And New York was very close, so that influence was perpetuated in Bethlehem. I started getting into real heavy stuff and fell in love with the Latin music.”

At the age of nine, he began studying hand drums with Miguel Candia, a master percussionist who worked alongside his father at Bethlehem Steel. In 1981 Batista moved to Philly to attend Temple University, and shortly after graduating was enlisted to tour with soul-jazz great Grover Washington Jr. He maintained that gig until the saxophonist’s death in 1999.

“Grover was a role model and a mentor for me,” Batista says. “I was so young – I was only 21 when I started working with him, and he was already a multi-Grammy Award winner – so I really looked up to him. He taught me a lot about how to be a good bandleader, how to be a good person, how to be a good husband, through his actions and how concerned and caring a person he was. It really molded my development.”

Working with Washington opened doors for Batista in both the jazz and soul worlds. He toured with Jeffrey Osborne from 1988 to 1991 and worked with Phyllis Hyman, Teddy Pendergrass and Dianne Reeves. He also played on smooth jazz guitarist Norman Brown’s 2003 Grammy-winning Just Chillin’ album.

At the same time, he continued to delve deeply into salsa, working with percussionist Manny Oquendo and his ensemble Conjunta Libre as well as pianist Eddie Palmieri. In 1991 Batista received a grant from the Pennsylvania Council of the Arts to take his first trip to Cuba to study folkloric music, a journey he’s made several more times in the intervening years. “I began studying at the age of nine,” Batista says, “and to this day I’m stull studying.”

Batista has been working with Alicia Keys for most of her career, joining her in 2001 and continuing to record and tour with the R&B singer/pianist. “My exposure to the world took off when I joined her band,” Batista says. “We travel worldwide – Africa, Australia, Japan, China, the Philippines, Spain, France. Being diverse and being global are the perspectives that I learned being with Alicia.”

In addition to leading the Mambo Syndicate, Batista is currently an artist in residence at the Kimmel Center, where he’s composing a newly-commissioned piece combining Yoruban Bata rhythms, Afro-Cuban rhythms, and jazz that will be premiered in June. It’s a larger-scale undertaking, but still traces back to the essence of all the music that Batista makes.

“The concept is always about dancing,” he says. “I want to play the style of music that I grew up with. It’s a challenging style of music to play, which is why I love it. But it also brings people together.”

Pablo Batista’s Mambo Syndicate performs at The Painted Bride Art Center on Friday, February 14th, at 7 p.m. Tickets to the concert are $20 in advance, $25 at the door, more information can be found here.