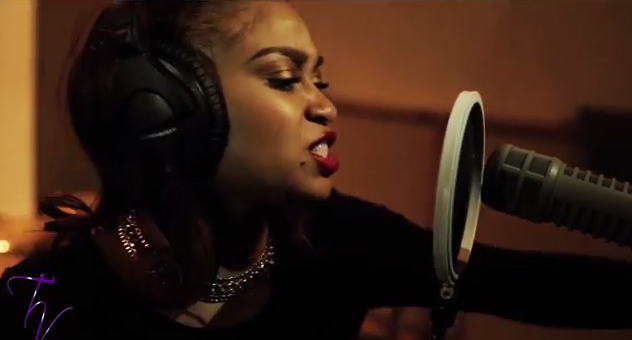 Philly is buried under a foot of snow today, just about everything around us is closed, shows are getting canceled left and right – including the awesome NoLibs Winter Music Festival lineup with Cee Knowledge at The Fire – and we’re using the spare time to dig through as much new music as we can.

This video hit our radar a little bit earlier, thanks to a tweet from rapper / producer Rookie McFly (aka Reek), and it’s a great place to start. Tiani Victoria is an emerging Philly rapper with a razor-sharp delivery and a fierce flow that would melt icy sidewalks as easily as melting faces. We previously heard her on a Halloween track with Reek, and this instudio performance video of “Million Dollar Flow” is the first single from the Young Bob / Headshot Records mixtape Ladies First Vol. 2; it was directed by videographer Doe Boy and produced by Reek.

(Read More – Get to know Philly producer / MC Reek, listen to his Halloween track with Reef the Lost Cauze, Freeway and Tiani Victoria)

It’s a quick clip, but sets an incredible tone – Victoria’s confidence is unwavering, her lyrics are clever and she handily establishes herself as a powerful new voice on the Philly hip-hop scene. Check it out below, and keep an ear out for Victoria’s Nothing Gonna Stop Me EP coming out in March.