Unlocked: Hanging out at home with Modern Baseball - WXPN

Unlocked: Hanging out at home with Modern Baseball
Artists

Unlocked: Hanging out at home with Modern Baseball

Jake Ewald is a big fan of New Girl.

In fact, when he asks me what I think about the show, the Modern Baseball guitarist and co-vocalist lets out a long, resounding “Yyyeah” and pumps his fist when I safely tell him I think it’s a pretty cool program. From across their West Philly kitchen, cherubic Brendan Lukens, Modern Baseball’s other guitarist and co-vocalist, folds his arms and shakes his head knowingly.

“I’m coming around to it as of yesterday,” Lukens sighs. “Jake just keeps talking about it so I sat down the other day and started watching it and thought, ‘this is fucking stupid.’ I’m still not sold though. It’ll come on and I won’t go ‘ugh’ anymore, you know?” Drummer Sean Huber just laughs to himself as he digs through the refrigerator.

This appears to be the general tone over at Modern Baseball HQ, a house not too far north of Drexel University’s campus, in the week leading up to the release of Your Gonna Miss It All, the young, spritely, punkish group’s second full-length album. The pressure may be on, but these boys – Lukens, Ewald, Huber and bassist Ian Farmer, who had a scheduling conflict and couldn’t make the interview – are keeping things casual. Which is an impressive notion, considering how much is exactly on the band’s collective plate in the coming weeks and months. 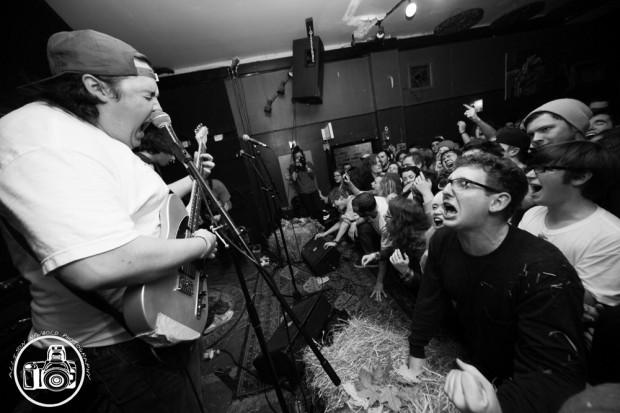 The day after this interview is over, the band will be spending the rest of the week running around Philadelphia to shoot a video for “Your Graduation,” You’re Gonna Miss It All’s acid-spitting lead single, in an upwards of 10 locations, culminating in a performance scene at FDR Skate Park. “We’re shooting in all these different spots because the concept [of the video] is basically me getting broken up with over and over again,” Lukens chuckles. On March 5th, they’ll be heading out on a month-long national tour supporting local pop-punk heavyweights The Wonder Years. A couple weeks after that ends, they’ll be touring Europe for the first time with Real Friends and You Blew It!

“We’re on break until June,” Lukens explains. Aside from Huber, who graduated from Drexel recently, he means the other three Modern Baseballers have taken some time off from school to make all of this happen. (Lukens will return to class at Chestnut Hill College in the fall while Ewald and Farmer will start their next terms at Drexel in late June).

College appears to be the setting for where all things Modern Baseball-related began taking off. “Brendan and I started playing together in high school,” Ewald says. “He went to college, I was still in high school, and we kept playing. But when we were both off at college, we started saying to ourselves, ‘Let’s kind of make this into a real thing.’”

The pair would play assorted open mic nights with a short acoustic EP under their belts before approaching Huber and Farmer to fill out the lineup. Progress was fast tracked from there on, with the band releasing a cult classic with Sports, getting picked up by Run For Cover Records and touring the country this past summer. With so many irons in their proverbial fire, the quickly announced You’re Gonna Miss It All came as a surprise to everyone paying attention.

“We actually started writing this record before Sports even came out,” says Lukens.

“Sports was also a collection of songs we had before deciding to even make in album,” adds Ewald. Lukens chuckles.

“People always talk about how cohesive that record is but honestly, that’s just stupid bollocks. We had maybe 20 songs each and just narrowed it all down just to have something to put out.”

Which makes sense, given that record’s structure. You’re Gonna Miss It All, in contrast, was designed as an organized album – in every sense of that word – from the beginning.

“When we started talking about this record, we seriously cut it down. We weren’t bringing as many songs to the table. So most of what we wrote ended up appearing here,” Lukens says. The end result is an emotionally resonant portrait of being young and feeling human in the 2010’s, all rambunctious, awkward energy and the vague conclusion that not having things figured out is just part of growing up.

(It’s important to note here that, if their songwriting hasn’t conveyed this message already, Lukens and Ewald don’t carry any of the rock musician posturing baggage that many other young bands who have found success very quickly might. Instead, they and Huber are the kind of guys who hug the reporter as he leaves their house.)

“It’s fully intentional,” Ewald and Lukens say, almost in unison, when the subject of their direct, almost microcosmic lyric-writing comes up. Like we mentioned in our album review of You’re Gonna Miss It All earlier this week, one of Modern Baseball’s biggest strengths lies in Ewald and Lukens’ storytelling. A standard poetic breakup song is sad and pleasant to hear, but a Modern Baseball breakup song is nearly cringe-inducing in its painstaking attention to detail.

“When we started this band, we decided that we’re just going to say what we need to say,” says Lukens. He and Ewald cite bands like Say Anything and Motion City Soundtrack as formative to their writing process.

“It’s like, ‘I’m compulsively cleaning my kitchen. I’m checking my tires. I’m so confused about my life and I’m throwing up everywhere because I’m too drunk.’ That’s pretty cool. If you’re sharing all that shit with me, that means that we have a trusting relationship even though I don’t even know you,” says Ewald.

When explaining how they apply this somewhat stream of consciousness writing style to their own lyrics and perhaps maybe why Modern Baseball has struck a chord with so many in such a short amount of time, Lukens shrugs off a laugh, playing with a water bottle his parents bought for him for their upcoming tour.

“It turns out that a lot of people just happen to be 20-something.”

You’re Gonna Miss It All is the featured album in this week’s edition of Unlocked. Download the song “Broken Cash Machine” in Monday’s post, read Tuesday’s album review, watch a video session of “It’s Cold Out Here” in yesterday’s post, and check back for more tomorrow.