Anyone in search of evidence that Justin Timberlake has far surpassed his boy band roots needed look no further than last night’s ecstatic performance at the Wells Fargo Center.

Bringing the tail end of his 20/20 Experience Tour back to the venue that launched it in November, the singer / dancer / style icon / born entertainer dazzled a capacity crowd with a nearly two and a half hour set of theatrical proportions. The show was rich in production value: eye-grabbing projections on a mammoth acoustical shell, a backing band lined up behind sharp “JT” bandstands, a nimble crew of dancers, a catwalk that moved from one side of the venue to the other on a hydraulic lift. But the impressively-crafted setlist was the centerpiece – pop jam after rapid-fire pop jam. Even when it seemed to relent, during the cluster of ballads at the top of the show’s third act, it nevertheless felt like boom, there’s a cover of Michael Jackson’s “Human Nature” that reels everybody back in. 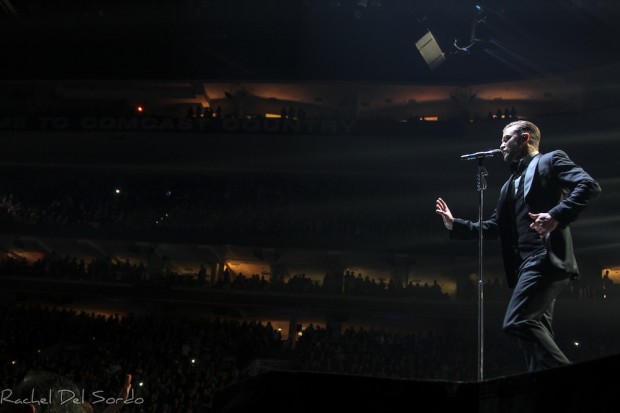 Timberlake released his third solo record – from which the tour borrows its name – almost a year ago, and it made clear his desire to break the pop music mold. If 2002’s Justified was the performer signaling that he could do it alone outside of his formative N*Sync, and 2006’s Future Love/Sex Sounds was his asserting of a nightclub-fuled dance aesthetic to break from his bubblegum past, 20/20 showed that Timberlake wasn’t just some chump with an entourage and a record deal, he was a musician with expansive songs and unconventional sonic-textural ideas, a pop player with a bona fide artistic vision. It’s a point hammered perhaps a bit too hard in the album and tour’s heavy use of Phoropter-related imagery, but still, it’s the songs that do it.

Opening number “Pusher Love Girl” stretched out over ten minutes, Timberlake rising to the stage backed by silhouettes of a string section. It wasn’t totally clear whether the orchestra was real or just projected, but the 15 backing players that rose to the stage with him (trombone, tuba, trumpet, guitar, keys, etc.) were very much real, and totally sharp players to boot. 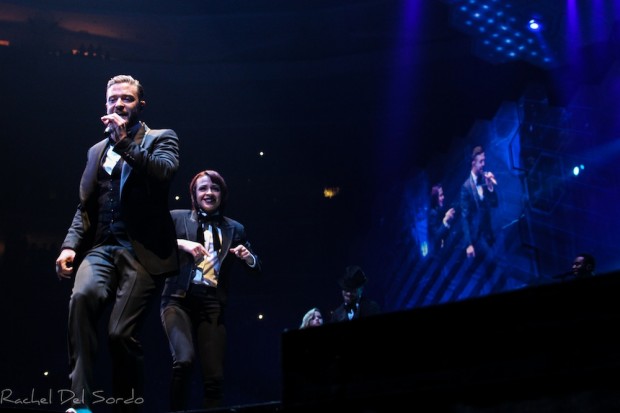 As the song played out, Timberlake danced to the front and worked the crowd beneath, then rushed up to either end of the catwalk, greeting fans in the lower-level seats as elaborate choreography with six backup dancers ushered him from place to place. The song cut to silence, and Timberlake stood in a spotlight, basking in a solid thirty seconds of screams. Clearly, this crowd needed no winning over.

But he continued to work it – “It’s about 9.7 rigt now. We’re gonna turn it up to 10” – dropping the ultra-sexy “Rock Your Body” and melding it into the crackling audio collage of “Don’t Hold The Wall.” A pivoting microphone at center stage allowed for some sweet dance moves, as well as a prop to punctuate the cover verses he slipped in throughout the night – Kanye West’s “I Am A God” showed up in “Like I Love You,” a few lines from Boyz II Men’s “Motownphilly” preceded “Drink You Away.”

“Shoutouts to Nathan, Shawn, Wayna,” Timberlake said. “They’re probably out touring the world or in Vegas or something, but those are my guys. They heavily influenced me as a lad.”

He also noted that two of his bandmates hailed from Philadelphia – powerhouse drummer Brian Frasier-Moore, and bassist Adam Blackstone – and he randomly shouted out a percussionist in The Roots crew. “Frank Knuckles runs Philadelphia,” he said. “You can quote me on that shit.”

The pacing of the show was tremendous, with a white baby grand piano popping up on a riser for “Until The End of Time,” and the one-two knockout that closed the first set; a medley of “Holy Grail” (his showcase moment on Jay-Z’s Magna Carta Holy Grail) into an epic “Cry Me A River.”

During the second set, the catwalk propped up on the aforementioned lift and began it’s journey across the venue, bringing Timberlake and his crew in closer contact with the crowd along the sides. The soundtrack to the move was “Let The Groove Get In,” 20/20‘s afrobeat-rooted dancefloor jammer, and it further amplified the existing party vibe of the show. (I lost count at this point how many times Timberlake used the word “party.”) At mid-arena, he went reflective, hitting the doo-wop vibes of “That Girl” into an acoustic cover of Elvis Presley’s “Heartbreak Hotel,” using the sensitive “Not A Bad Thing” as a springboard to that outstanding “Human Nature.” Even among those in the audience using these quiet moments as a beer break, you could see heads turning to ascertain what was coming next.

Back on the main stage, the parade of songs and energy built to a tremendous crescendo. “Take Back the NIght” mixed with Kool and the Gang’s “Jungle Boogie,” “Murder” led into a spot-on rendition of Bell Biv Devoe’s “Poison.” (Timberlake: “This is for all the over-30 people in the house.”) And whatever was left after “Suit and Tie” was funneled into an impossibly euphoric encore of “SexyBack” and an absolutely lovely singalong of “Mirrors.”

Some day, decades hence, we’ll look back on the music of the aughts and see in it traces of genius in artists that were thought disposable, a lot of superficial noise in music that was thought groundbreaking. Timberlake doesn’t exactly fall into either of those camps. He’s obviously appreciated by a massive crowd that shows no signs of dwindling, and with the release of 20/20 – and productions like this show – the critical minds are coming around as well. Is he a modern day Michael Jackson or Elvis Presley as he might fancy himself, or a new Sinatra as he alluded with the exit music of “My Way”? Not exactly. He’s Justin Timberlake, and in time that will be a legacy unto itself.