Into It. Over It. rock sold out crowd at Union Transfer
Artists

Into It. Over It. rock sold out crowd at Union Transfer

This Saturday Into It. Over It. brought its highly anticipated headlining tour to Union Transfer. The quite literally stacked roster featured bands throughout many genres. First to hit the stage was Hurry, an alternative pop band featuring Matt Scottoline of Everyone, Everywhere. Hurry creates a very unique sound by mixing pop vocals with fuzzy punk riffs. Scottoline didn’t just bring a killer opening performance but also all the laughs, including throwing tee shirts that read “I saw Hurry open for a band I like” into the audience.

Philly punk staples Glocca Morra preformed next. Glocca Morra fast paced puck completely transformed on the large stage of the Union Transfer. They brought tons of energy to the show and got the audience moving around. 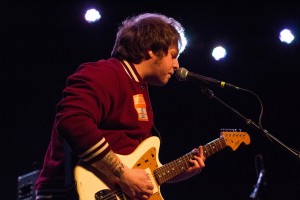 Completely switching gears, indie pop band Great Big Pile of Leaves brought a set of sing-along lyrics and bouncy melodies. Conceptual emo band The World Is a Beautiful Place & I Am No Longer Afraid to Die followed, playing the most original set I have seen in a long time. With seven members (including spoken word performers), they brought a huge amount of depth, and showed what a punk show can be. TWIABP’s performance really transported that audience to another place, and was definitely a highlight of the evening. 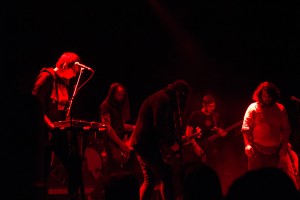 Last up was emo revival poster child Evan Weiss with Into It. Over It. The band is currently on tour promoting their acclaimed new album Intersections. Weiss always puts on a good show and tonight was no exception. There was an awesome energy level surrounding this (semi) hometown show for the Jersey-born Weiss.

The set was perfectly balanced with old and new material, and Into It. Over It. had fans sing dance and crowd surfing. One fan even did a front flip into the crowd – one of the most bad ass displays of stage diving I had seen in a while. It was definitely an excellent night for emo. Check out a full gallery of pictures below.