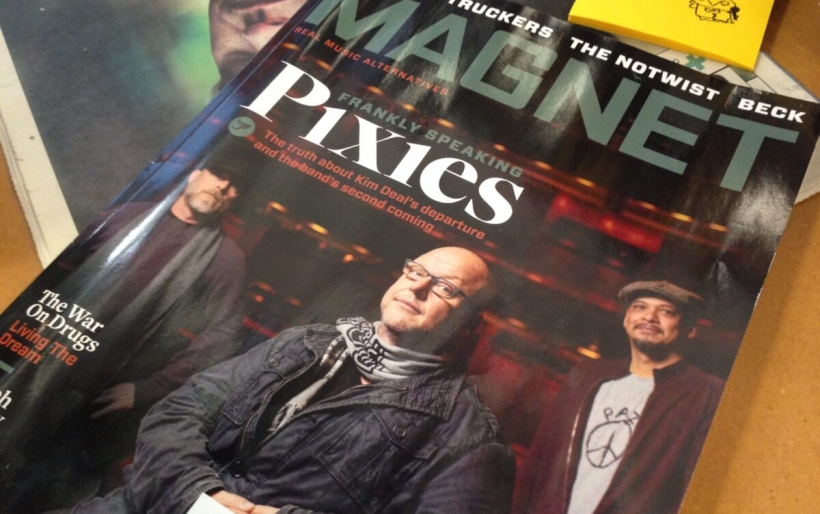 Last month, alt-rock icons Pixies played a double-header show in Philly, following up a lively stripped-down Free at Noon at XPN with an electrifying headlining set at the Electric Factory.

Well, electrifying except for one thing. There was no encore. The set approached thirty songs and was nearly two hours long, but when the band left the stage, it left for good. Here’s how our Chris Sikich described the scene at the time:

After what seemed to be a joyous end to “Nimrod’s Son,” with Santiago having great fun with his guitar and even exchanging his hat with a smiling Lenchantin, the band did not return — despite playing an encore at every other show on the tour, the crowd loudly clapping and calling for more, and the stage seemingly set for a return.

Certainly ruling the soundwaves is hard work and not always satisfying for all. But even though the abrupt ending left a sour taste for some at the end of the night, the rare delicacy of Pixies’ ferocious sound is destined to bring fans back as long as the band deigns to tour.

Chris was more diplomatic than commenter Pat Bateman, who weighed in to say that the Pixies earlier acoustic performance was:

Unlike the evenings performance @ the Electric Factory where they hardly acknowledged the crowd and then unceremoniously walked off and never came back for an encore. Tweeted by Black Francis yesterday we weren’t enthusiastic enough as a crowd but now deleted. What a douchebag. #howtoloseafanin140charactersorless

The story develops with the latest issue of Magnet Magazine, out today. It features an epic, 7,000 word cover story interview by Jonathan Valania (of Phawker fame), who sat down with Black Francis backstage at the Factory show in question and (among other things) got a very honest explanation of what happened from the artists’ perspective. The juicy pull-quote goes like this:

The crowd didn’t earn an encore. I’m old-school that way. I’m Vaudeville. I find that when the audience is younger, they want you to hold their hand and smile and kick the beach ball around, and we don’t do that. We don’t do jazz hands.

On the one hand, the tradition of the rock show encore is played out and tiresome. It’s like, come on, we stand there, we cheer, but we know you’re coming back. Because EVERYBODY comes back. Because it’s expected. So kudos to Pixies for taking that back and reserving the encore for times when it actually means something.

On the other hand: ouch.

To read more of the interview, which also touches on Kim Deal’s departure from Pixies with similar candor, check out an excerpt over at Phawker. For the entire thing, find yourself a copy of Magnet at your local newsstand or order one online. Below, a video from happier times and our Free at Noon concert.