An evening of folk, rock and country inflected music from the Cowboy Junkies - WXPN

An evening of folk, rock and country inflected music from the Cowboy Junkies
Artists

An evening of folk, rock and country inflected music from the Cowboy Junkies

Last Saturday night at the Dennis Flyer Theater at Camden Community College in Blackwood, N.J., folk-rockers Cowboy Junkies took center stage. Playing to a one-third-full auditorium did nothing to diminish the quintet’s performance, and Margo Timmins’ vocals were stunning, despite frequent coughs between songs. With the thick velvet of her syllables haning in the air, her brothers – guitarist/lyricist Michael and drummer Peter, bassist Alan Anton and multifaceted string- and percussion-player Jeff Bird, the band filled the auditorium with folk, rock and country inflections. 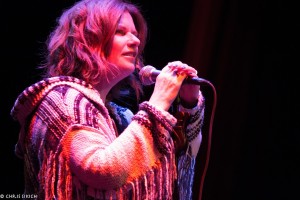 The night was divided in half, with the first set featuring newer material and the second focusing on older fare. For the former, they delved into their Nomad album series, including a stirring rendition of Vic Chesnutt’s “See You Around.” Other recent highlights included “Fairytale” and “Demons.” Rather than just playing to appease those there for their iconic cover of Velvet Underground’s “Sweet Jane,” Cowboy Junkies nestled that in the second set amid works from their classic The Trinity Session and Lay It Down, among others. “Sweet Jane” still has the same slow-burn glory it did upon first listen 26 years ago, but other songs, like “Misguided Angel” and “I’m So Open,” sounded just as brilliant.

Despite a single encore treat in “A Common Disaster,” there was no short-changing the crowd. Sweet harmonies, haunting mandolin, the audio charge of the harmonica, and the rich depths of the lyrics were just some of the reasons Cowboy Junkies rocked. The small audience suggests listeners have deserted this wonderful, still-vibrant band, but why? Whether you come back now or join anew, you’re sure to be hooked.