We’ve seen artists and songs take the world by storm before, but never a song like “Royals” by an artist as young as Lorde. The story you haven’t been hearing, however, is how her entire album, Pure Heroine, has stolen the hearts of so many, and how her live performance will steal the hearts of many more yet. I’ll say it now: Lorde isn’t just a precocious pop singer with one Song of the Year already under her belt, but a remarkably talented singer and songwriter whose success has only just begun.

Last night at the Tower Theatre, Lorde greeted a crowd screaming with excitement alone, singing the first few verses of “Glory And Gore” in a way that only teased at the richness of her mellifluous alto before the curtain behind her rose to reveal her simplistic two-man synth/drums band. “Biting Down”, the digitized interpretation of one of those call-and-response gospel songs, felt just like, well, a gospel song, as the crowd sang in near worship of their queen. “I really like you guys a lot,” she said after her voice finished cutting through the warm mix of “White Teeth Teens”, “it feels like a festival in here.” 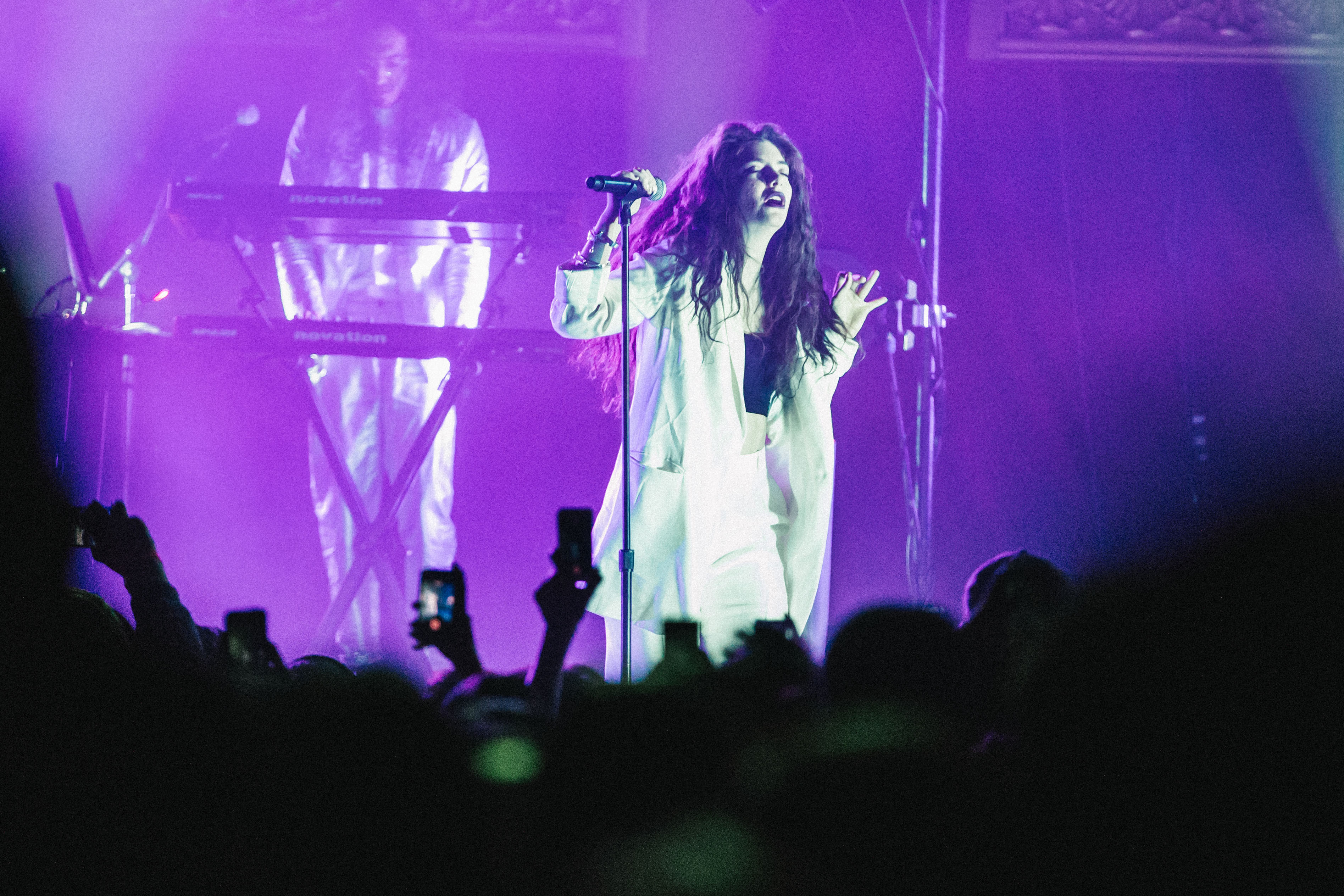 Before breaking into “400 Lux”, a song about simply killing time in the suburbs of Aukland, New Zealand, Lorde shared that she had been out driving in Philly’s suburbs earlier, and was struck by how similar our area is to her own.

“Bravado” was sonically huge, and “Easy” (a collaboration with Son Lux) quite possibly even more so, relying on crunchy percussive elements and the implementation of her own voice in orchestral chordal arrangements. In one song was the electronic musical gusto of groups like the XX or Atoms For Peace and the remarkably mature, full-bodied voice of a 17-year-old.

If Lorde’s previous remarks weren’t enough to add a personal touch to an impressive night of music, the story behind “Ribs” certainly was. It goes something like this: her sister decides to throw a house party that ends up being a whole lot bigger than they expected, and Lorde ends up trying to fall asleep with her friend, frightened by how difficult it is to keep two feet in completely different worlds. The orchestration, she added, was written to be “soft and comfortable sonically”, because interestingly enough, she was the one that needed comforting, but was happy to share that comfort with the world.

“Royals” was all you expected to be and then some. The minimalist backing from her band speaks to the extent that Lorde’s voice is an instrument of its own, and a unique one that. “Team” was filled with energy and topped off with a barrage of multicolored beams of light, a prolonged instrumental interlude during which Lorde left the stage, and bursts of confetti cannons as she returned donning a shimmering gold robe. “A World Alone” was, lyrically, quite an apt finish to the night, Lorde singing the opening lines: “I feel grown up with you in your car, I know it’s dumb.”

It’s easy to doubt that Lorde’s success will continue, especially given the almost absurdly widespread popularity of “Royals”, but her show at The Tower convinced me otherwise. To begin with, she’s an excellent songwriter, and her lyrics address some difficult issues. Her voice, even regardless of her age, is one of the richest, most unique instruments out there. Lastly, Lorde puts on a remarkable show, even if her dancing is a little, well, different. Lorde is one of those rare instances of a truly complete artist, and I doubt this is the last we’ll be hearing of her.