SXSW Dispatch: Staying put and slamming around to Against Me!, The Front Bottoms and Placeholder at Brooklyn Vegan's showcase - WXPN | Vinyl At Heart

SXSW Dispatch: Staying put and slamming around to Against Me!, The Front Bottoms and Placeholder at Brooklyn Vegan’s showcase
Artists

SXSW Dispatch: Staying put and slamming around to Against Me!, The Front Bottoms and Placeholder at Brooklyn Vegan’s showcase

Part of the appeal of the annual South By Southwest festival is no doubt wandering from venue to venue in downtown Austin, catching bits of sets by dozens of new bands, seeing where the music and the crowd may lead you.

But there’s something to be said for finding a venue – or party, or showcase, or whatever – with a lineup that’s solid through and through, and just parking yourself there for the night. For me, Brooklyn Vegan’s show at the Red 7 Patio last night was just that. The headlining set by Florida’s Against Me! would have been enough to draw me in – their new rager Transgender Dysphoria Blues is alreadyone of the year’s best, and they were at the top of my bands-to-see list – but they shared the bill with a enticing set of their (mostly) punk scene peers, from Lancaster screamers Placeholder to Jersey popsters The Front Bottoms. And, for the most part, all the acts delivered.

California comedian / musical Harvey Sid Fisher got the night to a light start with a set that was briefly fun and mercifully brief. His shtick is pretty one-note – he’s old, and he’s raunchy, and he sings about raunchy old guy things, and yeah. It’s the kind of humor that wears thin quickly, and while he had the modest crowd chuckling at first (many were still queued up in the alley behind the venue), he wrapped it up as their attention began to wane.

In contrast, Placeholder followed with a full-throttle set that was too brief. These guys might not have the most accessible sound (if you’ve got an aversion to growly vocals, they aren’t for you) but their energy and chemistry are undeniable, and captivating to watch. Frontman Brandon Gepfer is a very physical performer, flinging himself around the stage, into the speakers and his bandmates who reciprocated right back. He told the crowd that they’re used to playing “basements with like ten people,” so this was the biggest gathering they’d played for on tour. Would have been awesome had they played for a little longer, though, since the patio was just filling up when they left the stage, setting the room up for Gainesville’s Frameworks and their melodic spin on late 90s hardcore (a la At The Drive-In, Boy Sets Fire).

Cheap Girls from Lansing, Michigan was the only real disappointing set of the night – their songs are tremendously hooky power pop earworms akin to early Replacements jams, but their stage presence is nil; singer Ian Graham stands at the mic with his eyes closed, Adam Aymor riffs on guitar with his head buried in his hair, and the crowd predictably bobs their heads while checking Twitter on their phones.

The Front Bottoms, on the other hand, are pure interaction – sing/screamalongs, hi-fives, someone buying singer-guitarist Brian Sella a Guinness and daring him to chug it. The audience packed in towards the front of the stage, and became a mass of pushing, shoving, smiling bodies by the time “Twin-Size Mattress” rolled around Amusing aside: a dude in the crowd who books shows in Orlando talked before their set about how he’d never seen or heard of them, but everybody told him they were great. I concurred, and he countered “But they’re acoustic, though?” “Well, he plays an acoustic guitar,” I explained. “But they’re pretty badass.” “Um, I’ll take your word for it,” he replied.

I guess “badass” is relative, considering he might have been there to see brutal hardcore outfit Touche Amore, who absolutely pummeled the stage with their performance that followed – think the physicality of Placeholder, amped up about five times. Think of the sense of tension and catharsis of Converge, Paint it Black or Pissed Jeans. Again, not a sound for everybody, but holy cow what a spectacle to watch.

Against Me! | Photo by John Vettese

Wrapping the night around 1 a.m. was Against Me!, playing an hour-plus set highlighting the new LP and digging back through the band’s catalog for sure-fire crowd-pleasers like the title track of 2007’s New Wave and the singalong “I Was A Teenage Anarchist” from 2010’s White Crosses. The crowd that had begun to dwindle slightly – it was a super chilly night for an outdoor show – but the people who stayed were massive enthusiasts on par with the devotion The Front Bottoms and Touche Amore saw, slamming and swaying and screaming along.

Since singer-guitarist Laura Jane Grace came out as transgender in 2012, the band kind of went into reset mode: as she said in a Spin interview back in January, the path to the new album almost destroyed Against Me!, but with the enlistment of new players and perhaps her tightest collection of songs – the album is simultaneously anthemic, provocative, insightful and massively catchy – the band persevered. The patio was a smaller space than Against Me! has probably performed at in a long while, but if the reception the band saw – and the energy it brought to the stage – is any indication, it will prove to be a rare occurrence. Check out photo highlights and a full-show gallery below. 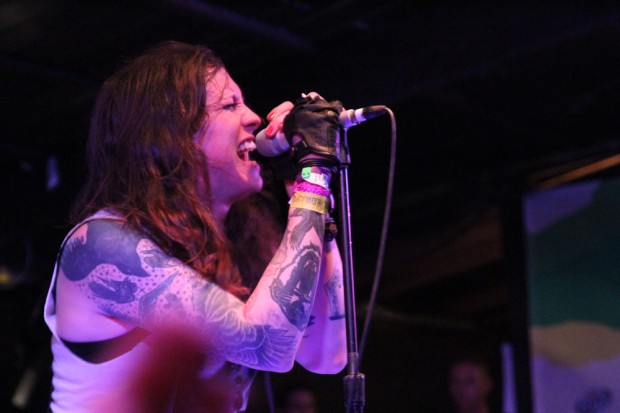 Against Me! | Photo by John Vettese 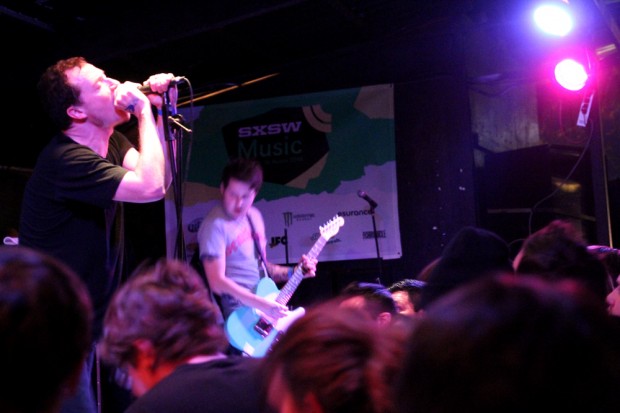 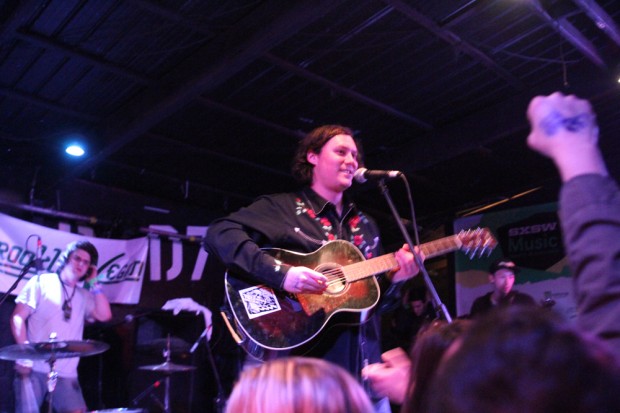 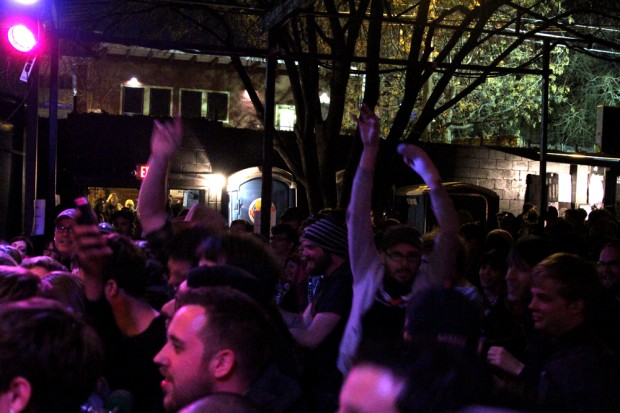 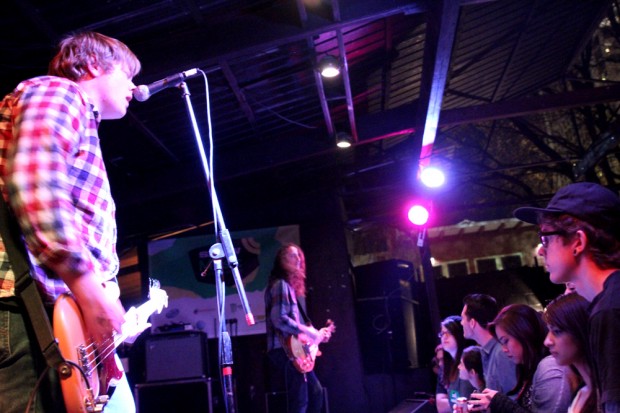 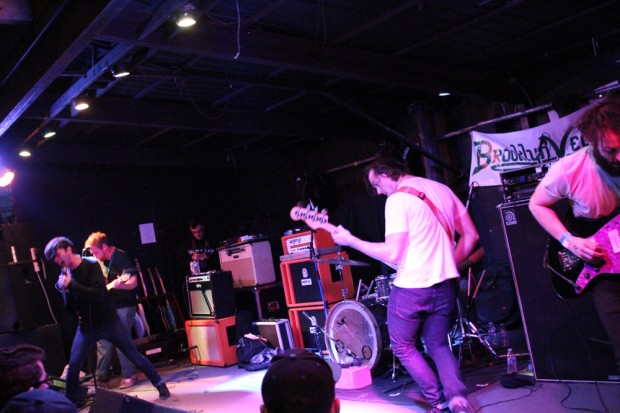 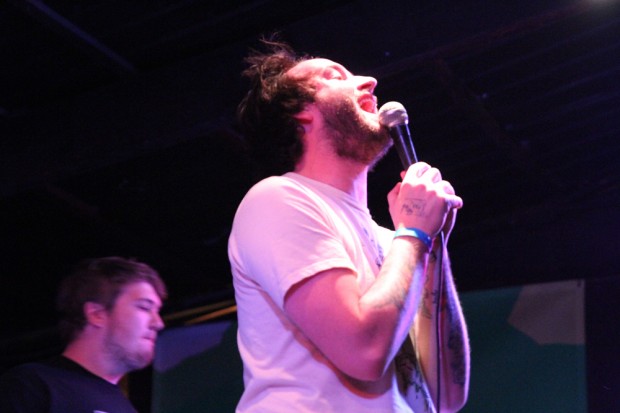 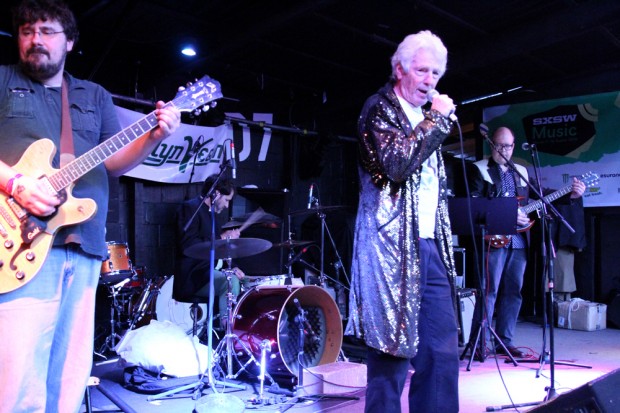 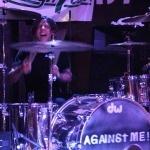