A blueish grey three-piece suit with hulking obtuse triangles of lapels hung from a hook at my desk yesterday afternoon. It’s a wardrobe ensemble I hardly wear enough, one I picked up from Philly AIDS Thrift years back and mostly use for Halloween or otherwise ostentatious dress purposes. In other words, it’s ridiculous and fun to wear, and I’ll wear it when there’s an excuse, but it would not be my everyday outfit – even if I did work somewhere where suits jackets were the prescribed attire.

My coworkers walking past my desk yesterday had a similar reaction as I did when I spotted the suit on the rack. “This is sharp! Why is it not on you right now?” But when I explained – it was my outfit for last night’s Arcade Fire concert – I was met with cynical grumbles.

Back in November, the Montreal art-rock band somewhat infamously issued a caveat with the tickets their first-ever arena tour: “NIGHT OF SHOW: Please wear formal attire or costume.” This request was subsequently picked apart and dissected in a blogosphere firestorm of vitriolic screeds. Quoth Slate:

Asking attendees to dress up might seem to restore an air of specialness to unspecial tour stops at unspecial concrete behemoths that double as ice rinks and basketball courts—but nothing about a routine date in an arena decked out in corporate branding is arty. And demanding that fans old and young scale many flights of steep stairs in ball gowns only to sit in seats possibly soaked with overpriced Bud Light from last night’s hockey game seems less than thoughtful.

Or more to the point, as Stereogum put it in their poll “Is it OK for Arcade Fire to Have a Dress Code at Their Concerts?”

Demanding that 23,000 Kentuckians dress up like an extra in Baz Luhrmann’s Great Gatsby to see a rock band at the KFC Yum! Center? I dunno. The author prepares for flight in his Arcade Fire suit. Yes, he is aware he is not pulling off the stache. No, he no longer has the stache. But it went with the outfit so perfectly.

Some of the response I encountered yesterday was equally angry – “How dare they etc. etc.” – like as if it was some sort of grave demand on the part of egoistic musicians. Like there had to be some sort of conversation a la Stereogum’s about how it’s not okay for artists of any stature to ask their fans to dress up, how there needs to be some sort of moral outrage here.

Meanwhile, my view was – and continued to be – look, guys. It’s just a rock band. Telling me to wear a costume to a show. I mean, really? Costumes? You think this is actually serious? (As the band said on Facebook, it wasn’t, and folks need to chill.)

And let’s say that wasn’t the case, and I was going to be denied admission to see one of the best musical acts of the past decade had I shown up to the Wells Fargo Center in a hoodie and jeans. Either way, it’s a fine (and, for me, rare) excuse to have some sartorial fun and break out this thrift store outfit. Thankfully I was far from alone.

You could first spot the dress code-observing fans as the Broad Street Line shuttled further south from the Walnut-Locust station. Some – with the sparking green derby hats and tinsel boas – looked they might be out for a St. Patrick’s Day happy hour, or still clothed from whatever suburban pub crawl they were on the day before. A handful of couples looked like they were simply headed out on a fancy date at Victor Cafe or Cucina Forte: a suit jacket and tie, a flashy but not overly-ornate dress. When the subway hit the end of the line at Pattison Avenue, we saw that, nope, we were all headed to the same place. 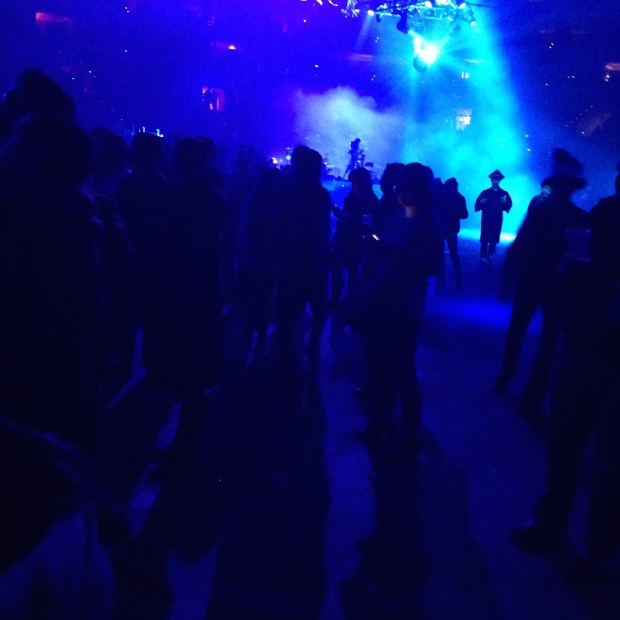 My initial prediction was that about 20, maybe 25 percent of the crowd would be dressed up for the occasion – but that the 25 percent would be so amped about doing it that they’d blast their outfits out onto social media (I did), thus creating an organic illusion of everybody dressing up. And from what I saw in my social circles, this kind of did happen.

So in a sense, we were all willing participants in Arcade Fire’s Reflektor tour marketing scheme – something that actually started back in the fall with all that online outrage over he dress code, some of which was no doubt manufactured faux-outrage, designed to reverse-psychologically get people like me to say “You know what?! I’m wearing a suit, I don’t care what Stereogum tells me to think.” Which in reality is exactly what Stereogum wanted me to think.

But all that – whether or not I was playing into some massive media ploy on the part of the artist / Merge Records / Universal Records / whatever other corporate parents and subsidiaries – is irrelevant. Going to a rock concert that doubles as a costume party is a massive amount of fun, some weird amalgam of prom and Halloween and New Year’s Eve and maybe a murder mystery party. And if me having fun helps a band I enjoy sell records and concert tickets down the road, you know what? I’m okay with that. 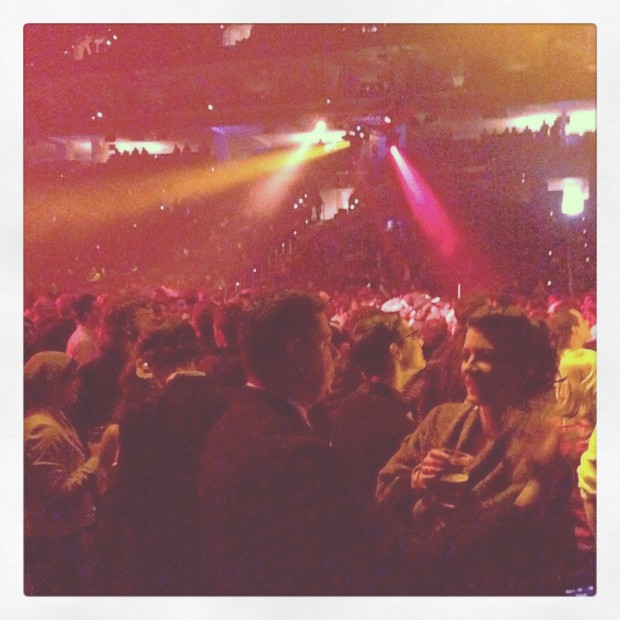 A scan around the venue during opener Kid Koala put the attired attendees at a bit higher percentage than I thought; maybe 35 or 40 percent. A guy dressed like the Cat in the Hat stood next to a dude in a Flyers hoodie; people in flannel rubbed elbows with people in fancy vests. About half of the costumed went the formal route (one woman had either a fur or fake fur shawl covering her shoulders, which must have been awesome given the cold breeze on the walk in); the rest opted for silly costumes (my faves: an astronaut carrying a helmet, a prize-winning 4-H fair rabbit, the scarecrow from The Wizard of Oz, several people in graduation robes, one person in an Easter bunny outfit).

Were some of these people plants? Without a doubt. Did that possibility make it any less enjoyable to watch masquerading couples slow dance to Kid Koala’s cut-ups of Andy Williams and Louis Armstrong, or see Captain America do handstands to a wild Dan Deacon beat? Did it make Deacon’s crowd participatory madness any less exhilarating – following his lead and running from one side of the arena to the other, hi-fiving as many of your audience-mates as possible? I almost got flipped over on my head a half dozen times, but I never stopped laughing.

Letting go of your inhibitions and living for yourself seems to be one of the underlying themes of Arcade Fire; and in this setting, it couldn’t have felt more right. 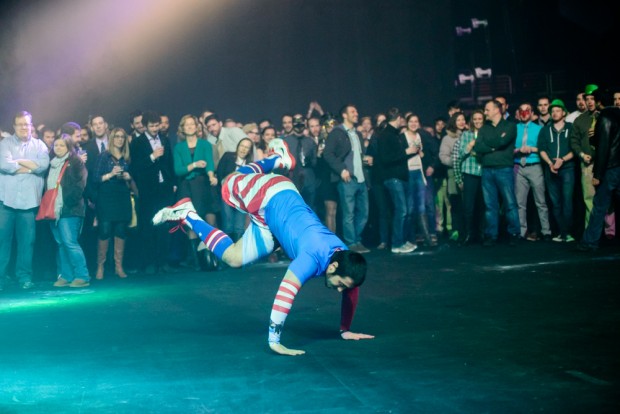