Could they pull it off? That seemed to be the question on the minds of the music community when Arcade Fire announced a winter arena tour in support of its 2013 double LP Reflektor. Could musicians that got their start ten years ago as a small-scale indie art-rock band with massive ambition finally bring their show to an arena-sized audience? Was the group ready for a production of this scale? Were that many people willing to travel with them down the heady rabbit hole of Reflektor, a surrealist patchwork commenting on modern life in a disconnected world?

Despite an initially positive critical reception to the album’s release, there was a noticeable backlash – Arcade Fire and frontman Win Butler were dismissed in some circles as pretentious. Their SNL appearance had viewers scratching heads. Their tongue-in-cheek “formal attire required” caveat for the tour was viewed (by evidently humorless commentators) as a serious demand. And ticket sales proved slow in venues of this size, with several markets (including Philadelphia) resorting to a Groupon campaign to urge them along.

But when Arcade Fire took the stage at Philly’s Wells Fargo Center last night, all that baggage went away. The band’s two-hour set was compelling, sharply executed and endlessly creative. And the crowd, though not a sellout, was a strong turnout, filling the arena up through the rafters with many taking part in the masquerade ball / formal attire end of things. (More on that later.) 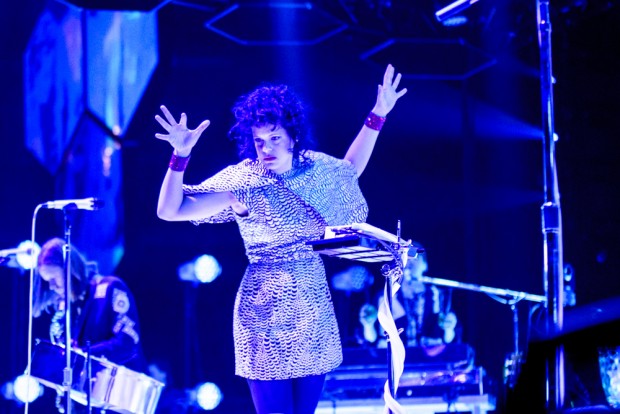 Arcade Fire took advantage of the full span of the arena’s floor, with Butler emerging on a mini stage near the soundboard for a sparse rendition of Neon Bible‘s “My Body is a Cage” (illuminated with a human disco ball, the Reflektor of the album’s title). As the full band kicked in on the final crescendo, he scurried around the arena’s perimeter and hit the stage to the disco bump of “Reflektor.” From there, it was a strong opening sequence, with the groovy dub of “Flashbulb Eyes” leading into back-to-back jams from 2004’s Funeral, “Neighborhood #3 (Power Out)” and “Rebellion (Lies),” with thousands of voices singing along to a euphoric conclusion.

A pause for band and crowd to catch their collective breath gave us a chance to reflect (har, har) on what we’d seen. When he wasn’t playing guitar, bass or piano, Butler was working the crowd, grasping hands – but also snatching the smart phones from the outstretched arms of fans attempting to capture the moment. “What if the camera really do steal our soul?” he sang staring straight into someone’s screen during “Flashbulb,” and the point was clear. Put away the phones, put away Facebook; unplug and be here in the moment.

Doing that meant riding emotional highs and lows – “Neighborhood #1 (Tunnels)” followed a sweeping instrumental build into a cathartic climax. “We Exist” was more thought-provoking, with Butler explaining “This is a song about the most awkward conversation in the world: between a gay son and his dad. We live in a world where people don’t understand that some of us are born with different sexualities, different whatevers. But we are.” The brooding synthesizer pulse was lightened up with a small group of fans leading the room in a playful dance seen earlier in Kid Koala’s opening set. 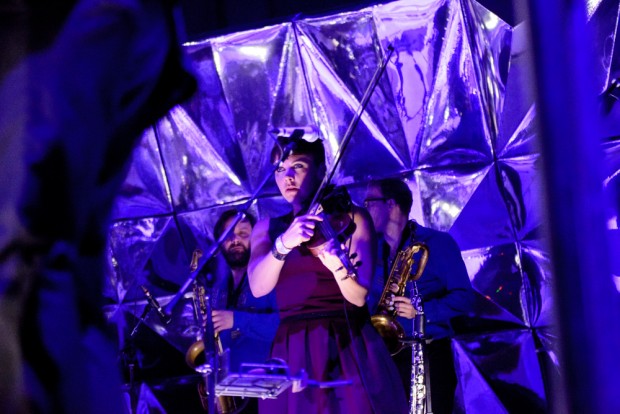 “No Cars Go” split the difference – high drama, with stirring playing from violinist Sarah Neufield, and rousing fun, with multiinstrumentalist William Butler acting as designated hype man, wildly hammering the beat on a tom drum at the foot of the audience.

Further illuminating the set was an ever-shifting array of projections behind the band, and frequent re-usage of that middle stage we saw earlier. Singer Régine Chassagne sang “It’s Never Over (Oh Orpheus)” from that riser, directly facing frontman Butler while flanked by people in two skeleton outfits in a gripping call and response. At the encore, a group of players in Arcade Fire’s signature papier mâché giant heads popped up on the riser, announcing themselves as The Reflektors (“We’re the real band!”) and launching into a pantomime to Chubby Checker’s “The Twist.”

“What is this crap?” Butler shouted as the full band rushed back onstage. “Chubby Checker would be furious.” Definitely one of the more amusing encore breaks I’ve seen. 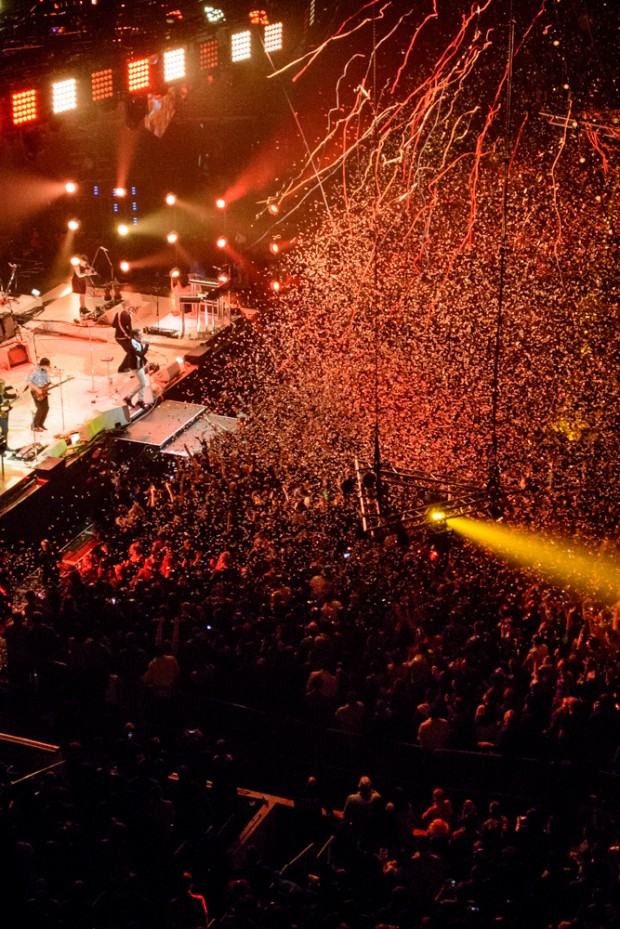 Here, as the band launched into a raging “Normal Person” dedicated (somewhat tritely) “to everyone who picked on me in high school,” Butler played the confrontational angry rock star persona we hear at points on Reflektor‘s transitional skits. This is the weak point of the show, and we saw a touch of that earlier, when he apropos of nothing opted to slag a certain pop singer who comes to Wells Fargo next month. (“We have the most amazing fans in the world that we can play rooms this size. It’s us and fucking Katy Perry. This song is actually by Katy Perry, and it’s called ‘Rococo Bubblegum Cocoa.'” Which, I don’t know how you feel, but I think if he can’t acknowledge that “Roar” is an amazing song, his heart is cold and disconnected as those people with Smart Phones he was making examples of earlier. Anyway.)

But this character gave way to another when he popped on one of the giant heads, and the band was again playful fun mode – covering Boyz II Men’s “Motownphilly” – before wrapping the night on a massive explosion of confetti on “Here Comes The Night Time” and the chilling finale of “Wake Up.”

There was a lot of spectacle Arcade Fire’s show, an emotional rise and fall, but most importantly, a sense of uninhibited joy. Hence the encouraged formal attire. Hence the early vibe as Kid Koala described it: “Don’t be deterred by the size of the room. I just consider this one big house party.” Hence second opener Dan Deacon, who led the crowd through a chaotic dance off until one masked participant revealed himself to be a sheepishly smiling Win Butler – to the early arrivers’ delight.

It’s like we hear in Funeral‘s lyrics about our dwindling sense of spirit as we advance into adulthood: “sleeping is giving in,” “our bodies get bigger but our hearts get torn up.” Arcade Fire is against that, and taps not only into their crowd’s fears and frustrations, but also their desire to be ungarded, to be unjaded, to not be one of those normals they sing about – “when they get excited, they try to hide it.”

And that’s why, for thousands of Philadelphians last night, the music and the show connected, letting Arcade Fire pull off a nuanced, highly artistic concert on the biggest stage in the city.