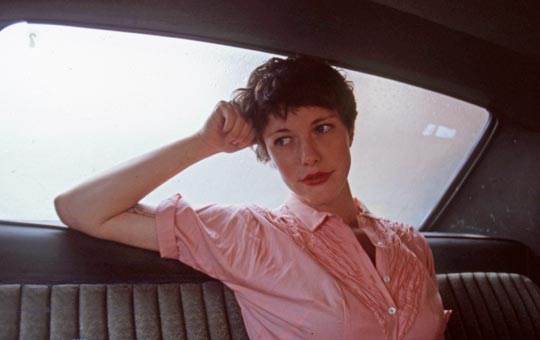 Esmé Patterson cut her teeth playing with the sprawling indie folk-pop 7-piece Paper Bird. She’s currently prepping the release of Woman to Woman, a brand new solo EP that takes the point of view of many titular women characters in classic love songs like Townes Van Zandt’s “Loretta,” the Beach Boys’ “Caroline No,” and Elvis Costello’s “Alison.” By turning the perspective around, Patterson sheds new light on songs we’ve heard a million times and probably never truly absorbed their meaning. For deeper investigation, read Jon Solomon’s interview with Patterson. Look for the release of this great set of songs in mid-April.

On this episode of Folkadelphia, we invite you to sit back, relax, and enjoy the intimate songs of Philadelphia’s Denison Witmer, performing as a duo with local guitarhand Ross Bellenoit, and sharing a number of songs from his latest eponymous album, released last year via Sufjan Steven’s Asthmatic Kitty label. On a personal note, Denison has been one of my favorite songwriters for a decade and it has long been a dream to host him for a session. In October of 2013, we made it happen.

Watch a live video of Witmer performing “Hold On”