Okkervil River delivers, and preaches, to sold out audience at Union Transfer
Artists

Okkervil River delivers, and preaches, to sold out audience at Union Transfer

If you stepped foot into Union Transfer on Friday, you’d look down at your ticket a few times to double check if you were in the right venue to see Okkervil River.

The lights on the small stage illuminated a backdrop depicting two sketched out trees with fall leaves. It was reminiscent of the background in the children’s corner of nearly any Barnes and Noble. The music that played as the anxious crowd awaited sounded like the beginnings of waiting music for a theme park ride. You know, the part where park employees keep you in one room where a 30-second theme plays until they haul you to the main attraction.

But the music was just the start of the anticipation. Doors to Union Transfer opened for the sold out show at 7 p.m., but it wasn’t until slightly after 10 p.m. when Okkervil River took the stage.

First up was Hundred Visions, an Austin-based band that oozed 90s Nirvana influences. Complete with a classic 90s jean jacket, lead singer Ben Maddox heavily interacted with audience members. At one point, he wasn’t afraid to stop after one of his songs to call out one who’d just been standing in the front row, nearly motionless. “Are you having a bad time?” he asked.

No response. Too shy, maybe? 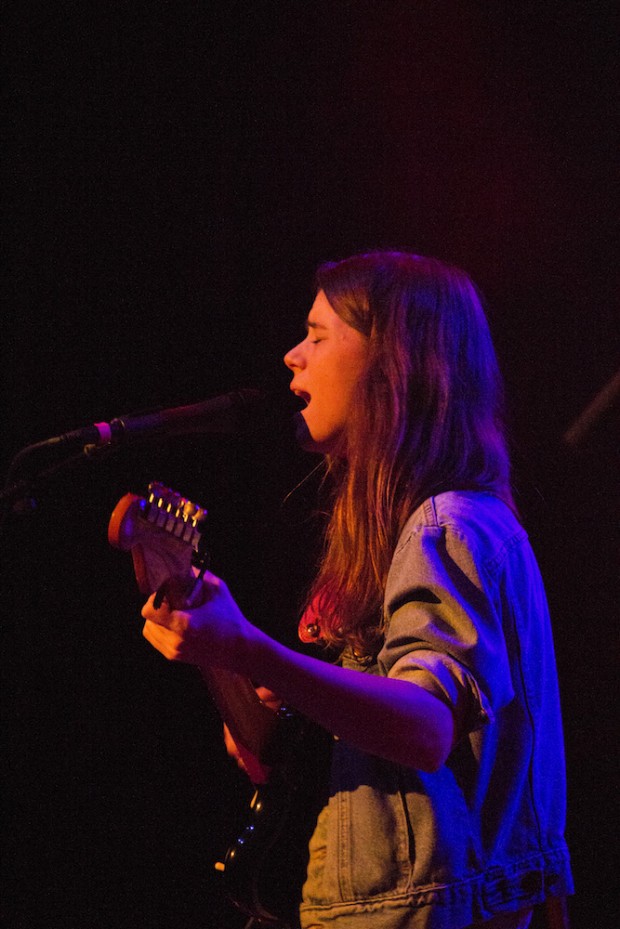 Aly Spaltro, who goes by the moniker Lady Lamb The Beekeeper, was next up on the bill. At an estimated 5’2”, Spaltro’s tiny stature filled the small venue to its entirety with its foot-stomping sound, shouting vocals and decadently indulgent harmonies. At one point, she exchanged her guitar for a banjo nearly as large as her to sing the powerful, hymn-like, not yet released “You’re Turning Violet, Violet Clementine.”

(I’d know because trust me, I’ve been looking.)

But the opener that really captivated audiences were Typhoon, the 12-piece supergroup that initially drew in a larger audience than Okkervil. The overwhelmingly large band utilized each and every one of its members with the horn section to the right, strings to the left and percussion and lead singer Kyle Morton split down the middle, balancing the crowd.

The stage lighting played along with Typhoon’s large sound, getting lighter, bigger and brighter with every heavy drumbeat and seemingly sporadic guitar note that was but carefully planned. 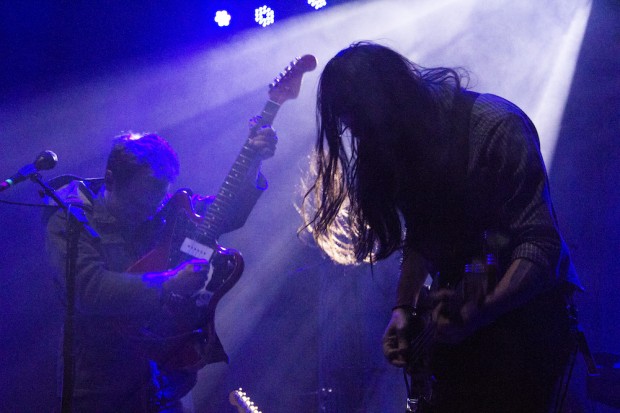 They harmonized together, and audiences gave in. Among the crowd, the lit up faces from both the sound and stage lighting showed fans singing along with the lyrics, flailing arms and fist pumps as a symbol of support of the band.

They exited the stage, and the audience knew what was in store. They prepared with bathroom breaks and purchases of beverages. Brave, they were, for leaving their coveted spots in the standing-room-only venue as Okkervil was about to take the stage.

It started with the singularly illuminated body of lead singer Will Sheff entering the stage as the audience hooted and hollered as the rest of the band slowly came upon the stage and fiddled with their instruments. Sheff welcomed us.

The lights shifted moods to match the band’s folky, soulful sound. Lights turned into rounded bubbles that danced upon the backdrop as Sheff’s vocals sounded nearly like a song bird’s calls, pairing well with the backdrop. His knees buckled often as he lifted the mic and his head toward the ceiling, fumbling with the cord loosely in his hand, like a modern-day, indie rock Jim Morrison. 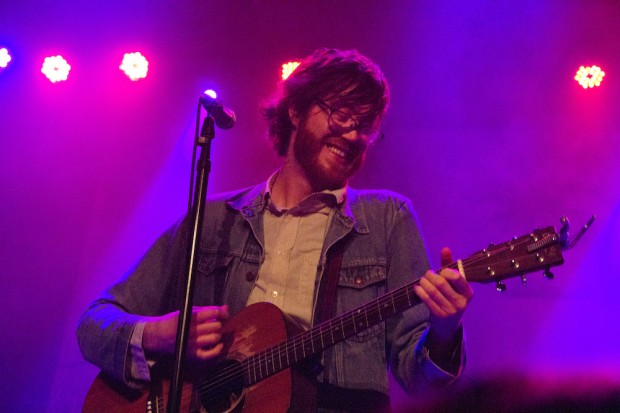 Audiences underwent a similar musical experience as they belted the lyrics to and jumped along with Okkervil stapes like “Stay Young” and “Down Down the Deep River” which came toward the end of their set, not during the encore, surprising many.

The band ended the main set with “Lost Coastlines” off of their album, The Stand Ins. The tune faded and the band exited as the audience screamed for more. First, Sheff returned to the stage and played an acoustic version of “A Stone.” The rest of the band followed, and after a lively rendition of “A Girl in Port,” Sheff began to preach.

The band began to build up the intro to “Unless it’s Kicks” and Sheff explained to the audience that this is the moment he had he been waiting for the entire night.

Through all the traveling on tiny busses across the country, to sitting in “shitty green rooms,” Sheff explained that he lives for performing and the energy that radiates from the audience. And all that was about to end in two minutes.

Encore:
A Stone (performed acoustically by Sheff)
A Girl in Port
Unless it’s Kicks