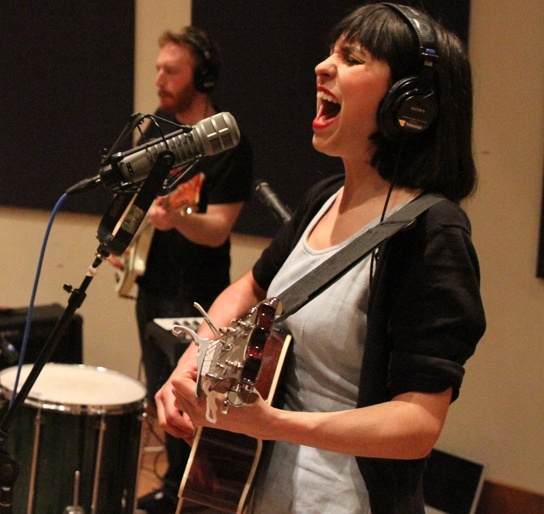 Local six-piece Tutlie might just be one of Philly’s most imaginative bands. There’s their excellent debut full length Young Cries, two years in the making and released digitally a few weeks back (premiered right here on The Key), ripe with dream-like synthesizer tones, arty structures and hooks galore. There’s the sound, which takes a cue from the studious musicality of Dirty Projectors while also echoing the charismatic harmony-driven vibe of Lucius and the whimsical arrangements of Buried Beds. There’s the subject matter: during their Key Session, the band played “Kaito,” a song newer than the new album, and lead singer and songwriter Jessie Radlow tells us it’s from the band’s next planned album: Gashadokuro, a concept record based on Japanese folklore. The band – which also features co-singer and multi-insturmentalist Rebecca Way, bassist Greg Diehl, guitarist Greg O’neill, drummer Mark Cruttenden and multi-instrumentalist Asher Brooks – gave us a tight performance, and if you dig the tracks you hear below, check them out in a month’s time when they open the show at City Rain’s album release party, May 1st at Underground Arts.