Photo by Kate McCann | http://katemccannphotography.com/index2.php#!/HOME
The side chapel of First Unitarian Church filled a few minutes after eight on the first night of April on what felt like the first spring-like day. Justin Walter entered and began playing his Electronic Valve Instrument, a rare wind instrument with an analog synthesizer. While Walter has worked with Iron & Wine, Wild Belle, His Name Is Alive and Saturday Looks Good To Me, he’s released his own solo material, which he showcased during his opening set. Heavy tones echoed around the chapel’s walls and a few more stragglers took seats on the floor of the room. Walter spoke briefly about his new album Lullabies & Nightmares, and thanked the crowd for coming to such a “special” space.

During a brief break, the energy built for the highly anticipated appearance of Colin Stetson, saxophone God. Stetson has performed and recorded with many bands and musicians including Arcade Fire, Bon Iver, Feist, Tom Waits, David Byrne, and TV On The Radio, yet his church performance was reserved for his solo work, which is magnificent. The few sitting on the floor scooted up to be sit right beneath the beast of a saxophone Stetson pulled out during his second song. His avant-garde and minimalistic pieces would sometimes last 20 minutes before the musician took a full breath of air again. The small audience was enthralled with each bellow that rung from the bass saxophone and ended the evening with a standing ovation for the force and fervor Stetson exhibited during his set. 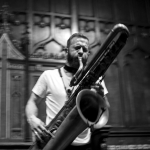