Armed with a mandolin and guitar as well as a voice rich with empathy and justice, Amy Ray stirred the ears and minds of an adoring crowd at World Café Live on Saturday night. With a band six deep and a growing catalog of solo albums at her fingertips, including 2014’s Goodnight Tender, Ray put on a stunning performance of Southern rock, country and folk.

The new record figured heavily into the night’s proceedings. Songs like “Hunter’s Prayer” (dedicated to a couple of her occasional collaborators in the audience), “Oyster and Pearl” and “My Dog” spun evocative tales around layers of fiddle and pedal steel. Among the supporting players were drummer Allison Miller, who had played with Natalie Merchant earlier in the day, and Megafaun’s Phil and Brad Cook. (Phil Cook opened the show with an odd yet lovely set.)

“Let It Ring” and “Johnny Rottentail” proved the most pointed moments of the night, with Ray playing mandolin with a punk-rock fervor. And even if she couldn’t satisfy every wish of the crowd (like “Laramie” or any Indigo Girls tracks), the joy was palpable. Fans danced and clapped throughout the 90-minute show and clamored for setlists and other relics well after the lights came up. The desire for more music will be sated in the summer when Ray and Emily Saliers bring the Indigo Girls to the new Delaware County venue Sun Center on August 12. 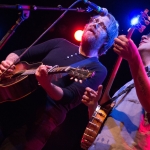