The lights went low, leaving only the glow of handcrafted wooden chandeliers hanging above the back bar. The audience packed into seats starting about two feet away from the stage and ending in the back of the large hall. Spot lights went up on a few mics and strewn string instruments as Maya de Vitry took center stage first, leading the hauntingly aggressive folk ballad “Adelaide.” 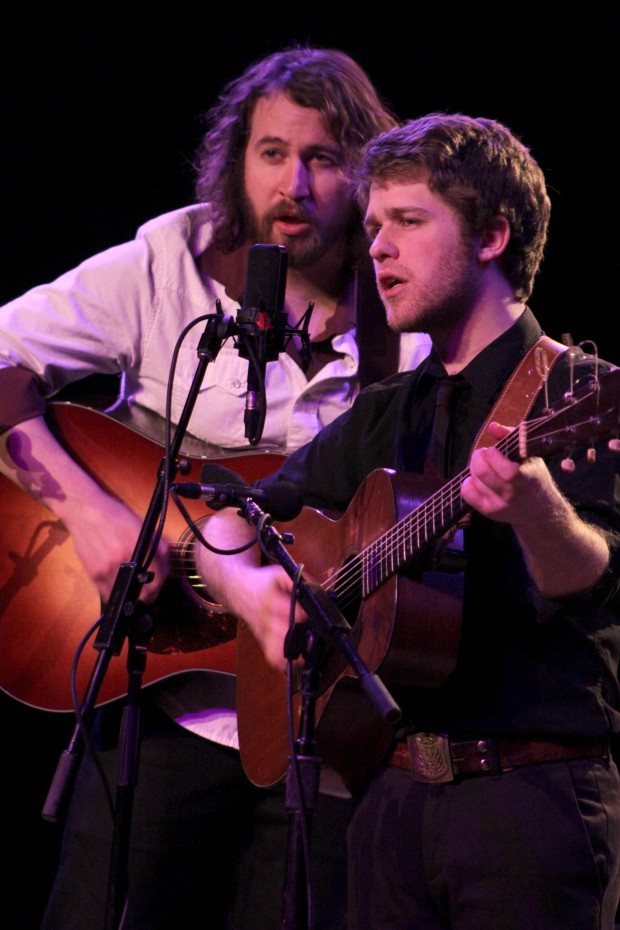 With the room buzzing with chatter and a stage to himself, Strause started the evening with a beautiful acoustic set reminiscent of Swedish folk singer Kristian Matsson. One at a time, he invited each of the trio to the stage to sing a duet. Telling the audience that playing with The Stray Birds is like having a little bit of Lancaster with him, Stause invited the three bandmates to the stage to help him sing an homage to Lancaster. This enchanting set is definitely one that you wouldn’t want to miss again. So plan for Strause’s return Lancaster on the 16th alongside David Wax Museum.

After a fifteen minute intermission to climb over people and refresh drinks, The Stray Birds came on with a humble confidence as they dedicated each song to someone or something special in their lives. “I want to send this song out to my dad. He can’t be here because he’s got a gig,” de Vitry states before starting “Harlem.” “That’s the kind of people I come from. My dad’s got a gig and my mom is at home watching basketball,” she chuckles while reassuring the audience that they will see her in Philly.

For a full two hours de Vitry, Oliver Craven, and Charlie Muench took turns sharing center stage and running through a flawless set of organic harmonies and carefully crafted strings. So not to taint the pure beauty, barely anyone wanted to sing along to favorites like “San Antonio Rose,” “Dream In Blue,” and their version of Nanci Griffith’s “I Wish It Would Rain.” Narrating how she seeks out the buildings that were in her textbook and wrote this song after visiting the Lorraine Motel, de Vitry precedes “The Bells” by saying “This song is for Martin Luther King Jr. and the vision that didn’t die when he did.” Finally returning the favor to Strause, the three invited him back on the stage to finish out the exquisitely crafted set.

They Stray Birds released their new EP Echo Sessions this past February and will continue with their American tour through May. Check out the photo gallery below to relive the Lancaster performance.