Despite Small Crowd, Vacationer and Hellogoodbye go big in Harrisburg

Harrisburg, PA is not exactly what one would call a prime destination when it comes to seeing live music. Often in the midstate, it seems that the state capitol gets passed over by the bigger tours that hit Hershey and the smaller acts which choose longstanding venues in Lancaster. In the face of the status quo, Hellogoodbye & Vacationer played a rousing show at Federal Taphouse in Harrisburg on Saturday night, to mixed success. After a brisk set from locals Very Americans, Philadelphian chill-masters Vacationer took to the stage, and dove headfirst into a huge set. Bombastic, bassy and sonically sprawling, Vacationer’s sound is something which goes beyond a simple definition to something greater than the sum of its many instrumentated parts. Even though lead singer Kenny Vasoli joked that “this is that chillwave, trip-hop stuff that all the kids are talking about,” both tracks from their debut 2012 LP  Gone – and new material from forthcoming Relief – showcase that the group is anything but chill when it comes to standing out from the pack.

As tight-knit as the band came across, Vasoli confessed that he wasn’t exactly feeling it at the start of the set. Halfway through, he came around and acknowledged that he had “got everything worked out”, and the already engaged crowd surrendered fully to the good vibes in the room. 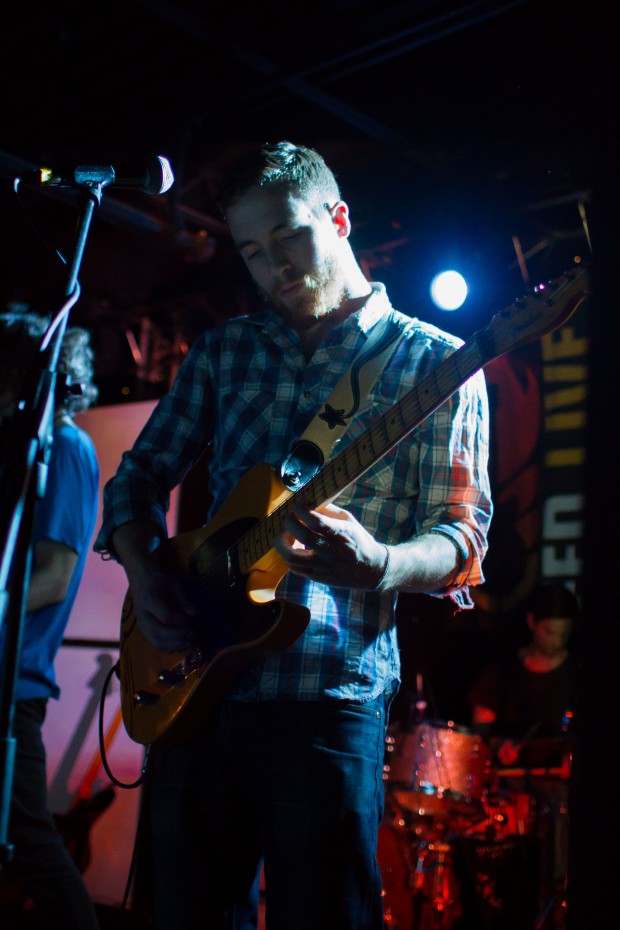 After bouncing through “Warmer” – the  b-side from their new single “The Wild Life”– Vasoli laughed and said “Don’t hurt yourself when you put that one on at home. Just let the chill-copter go for a spin, get in and take a ride.” The smattering of new songs in their set couldn’t have come at a better time of year; with temperatures on a rise, these songs are certain to be summer standards suited to both pool partyers and beach bums, alike.

When I caught up with the band before the show, guitarist Ryan Zimmaro noted that Vacationer was excited to be back in Philadelphia (catch them at Underground Arts on Thursday the 24th), and said that the hometown show would be a perfect energizer to help them power through the back half of the tour.

Bounding onto the stage which Vacationer had vacated, Hellogoodbye took the energy of the small-yet-excited crowd, and transformed it from chill to energetic. Fans who had been vibing hard to the downbeat tones of the previous set flowered into bouncing dancers as Forrest Kline and the other members of Hellogoodbye pulled out all the stops and tore into a setlist jam-packed with crowd pleasers. Kline blurred the line between band and audience, often taking advantage of the loosely packed area in front of the low stage to jump down and sing in the crowd, or take selfies with anyone who wanted them. At one point, Kline even stood in the front row and chanted for a certain song, then jumped back on stage and said “alright, alright! This one goes out to that guy with the crazy mustache in the front row.” Antics aside, Hellogoodbye has their own unique breed of energetic pop down to a science, and their snappy set reflected it. Initially worried about the absence of a horn section (personally my favorite part of Hellgoodbye’s sound), my fears were quelled when the group solidly executed that simply fun feel which they are so known for.

Alongside the summery riffs of 2010’s Would It Kill You? songs from 2013’s more electric Everything Is Debatable surprisingly enough didn’t seem out of place, especially coming on the heels of Vacationer’s similar sound.

Towards the end of the encore, a fan shouted a request, to which Kline replied “We play whatever we want to play!” No one in the crowd could help but smile as the band finished strong with an energetic, crowd-surfing rendition of “Here (In Your Arms)”, the very song that the fan requested.

Even though some might call a show with less than two hundred attendees a total bust, Vacationer & Hellogoodbye proved to be good sports about the whole thing. Taking it in stride, and still giving it one hundred percent, the bands gave Harrisburg an intimate show to be proud of, and certainly one that those in attendance are not soon likely to forget.

Hellogoodbye setlist
When We First Met
Getting Old
Finding Something to Do
Coppertone
When We First Kissed
…And Everything Becomes a Blur
The Magic Hour Is Now
Swear You’re In Love
Just Don’t Let Go Just Don’t
How Wrong Can I Be?
(Everything Is) Debatable

Encore:
Oh, It Is Love
Here (In Your Arms)