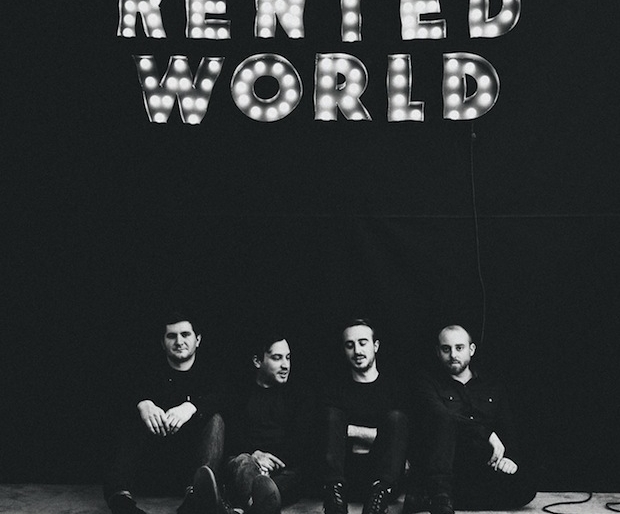 Rented World, the fourth full-length album from The Menzingers, is, for lack of a better word, big. That word can be construed in a few different ways. Yes, the track lengths themselves average in at a little bit longer (one song breaks the five-minute mark, a first for the Philly-by-way-of-Scranton punks) and they enlisted the audio muscle of producer Jon Low for this one, but there’s more to it than that. After three records, including 2012’s breakthrough On the Impossible Past, there’s a weight of confidence and precision laced throughout Rented World. And confidence allows songwriters to try some new things.

That idea presents itself pretty immediately on Rented World, especially when contrasted against On the Impossible Past’s Americana-leaning loose narrative of lyrical and melodic themes: Good things, nice things, American muscle cars, kids getting high, etc. Singer/guitarists Greg Barnett and Tom May keep the songs on Rented World decidedly contained. Barnett has mentioned in interviews recently that this was the first Menzingers album to not be solely written on an acoustic guitar; rather, songs were pieced and structured carefully instead of over a couple of chords. As a result, many tracks, with their riff-specific construction, feel like nods to ‘90s alt-rock – a fun direction to see The Menzingers explore.

But as with each Menzingers record, May and Barnett split songwriting duties nearly 50/50, and on Rented World, they continue to characterize their own differing methods. Barnett seems more keen on playing with genre and structure, all the while turning the mundane and less-than-pretty into the poetic. Opener “I Don’t Wanna Be an Asshole Anymore” is muted power-chord pop punk 101 and while he’s singing about trying to not be a shitty boyfriend, that conflict is also “I was a still-life trapped in eternity” and “I threw my emotions off a bridge / after taking them hostage with a shotgun.” On “I Know Where Your Heartache Exists,” a midtempo track bound to a backbone of riff-meets-lead-guitar handshake, Barnett turns a night kicked out of bed to sleep on the couch into an historical ages-recounting Alexandrian tall tale. By contrast, May writes songs that are less exploratory and more forceful. His contribution to Rented World proves no exception, as barnburners like “My Friend Kyle” and “Bad Things” would suggest. May has a central focus of packing as hard a punch in as short amount of time as possible. Bassist Eric Keen and drummer Joe Godino’s rhythm section gets flexed to different extremes based on the varying approaches to tracks here. “Transient Love” finds the pair taking a prominent role with its sparse guitar arrangement, and throughout Rented World the two are as tight as a fourth record would suggest.

Which brings us back to the main point about Rented World: it’s big. And while that bigness may not be the most unexpected quality of a fourth Menzingers record, it certainly is jarring at first to see such a distinction of ambition between this and On the Impossible Past or the rest of their discography. But once it sinks in for a second, this makes sense, and only feels obvious that Rented World should reach for such heights, especially when it’s hitting far more often than missing.