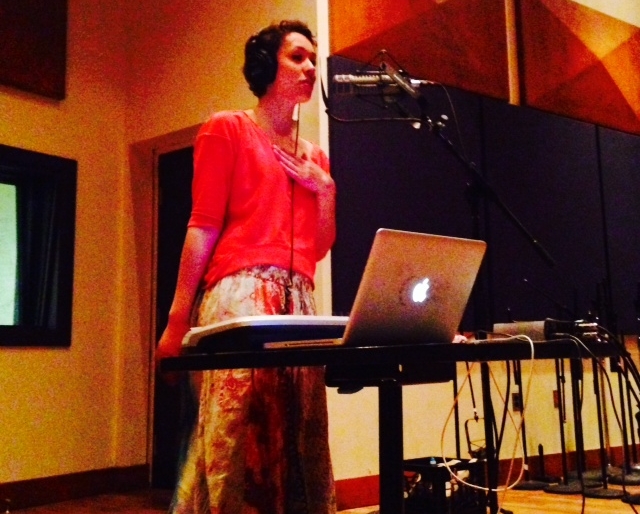 Late last year, Morgane Fouse released a mixtape under her stage name, Ganou. It was called Catharsis, and it was quite literally an act of catharsis for the Paris-born, Philadelphia-based electronic composer and vocalist. Fouse tells me that making music is, for her, a means of coping with depression; you easily notice it in her song titles (“This Is Why I Make Music”; “Can’t Sleep? Make Music”) as well as the emotional release you hear in her performances. Take a listen to her Key Studio Session take on “Detainment;” after a heartfelt bridge where Ganou raps about trying to confront pain but being dismissed and discouraged by those around her, her vocals soar into a tremendous coda – “How do I move on, how do I move on, from the monsters in my soul?” It’s powerful, exhilarating stuff.

But it’s also very beautiful, serene and tender. There’s an element of playfulness to her sound, most evident in “Hey Ya (Cover of a Cover).” And there’s a contemplative side. Ganou studied music at West Chester University, but has been practicing all her life, taking piano and voice lessons since she was in elementary school and taking part in choirs in high school. When she warmed up for our session, she did it in the proper vocal student way: by singing her way through an octave of scales.

Feeling creatively restricted, Ganou dropped out of school, moved to Philly and developed the sound she has today – an eclectic fusion of genres. You can hear the haunting minimalism of James Blake in the evocative “Waves,” which she performed for us, but she also finds inspiration in deadmau5 and Animal Collective. Two of the songs played – the yearning opening of “Set Yourself Free,” the reflective conclusion of “Fell In Love With A Boy” – are brand new, seeing their first release here. But where and when they will come out in finished form is still uncertain. We caught Ganou just before she went into a creative hibernation of sorts; she tells us its not permanent, but rather a means of calming some of the hurt she sings about while seeing how music and art can fit in her life.  Doing this “is shedding a lot of light on my future,” Ganou says, “and I can’t wait to see my creative end results.” Neither can we.