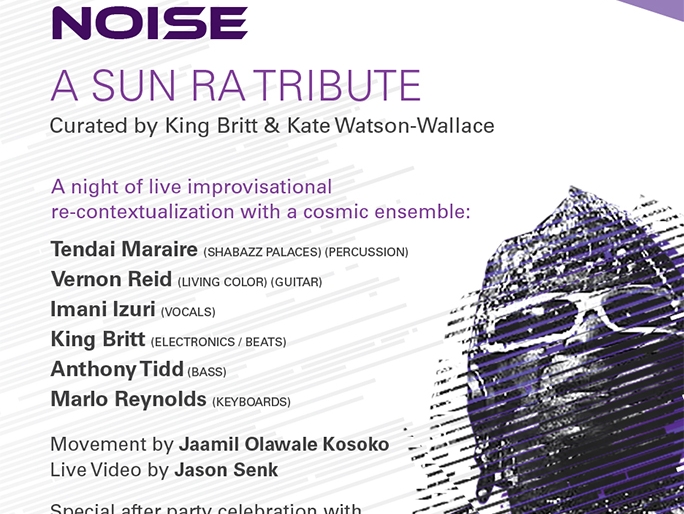 A tribute to the jazz musician Sun Ra curated by King Britt and choreographer/visual artist Kate Watson-Wallace will take place at Fringe Arts on Friday, June 6. The event is a live improvisational “re-contextualization” of Sun Ra’s music featuring Tendai Maraire of Shabazz Palaces on percussion, Vernon Reid of Living Color on guitar, King Britt on beats and electronics, Anthony Tidd on bass, vocalist Imani Izuri, and Marlo Reynolds on keyboards. Live video will be provided by Jason Senk and “movement” by Jaamil Olawale Kosoko of Philadiction Movement. The event, says King Britt, is the first of several that “music/multidimensional events” that the Fringe is presenting in its new space.

The jazz musician, originally from Birmingham, Alabama, relocated to the Germantown section of Philadelphia in 1968 where he resided until his death in 1993. King Britt came up with the idea of a tribute to Sun Ra since it was close to Sun Ra’s birthday. “I suggested we do a tribute to him by creating a beautiful ensemble of music, video and dance,” Britt told me in an e-mail. “Everyone involved has been touched by Ra and his legacy. Sun Ra always embraced the art of improvisation within a construct of his compositions. He also embraced technology and used it in a way that propelled the music to new places.”

“We felt that everyone involved would be comfortable in this context and non obvious samples and loops, from some of Sun Ra’s improvs, will steer the direction of the journey,” said Britt. “Everyone involved, including video, which will be mixed live, are all very good improvisors and it will be a one time only experience. This is event is important because it will bridge the gap between generations. A lot of the older Sun Ra fans will love to witness a new spin on his legacy and the young fans who have come to know Sonny, through samples, hip hop and alternative music, will get to learn a bit of the history through multidisciplinary lenses.”

Go here for tickets and more information about the show. Below, check out a documentary about Sun Ra by film maker Robert Mugge, A Joyful Noise.