Unlocked: How a trip to the Jersey Shore in the winter brought City Rain's new album to life - WXPN 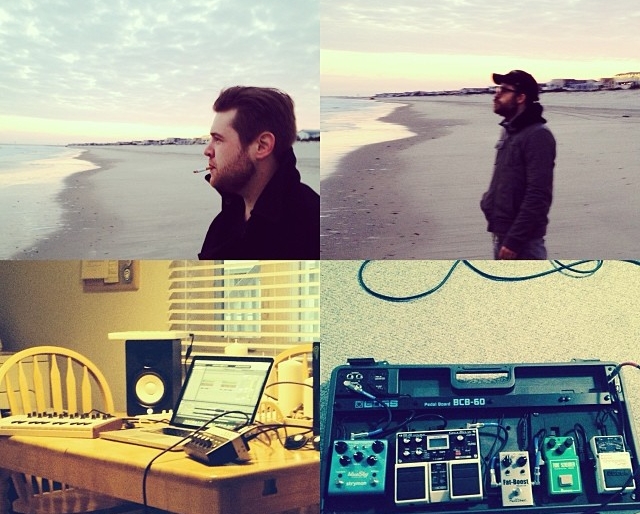 Unlocked: How a trip to the Jersey Shore in the winter brought City Rain’s new album to life

In early 2013, when Ben Runyan and Scott Cumpstone began working on the music that would become City Rain‘s new LP Songs for a High School Dance, they worked in fits and starts.

Runyan would lay out a tapestry of beats and send it to Cumpstone, who would add guitar florishes and shoot it back. Ideas would build, songs would develop. But there was never a more concentrated block of recording than maybe two hours in a shot.

“It was a lot more like The Postal Service,” Runyan reasons. “Moreso than feeling truly like a band.”

This changed when the duo decided to wrap up High School Dance with a vacation. Runyan and Cumpstone traveled to Avalon, New Jersey, in early December, holed up in a family shore house and found their voice as a band.

“The shore is a great place to go in the off-season,” Cumpstone says. “Nobody is there. Everything’s closed. It allowed us to really focus, and to have more than half a night to get stuff done with the record.”

Runyan describes the experience as intensely creative experience of trying ideas, scrapping ideas, arguing over sounds and arrangements, walking away for a cool-off walk on the beach and returning back to the fray. But it resulted in the album taking the dynamic shape it has. Rather than 12 tracks of high-BPM dance beats, High School Dance has a rise and fall – midtempo and hushed moments in addition to the dancefloor ragers.

“Walls” emerged from a guitar line Cumpstone was jamming on during downtime that Runyan heard potential in; album closer “Mama I Want to Go Home” emerged from one of those beach walks, and the duo rushed in to get their acoustic guitar and microphones and laid down the song with the waves in the background.

Finding this range is what sets the album apart from City Rain releases past. Runyan said the spaz-dance tone of their early records were born of a stretch in his life where he frequented DJ nights at The Barbary and thought that, well, if I want to make electronic music, this is what it has to sound like.

“I felt like I was trying to be somebody I’m not,” he says.

City Rain’s early releases had a degree of artfulness and clever sound-craft in how the songs were shaped – though, as we noted in our record review ofHigh School Dance, they fell short when it came to connecting on a broader level.

“As much as I love the arty end of things, I love arena rock,” Runyan says. “Journey, U2, Muse. In the same breath as I love Remain In Light or Waylon Jennings.”

Cumpstone was a big part in helping shape the pop sound of High School Dance. An elementary school friend of Runyan, he joined the band in early 2013 after the departure of original guitarist Jarrett Zerrer. At first, Cumpstone said, he trod lightly on his new musical project.

Cumpstone’s previous playing was in the guitar-heavy pop-rock group The Violet Tone, a band about which he doesn’t say a heck of a lot. But in the same way he brought a pop sensibility to Runyan’s electronic tapestries, Runyan got him to loosen up as a player.

“He’d hear little things I’d play that other people I’ve played with might just listen and say ‘oh, that’s cool,’ and just shrug,” Cumpstone says. “But Ben latches onto them, and shapes them into the songs.”

It was refreshing experience that Cumpstone says opened him up artistically. Previously, he used to obsess about every note he played – if there was a mistake, no matter how small or undetectable it may be, it was bad.

“That notion was driven into me pretty hard,” Cumpstone admits. “Everything needs to be perfect, so you hammer at it until it is. But when it’s too perfect, it becomes watered down. It loses emotion.”

Emotion is a big part of High School Dance – there was of course the yearning single “The Optimist,” which kicked the partnership into overdrive when it became a YouTube hit last summer. There is the plaintive, haunting “Mama,” completed among the waves. And there’s the cathartic “The Dreamer,” wherein Runyan channels his self-doubt and uncertainty into a moving and beautiful five minutes.

I asked Runyan if there was ever any doubt that City Rain would continue following his split with Zerrer.

“Maybe for a day,” Runyan says. “I suppose it would be a cooler story if I really thought it was over. But I knew I didn’t want it to be over. It couldn’t be over, music has kept me going for so long.”

Cumpstone nods knowingly about the drive to make music. He experiences the same thing. “There’s always something that keeps me coming back, much to the detriment of my bank account, my friendships, your sanity.”

He laughs, and Runyan adds “If I quit, I’m guaranteed misery. At least misery is only a possibility if I keep going.”

Clearly these two are mutual motivators with a shared optimistic outlook on their music, like the song suggests. And having seen the potential of their collaboration in Avalon, they’re excited to return for the next album.

“If we could do this when we only had three days,” Cumpstone says, “imagine what we could do with a week.”

Songs for a High School Dance is the featured album in this week’s edition of Unlocked. Download the single “Waiting on a Feeling” in Monday’s post, read Tuesday’s album review, watch an acoustic video in yesterday’s post and check back tomorrow for an interview and Friday for a travelogue.