Recently CW Henry Elementary School in the Mount Airy section of Philadelphia was broken into and computers, iPads and music room equipment were stolen.

As the school begins the recovery and replacement process, parents and local musicians are stepping up to “pay it forward” on Saturday, May 24th from 4pm – 6pm at World Cafe Live upstairs.

I spoke with Paula Hanson, a parent of CW Henry first-grader Phoebe and an audio engineer who has worked with Rob Zombie, Stevie Nicks, kd lang and Korn.  Along with her husband Ringo, Paula is trying to raise funds to buy new equipment for the school.

Helen Leicht: I’m sorry to hear that there was a burglary at C W Henry Elementary school.

Paula Hanson: Yes, we had several iMacs the kids use, as well as a teacher’s MacBook and the flat screen TV in the music room the kids use to watch performances and whatnot on.  Probably the most crushing was the theft of the iPads the autistic kids use as part of their immersion into the classroom.  They really loved those and they were a great help.

HL: You have organized a fund raiser concert for CW Henry Elementary School.  Can you tell me about the school and what grades and children have been affected by this theft?

PH: CW Henry is a neighborhood public K-8 in West Mt Airy.  It’s a wonderful neighborhood.  There’s a bit of a misconception that because we’re located in an affluent hood that we do better than other Philly schools.  However we’re subject to the same budget as everyone else, and nearly half our kids come in from other parts of Philly.  The parents and teachers work really hard to supplement all the budget woes.

Some of the gear that was stolen was donated in the first place.  The whole school is taught music by Ms Paulino Trisdorfer, who runs an astoundingly good music program, so the theft of her computers affects everyone.  The two first grade classrooms had everything electronic taken, so we had to drag up an eMac from the basement so they had at least one for their centers.  And the iPads that the two classes use, but especially the four kids in each room in our Autistic Support Program were really left hanging.

#CWHenryOptimist from Paula Hanson on Vimeo.

HL: You decided to put together a benefit concert at World Cafe Live in Philadelphia to raise some money to help.  Who will be performing at your event? 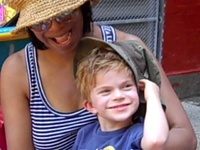 Ms Donna Rose, one of our classroom assistants, with Aaren Wallace-Larkin, one of our kids in CW Henry’s extensive Autistic Support program.

PH: City Rain, who are a brilliant electro pop duo who actually live in the neighborhood.  Their record Songs From A High School Dance was just released and it’s fantastic.  Ben Runyan is one of the best frontmen I’ve ever seen, and I’ve actually been in the music biz over 30 years internationally.  The combo of him and Scott Cumpstone together is just astonishing.

They’re going to perform a set plus Nikki Trisdorfer, our music teacher, will do some stuff with them as well as a some solo songs.  She’s wonderful too. They’re going to incorporate some of the girls from the Upper School Choir into the program.  We’re putting together some really great covers that will really be fabulous.

Plus an acoustic set by Rob of Revolution, I Love You.  We’re working on having some other names pop in and will get the word out as they pop up.

HL: It’s at World Cafe Live in Philly (upstairs) this coming Saturday May 24th from 4 – 6pm.  How do people get tickets to your fund raiser
or help in any other way to support your efforts?

PH: You can go to this link to buy tickets or in person from the WCL Box Office.  Two drinks and light food are included in the cover.

Also, if you can’t make the benefit, we have a Fundly campaign, you can donate as much or as little as you like, and coming on as a supporter will really help increase our visibility to the whole world.

My company Live/Work Recording, who works a lot with Nikki’s various music programs, along with phillynightout.com, are sponsoring this event.

CW Henry is a truly awesome school community, and this is the first time anything like this has happened in at least 15 years.  We would like to show the kids what you can accomplish if you have the power of he community behind you.  We aren’t called The City Of Brotherly Love for nothing.