Every music fan has their own personal list of all-time favorite concerts. But imagine if you were old enough to experience a legendary rock and roll act like Chuck Berry in his prime, while in the same breath catching emerging bands like The Black Keys and Nirvana before they got huge. It’s pretty likely you never got to do either of these things. But there is one hypothetically feasible way to make it happen: invent a time machine. So let’s pretend for a minute this doable – here’s what I’d go back in time to see.

The earlier you saw Led Zeppelin the better. Towards the middle of the 70s, Jimmy Page’s heroin addiction affected his onstage presence, and Robert Plant’s voice became noticeably strained. There’s a phenomenal video, which you can find on YouTube, of Led Zeppelin playing at the Royal Albert Hall in London from the same year, which features my personal favorite versions of “Communication Breakdown,” “Bring It On Home,” “I Can’t Quit You Baby,” and “How Many More Times.” The grainy video (which also features Page doing the seemingly impossible: making a sweater vest look cool) isn’t all that clear, but the sound is great and that’s really all that matters. It’s likely you would’ve gotten the same mind blowing performance in Philly (check out this vintage review by longtime Philly journo Clark De Leon).

Julian Casablancas’ voice in the early 00s was a thing of beauty. He had the perfect Jim Morrison-esque rock and roll growl, and is probably one of the most overlooked singers in rock history during his prime. Although, I’m a huge fan of The Strokes’s later stuff as well, there’s no denying their first two albums were two of the best rock albums in the early aughties – a time that was otherwise riddled with awful rock bands like Nickelback and Breaking Benjamin.

This was the first time Oasis ever played in Philly and also their first ever American tour. Around this time, tensions between Noel and Liam Gallagher had yet to reach the point of totally hating each other’s guts. Also, due to a randomly placed wall on J.C. Dobbs’ stage, this show was rumored to be the only time Noel played on the left side of the stage.

4. The Who – October 19, 1969 at The Electric Factory
The Who actually played two shows at the Electric Factory on this day (bands did that back then, apparently). Anybody who’s ever seen Who videos from the late 60s knows that the band was a powerhouse back in this time period — especially with the late Keith Moon on drums. Also, this probably isn’t the Electric Factory you’re familiar with. The original one was at 22nd and Arch and closed down in 1973. The current one at 7th and Willow opened in 1994. Listen to audio from the show here. 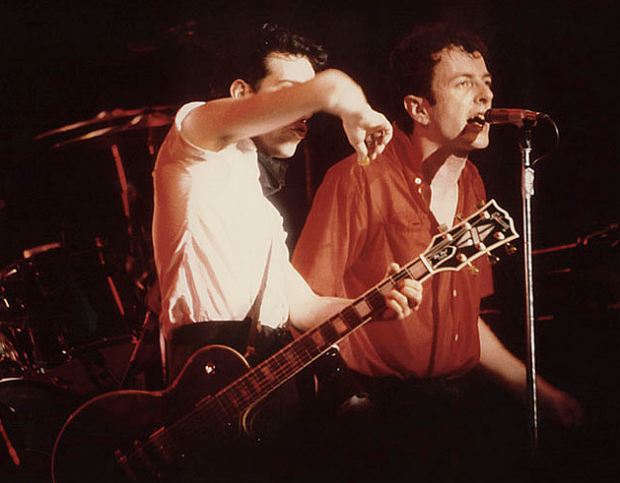 The year 1980 was a good one to see The Clash live. You would have heard songs from all their best albums including Give ‘Em Enough Rope, London Calling and their self-titled debut. Also, you’d get to see their iconic lineup. By 1983, drummer Topper Headon and guitarist Mick Jones would eventually be kicked out of the band.

There were at least two or three times I almost saw the Black Keys before they got huge. For whatever reason, I couldn’t go to the concerts, but I always knew they’d be back in Philly again so I never let it bother me much. That is, until they released Brothers and the band made it big time. Part of me is happy they got big, because it’s good that people appreciate good old fashioned bluesy rock music. However, I really wish I would’ve been able to see them before they started playing arenas. Also, as good as Brothers and El Camino are, I think their best music can be found on Magic Potion, Thickfreakness and especially (my personal favorite) Rubber Factory.

I’ve always regarded Aerosmith as one of the most rock and roll rock and roll bands in American history, if that makes any sense to you. They’re a must have on this list. They certainly still have some gas in the tank, but I think seeing them in their prime in the 70s would have been best. However, this show was memorable for another reason: At the beginning of the encore, a fan threw a cherry bomb onto the stage, burning Steven Tyler’s cornea and rupturing an artery in Joe Perry’s arm. So let’s hop in our time machine and see Aerosmith while they still charged reasonable amounts for tickets, and before Steven Tyler began to look like an elderly woman.

I used to have a job working at a gas station, and while working, my boss let me play music off my iPod through a small Bose stereo. Whenever I played the Violent Femmes, customers usually in their late 30s to mid 40s would always stop and ask me what band they were listening to, because it sounded so familiar. The Violent Femmes are that band you always forget about, but they had a handful of super catchy fun songs. Totally worth the time machine trip.

Holy shit. The White Stripes played the North Star Bar. Can you imagine seeing such a legendary band in such an intimate venue? Well you don’t have to. You can see the whole thing below (Jack White’s voice is spot on throughout the whole performance). Anyway, I’m seriously contemplating devising a diabolical plan to rob Jack White of all his money. Why? Back in 2012, Jack White said that the only reason he would ever consider reuniting the White Stripes is if he “went bankrupt or really needed the cash.” So I need to find a way to make this happen, that way all of us who never got to see the band live might have a chance.

The best time to see The Kinks live would have been in the late 1960s, but unfortunately they were banned from playing in America at that time. The closest Philly Kinks date I can find to that era is this one.

The late 70s was the best time to see Pink Floyd. This tour was in support of the album Animals. By this time, the band had already recorded some of their biggest albums such as The Dark Side of the Moon and Wish You Were Here. The complete audio of this show can be found here.

Green Day is a band that has always been great live. Their last show in Philly was in April of last year at Temple’s Liacouras Center where Billie Joe Armstrong proved he is still one of the best frontmen in rock — even into his early 40s. During this Liacouras Center show, he mentioned J.C. Dobbs and dedicated “Burnout” to the legendary South Street venue and all who patronized it. So why not see them before they got huge? This January show was their first ever in the City of Brotherly Love.

This show must have been wild. It was the third of three times the band played Philly and the first with Dave Grohl drumming. This was definitely the Nirvana show to go to. The Melvins were also on the bill. There’s no video, but there’s some pretty respectable audio from the show here. Supposedly, the crowd accusing the band of being sellouts after they refused to play an encore, according to the YouTube video’s description.

Big Brother & The Holding Company probably would have garnered more success if it wasn’t for Janis Joplin’s tragic heroin overdose in 1970, tragically ending the lives of one of the greatest singers in rock and roll history. This show was only a few months after the chart-topping Cheap Thrills album was released, one of the best albums of the 60s and famous for songs like “Turtle Blues” and “Piece of my Heart.”

It’s criminal how underrated Blind Melon is. They’re widely regarded for being one hit wonders for their song “No Rain” off of their first album. However, it’s far from true that it was their only good song. Their entire self-titled debut is easily one of the best albums of the 90s, despite the fact it doesn’t quite have the notoriety that Ten, Nevermind or Dookie does.

I think most would agree that the Bon Scott era of AC/DC was vastly superior to the Brian Johnson era. Unfortunately, I couldn’t find a show AC/DC headlined in Philly with Bon Scott, so we’re going to have to go back in time for this 1979 show where they opened for UFO.

I would have totally would have bought tickets to see her live had she not gained access to the 27 club. The troubled singer struggled with drugs throughout her life, and it’s a shame she couldn’t find a way to put her addictions behind her. Here’s a cool video of the shows opening number, “Addicted.”

The Rolling Stones at The Spectrum | Photo by Annie Liebowitz

It’s completely ridiculous how expensive tickets to see the Stones were on their last tour (close to $1,000 for the best seats). Ticket prices for this show were probably a bit more sensible, and you probably got a better performance to go along with it. Don’t get me wrong, Mick Jagger is just as entertaining as he’s always been. But I wouldn’t say the same thing for the rest of the band members. Another interesting tidbit: This was the first Philly show the band played with Ronnie Wood, who recently joined after the departure of Mick Taylor, and the show was shot by famed rock photographer Annie Liebowitz.

When old people who survived through the 60s and 70s talk about how good the music used to be, they typically mention bands like the Stones, Beatles, Hendrix, Pink Floyd, etc. However, one band you don’t hear that much about is Procol Harum. But you should. They’re mostly know for the song “A Whiter Shade of Pale.” However, the band is terribly underrated, as they’ve made at least three or four great records including their self-titled debut album, Shine on Brightly, and A Salty Dog.

T. Rex belongs in the same category of underrated bands from the 70s that Procol Harum belongs to. They also had a big song called “Bang a Gong (Get it On)” which still receives radio play. They made a few great albums, including Electric Warrior and The Slider before singer Marc Bolan died in a tragic car accident in September of 1977. But their big hit lives on, and was recently covered at XPN’s Free at Noon by the very unlikely pairing of The Black Lips and Boy George.

This list is just some of the many, many concert options we could have time-traveled to see from Philadelphia’s rich live music history. What would you have taken your time machine to see? Let us know in the comments.