When people outside of Philadelphia think of our fair city, the following comes to mind: cheesesteaks, sports teams with middling records, and Boyz II Men.

While the first two items evoke eye-rolls I think we can all agree that we’re proud of being the town that bore one of the most successful groups of the 1990’s. When Nathan Morris, Wanya Morris, and Shawn Stockman took the stage of The Tower Theater on Saturday night, the reaction was rapturous. “On Bended Knee” showed up as only their third song in their set, and to say the crowd went wild would be an understatement. Wanya literally got down on his one knee and held various members of the crowd’s hands, evoking hysteria. I must say when Nathan started his verse, I got a little giddy myself.

Shawn took time out to thank the crowd for the continued support and say how they never forgot where they came from. This led to a trip back to 1991 with a performance of “Please Don’t Go” (complete with boy group dance moves) and was followed quickly by “Uhh Ahh,” which the younger crowd may recognize as the song recently sampled by Beyonce on her single “Countdown.”

The guys then moved on to their covers set: Motown favorites which got the crowd moving and then old-school power ballads. Nathan explained that they were offered the Lonestar track “Amazed” before the country one-hit wonders took it for their own. As he explained, now we hear the song in malls, bathrooms, and elevators all the world over. Needless to say, they felt kind of foolish having rejected the song but determined to record it themselves at some point. Boyz made it their own and as someone who does not care for the Lonestar version, I was floored. 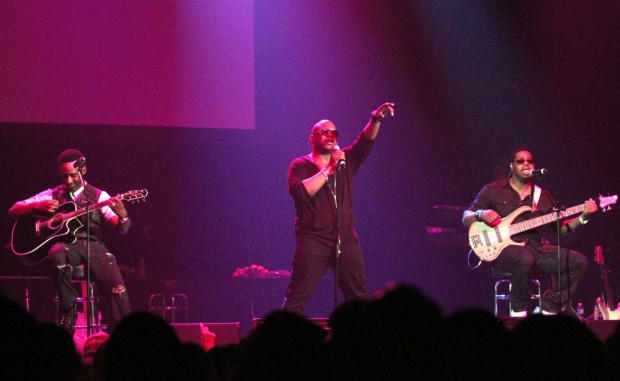 One more surprise awaited us when Shawn and Nathan grabbed a guitar and bass and explained that their new album (Collide, which is being released in September) is going in a slightly different direction. The two songs the trio performed sounded more pop/rock than their previous work, evoking thoughts of “Unpretty,” by TLC or “Stay,” by Rihanna and Mikky Ekko. Most times when a band says “This is a new one,” that’s the cue for the audience to get up and grab a drink or hit the restroom but Boyz fans are loyal and seemed to really enjoy these teasers as much as the more familiar tunes.

This all led up to the big finale: armed with roses, the guys serenaded those who rushed the stage with their mega-hit “I’ll Make Love To You” while handing the flowers out to the excited women. They followed up with a few more of the love ballads that we all know and adore. Of course they couldn’t leave a hometown crowd without performing “Motownphilly,” complete with the group showing off their 90’s hip hop moves. Even after the song was over and they took their bows, Wanya, Nathan, and Shawn stayed to shake hands and say hello to their fans.

Many groups who have been together for 22 years go through the motions, take their pay, and call it a night but Boyz II Men seem to really still enjoy each other and those who support them. Many stuck around after the show, and when I got to the front lobby to leave, there was a huge crowd doing the Cha Cha Slide, waiting for their hometown heroes.