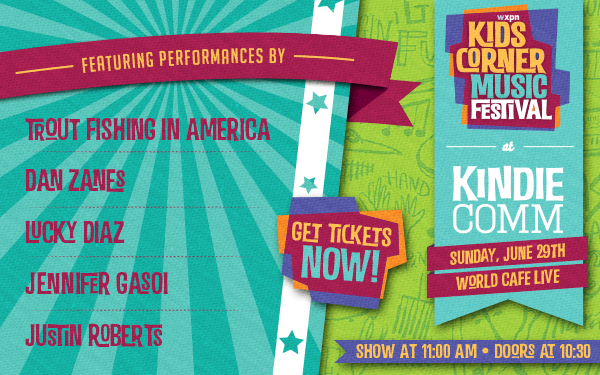 The first ever KindieComm is coming to World Cafe Live June 28 to 29th. “Kindie” refers to the growing field of independent kids’ music, a mixture of kid and indie. “Comm” refers to community, as the two-day event – put on by WXPN and its Kids Corner show – will bring together the diverse community of artists, publicists, bloggers, broadcasters and audiences who make up kindie.

In recent years, the field of kindie has been expanding rapidly, especially as access to technology increased. Pioneered by artists like Barry Lou Polisar (featured on the Juno soundtrack), kindie allows for kids’ musicians to create music outside the boundaries of conventional kids’ music. By increasing technological ease, artists are given broader audience access.

One of the great points about kindie is that the audience is not limited to kids. Some kindie artists, like They Might Be Giants, play songs that cater to both kids and adults. Shows like Yo Gabba Gabba often feature prominent artists like the Shins playing trippy kids’ music. Watch the Shins preform “It’s OK, Try Again” here.

KindieComm will feature presentations, collaborations and, of course, performances. On Saturday, there will be a host of workshops and discussion groups to address challenges in the industry. It will be capped off by a private industry show with the local Alex and the Kaleidoscope Band and Malaysian singer-songwriter Zee Avi as well as others.

Headlining the convention are the pop-folk, four-time Grammy nominated duo Trout Fishing in America. Through songs like “Martin Luther King & Rosa Parks” and “Big Round World” the duo aims to educate kids on serious topics like multiculturalism through catchy folk tunes. Nevertheless, they retaintheir trademark goofy, humorous style, especially in songs like “Curse of the Spinach”. Listen to the toe-tapping ditty of “Chicken Joe” below.

Other artists to look out for are Dan Zanes (of the Del Fuegos), Jennifer Gasoi, Lucky Diaz and Justin Roberts. Tickets and more information can be found here.