“In the beginning we were scrambled together / Mixed in a celestial bowl and hand-fluffed with a feather / And the tears of bliss were not amiss / It was a good day.” The opening lines of Kishi Bashi’s new single “Bittersweet Genesis for Him AND Her” could easily be the only words need spoken about one of his concerts. Friday evening, he brought his magical sounds to the Theater of Living Arts, and crafted a special evening for everyone involved.

Getting the night started off were two Philly bands – Our Griffins and Buried Beds. The simplistic, soothing charm of Our Griffins was a nice addition to the evening, even though the band wasn’t on the entire tour. Buried Beds eclectic-art-rock sounds got the audience more into the swing of things. As a long-time mewithoutYou fan, I was excited to see their current guitarist Brandon Beaver in his main project – and they certainly didn’t disappoint, laying into their task with gusto.

After two great sets, the audience was more than ready for the star of the evening. Entering to great applause, K Ishibashi bowed and launched into his bombastic set. After seeing him twice before, the addition of a full band was interesting, and I must say that I love the way in which the material benefits from having more musical presence on the stage. Long-time friend and touring collaborator Mike Savino (who may be more familiar as Tall Tall Trees) was of course along for the ride, blowing the audience away with his banjo wizardry. 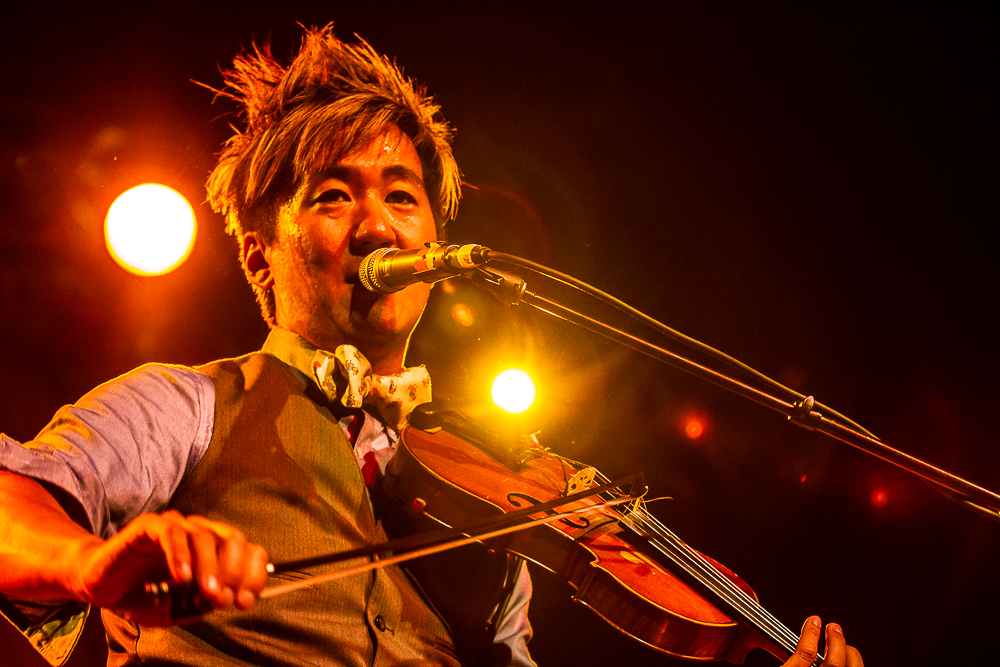 Leading off with one of new album Lighght’s singles “Philosophize In It! Chemicalize It!”, Ishibashi hooked the crowd of old and new fans on his spiraling, looping techniques – making the song sound closer to it’s original release than the version which appears on Lighght. Overall, Lighght is a more sonically mature and robust album, and sees Ishibashi leaving the weighty introspectiveness of 2012’s 151a behind in favor of a much more whimsical effort, traversing sonic landscapes which leap and soar in heights of production and diverse instrumentation.

Working through a setlist balanced quite evenly between the two albums, K had the audience absolutely enthralled. Whether fans had seen his prior performances at the Church or not was no matter, as Ishibashi and his band built the complex songs from the ground up, spiraling and falling in the moment. About halfway through the set, one of K’s loops went into an intentional cacophony, and the band quietly left the stage. K intro’d “Bittersweet Genesis For Him AND Her” by explaining his re-imagined creation mythos in detail. A rowdy fan kept screaming “POETRY!”, and Ishibashi eventually was forced to say “Alright shut up man, I’ve gotta concentrate for this!” and garnering a chuckle from the audience. 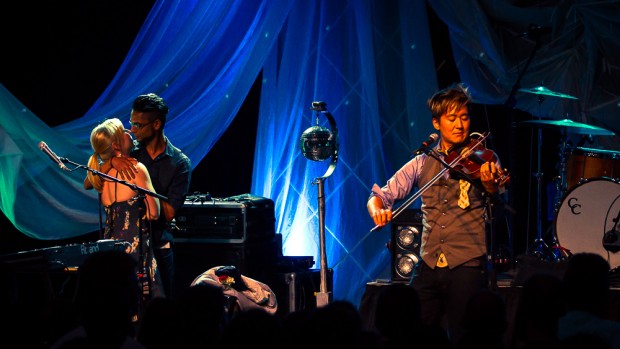 Before proceeding, K called up a couple on to the stage and turned over the mic. The audience held its collective breath as we watched new friend Anand declare his love for Katie, proclaiming “I want to spend the rest of my life together – and I want that in all of my other lifetimes, as well.” After the moving proposal, K dedicated his heart-rending romance ballad “Manchester” to the couple, as they held each other and watched from the side of the stage, reveling in the music and each other’s love.

After the soaring strains of “I Am the Antichrist to You”, K bowed and took his leave from the stage. Roaring with approval, the audience clapped, cheered, and eventually broke out into chants of “Mr. Steak!”, eagerly awaiting the encore. Wasting little time, the four musicians bounded back out on stage, took their places, and ripped into the peppy, whimsical jam that is “The Ballad of Mr. Steak”. Ishibashi utilized the fact that the song doesn’t feature his violin to rock about the stage with the mic, dancing and singing at the top of his lungs, the audience shouting every word right back at him, dancing in a way that would make Mr. Steak himself proud.

Unexpectedly covering (not to mention absolutely nailing) “Live & Let Die” by Paul McCartney and Wings, Kishi Bashi proceeded to take up the violin one last time, and laid into his sighing, bubbly classic “It All Began With a Burst”. After the group took their final, exhausted bows, they left the stage one final time. Re-appearing upstairs several minutes later, K DJ’d a late-night dance party which resembled more of a casual hangout with friends than a serious, Win Butler-esque DJ set.

Walking away from his third headlining performance in Philadelphia, I’d like to think that there’s a special place in Kishi Bashi’s heart for Philadelphia. The effortless romance that bubbles in and through his songs is just too acutely real in his shows here, and that’s reflected in everything from his effervescent smile to his willingness to help out a guy pop the question. As always, thank you, K. We love you, too.

Setlist
Philosophize In It! Chemicalize With It!
Carry On, Phenomenon
Bright Whites
Q&A
Hahaha Pt. 1
Hahaha Pt. 2
Atticus In The Desert
Wonder Woman, Wonder Me
Evalyn, Summer Has Arrived
Beat the Bright Out of Me
Bittersweet Genesis For Him AND Her (solo)
Manchester (solo)
I Am the Antichrist to You (solo)