I was born in the summer and it’s always been my favorite season. There’s nothing I love more than wearing shorts, and swimming, and watching the sun set at 9 p.m. To me, summer vibes are those perfect summer experiences that make you feel happy to be alive—like lounging at Morgan’s Pier, drinking a Watermelon Ricky, or hanging at Cantina with an Endless Summer Margarita, or boating down the Bohemia River listening to “My Girl” by the Temptations. (I admit many of these involve alcohol).

For me, summer vibes are always tied to music. When asking myself: is this a summer jam? I tend to consider one question: is this something I would want to listen to while on a boat? If the answer is yes, it goes on my Summer Playlist.

Here are some examples of great summer jams: “Saturday in the Park” by Chicago, “Brandy (You’re a Fine Girl),” by the Looking Glass, pretty much anything by Steely Dan. On the modern front, there’s Tennis, and Mayer Hawthorne, and Octopus, by The Bees (seriously this record will make you feel like you’re on a lake in England somewhere) and literally dozens of local bands, running the gamut from breezy island grooves to summer-in-the-city bangers.

This summer, I decided to tap into my musical connections and explore summer vibes with some of the bands soundtracking my June through September. In this spot, I’ll meet with some of my fave summer music creators, to do quintessentially summer things, drink quintessentially summer drinks, and talk about why summer rules (and the other seasons drool).

For my first endeavor, I decided to meet up with Work Drugs, whose sun-drenched jams are practically made for late-night beach parties, the taste of salt-water taffy on your lips, and the wind in your hair.

We meet up on a warm, humid day, the air thick and suffocating, the sky looking like it might start pouring at any second. In retrospect, it’s the quintessential summer day, even though we like to imagine summer as all sunshine and cool breezes.

We hang out for about 3 hours—Matt (my bf) and I have rented a car for just 1 hour, because I think the interview will be “super quick.” It is not—but it’s an awesome time.

Two things about Work Drugs. First, they go by the names “Tom Crystal” and “Benjamin Louisiana,” but in real life their names are Mike and Jim—namesapparently so un-chill that they decided to come up with the fanciful alternatives of “Tom” and “Ben.” (They also admit they’re not sure who’s who). And second, they—well rather, Jim—have an awesome house in Port Richmond, with a roof deck, which everyone knows can be instrumental in achieving the perfect summer vibes.

During our interview, we drink a ton of Magic Hat #9 and Magic Hat Elder Betty; Jim mostly drinks red wine. We listen to Diana Ross, and Steely Dan; afterwards we climb onto the roof deck and drink more in the rain, then take this awkward Instagram where I’m standing about 3 feet away from Jim so we all appear the same height, which seems very clever at the time (Jim is easily a foot taller than me). 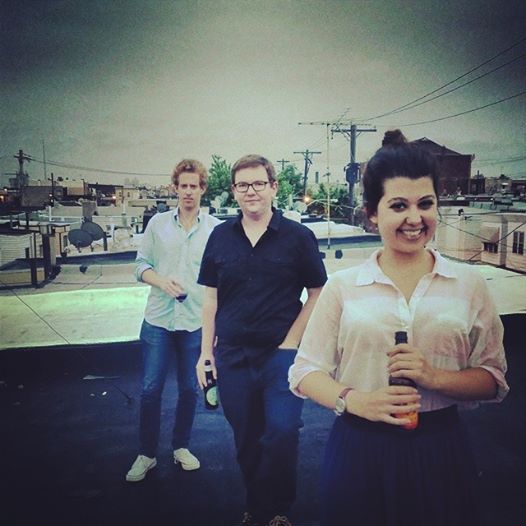 Hanging out on Work Drugs’ deck

On record, Work Drugs are as smooth as smooth can be, spinning fantasy yarns about twinkling lights and fast cars. In real life, they’re completely normal guys with an impressively curated vinyl collection and a sweet roof deck. In between knocking back beers, we managed an actual interview; read on to find out how Work Drugs acquired their summery image, their summer playlist musts, and their feelings on tank tops, tanning, and sunglasses at night.

TK: Work Drugs make music that sounds like it’s perfect for summer. Is this intentional?

Mike: I don’t think it was intentional. When we were first starting out, we were really into the social media thing—I was going to California a lot; Jim was going to Florida a lot, and we had a lot of these Hipstamatic photos of palm trees and stuff. So it kinda became part of theme. I think a song like “Young Lungs” or “West Coast Slide”—we pair it with an image of a beachfront or a bunch of girls in bikinis, and it sort of becomes a summer song in people’s heads. And then of course, we both grew up down the Jersey shore, so it sorta evolved that way. And we always liked that vibe—the summer vibe. It’s cool to have a sound that’s associated with a season, because every time that season comes around people are like, “Oh Work Drugs! I forgot about them all winter long, awesome.”

Jim: When we started making music, it was actually the fall. And we needed to give it some context. And Mike just sorta said, “music for yachting, boating, and sexting”—and so that became the context. And all three of those activities just happened to be summer activities.

J: [laughs]. I remember shooting the footage for the “Third Wave” video, and if you look closely, my father is wearing a jacket. That was actually shot in October. The “Rad Racer” video is stuff from us going to The Barbary, mixed with footage I shot when I was in Florida for work.

TK: So tell me more about growing up down the shore. Did you guys spend a lot of time on actual boats then?

M: When we were kids, we grew up on Egg Harbor Bay, so we spent a lot of time going out on the boat out there. And then every summer, we would sail from Tuckertown, NJ down to Chesapeake City, MD with Jim’s dad—and from there to Baltimore and Rock Hall.

TK: That sounds amazing. So what’s on your perfect summer boating playlist? What makes a song perfect for summer?

J: I’m such a playlist junkie—I have literally dozens of playlists for every occasion. We’re listening to my roof-decking playlist right now! Let’s see. I think summer and I think Kool & The Gang, I think Doobie Brothers, I think The Eagles. I think Bob Marley, I think Christopher Kross, I think Donald Fagen solo, I think Hall & Oates, I think The Commodores.

M: I think about lots of new stuff too, like Kero One—who is this rapper from the West Coast, via Korea—and he’s a rapper, but he puts out all of his records as instrumentals as well, and they’re great. Some of that West Coast rap definitely has that summertime vibe.

TK: Do you guys ever find the summer label limiting?

J: It think it’s more of a generalization. I think there’s so much music out there in the world that people have a hard time dealing with it all unless they can define it in a certain way. So we get categorized as “summer music.” I think it was nice in the beginning, but I think a lot of our songs—if you really listen to them—are about other things too, besides having a good time in the summer. There are a lot of depressing songs, and slow songs, and songs that are just ridiculous and fun. It’s only limiting if people think about us one-dimensionally. 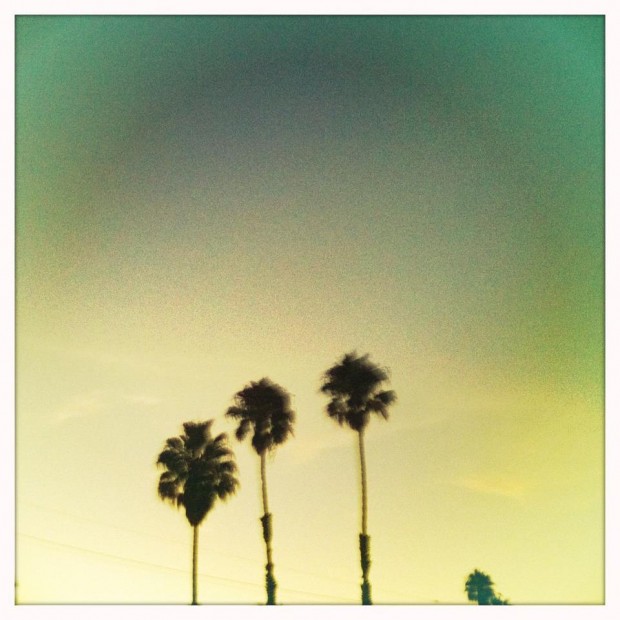 TK: So last summer, you guys played the Hultsfred Festival in Stockholm, Sweden right around this time of year. What was the coolest thing about playing that fest?

M: That fest was amazing.

J: —It was like Bonnaroo—you had The Flaming Lips, you had Band of Horses, you had Arctic Monkeys, you had Kings of Convenience, who we ended up drinking with at the bar…

M: [interjecting]—We are huge Kings of Convenience fans. And when we found out they were playing the fest with us, we were like, “we have to meet Kings of Convenience!” And I think it was me who was like, “I bet they are staying at our hotel.” So we did this crazy trek to get there—we worked in the morning, then took the Red Eye at night, got to Sweden at 8 a.m., and then stayed awake until 2 a.m. the next morning. And we were just leaving our hotel when the guy from Kings of Convenience walked out. And Jim and I were like, “Is that him?  I think that’s him!”

So then we just ended up hanging out at a lounge in the hotel, just killing time…and then a few hours later, another guy in the band came back, and we had two glasses of wine with him and just hung out. So at least for me, that trip was made.

TK: That sounds like an amazing experience. Now, let’s talk bad summers. What’s the worst summer job you ever had?

J: I used to paint houses in Wildwood, right on the beach block. And I’d be painting, and literally watching people go to the beach. It was the worst—but also, I would listen to WMGK, oldies radio, alll day. And I’d listen to “Rocket Man,” into “Stairway to Heaven” over and over.

M: I worked at a Five-and-Dime in Long BeachIsland. We listened to light rock, 96.9, and I swear they’d play Christopher Cross, “Sailing” like three times a shift. 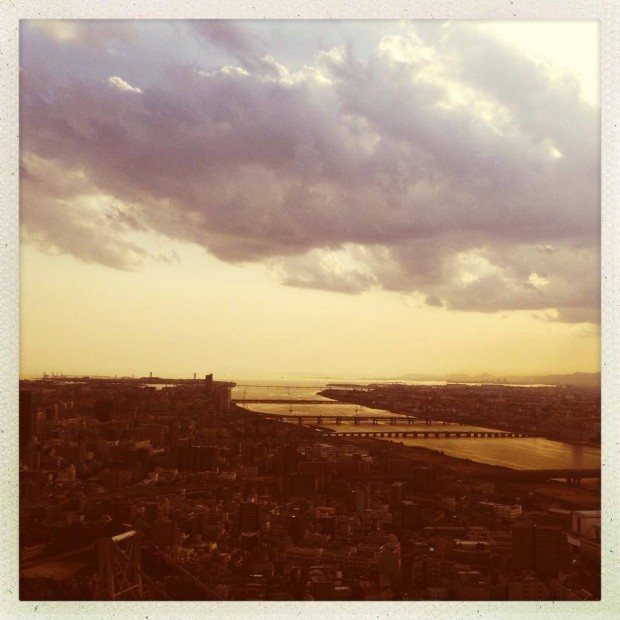 TK: So I have a few quick either/ors for you guys—about summer vibes in general. What do you prefer: being beachside, or poolside?

J: Poolside. I like to keep my feet clean.

TK: Indoors, in AC, or outdoors?

M: Outdoors, with the exception of tonight.

J: That’s too tough. I can’t possibly answer that.

TK: Fair enough!  I don’t know if I could either. Now time for some thumbs up or thumbs down. What’s Work Drugs’ stance on cut-off shorts? Yay or nay?

J: That’s a big YAY for Mike. He’s wearing long pants now, because I guess he wanted to impress, but normally he’s shorts all the way.

M: [laughing]. I admit I took shorts out…but then I remembered you might take a picture…

TK: What about tank tops for men: yay or nay?

J: I was never a tank top person—but when we played The Roxy in California last year there was a sign that specifically said “no tank tops.” So I was like, “I’m gonna challenge this.” And I did.

TK: And I think I already know the answer to this one…but sunglasses at night?

J: When your future’s so bright…

Catch more Work Drugs summer vibes when they play Johnny Brenda’s on Thursday, July 10. The 21+ show begins at 9 PM and tickets are $10–12; more information can be found via the venue’s website.