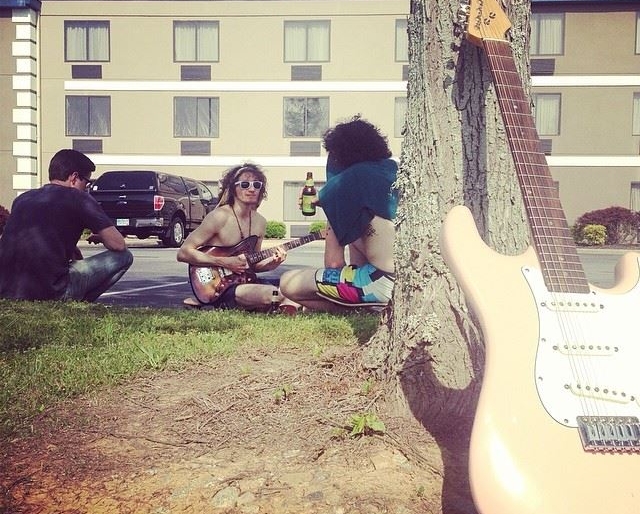 Unlocked: Download “In The Grass” from Vacationer’s sophomore album Relief

Vacationer wrote “In The Grass,” along with most recent single “Wild Life,” in the span of one day. Both tracks are featured on the Philadelphia-based, self-proclaimed “Nu Hula” band’s sophomore release, Relief, out tomorrow on Downtown Records.

“They were both buzzer-beaters,” says bassist and frontman Kenny Vasoli, adding jokingly, “we were already mixing the record and the label sort of kindly asked us to write more. They were like, “Hey this is great, but can you write more stuff that’s better?”

What the label wanted were radio hits, and what they got were two summer anthems that showed no signs of being a rushed job. “In The Grass” has a notable disco feel that the band attributes to its affinity for LCD Soundsystem. It’s a prime example of the broader range of influences that Vacationer called upon for Relief, the highly anticipated follow up to their 2012 break-out debut, Gone.

And though they aimed to do things a little differently this time around, Vacationer still delivers on Relief what has become their mantra about the power of music – it’s exotic, layered, blissful dream pop that has the ability to take the listener far, far away from here. Rife with smart riffs, genuine beats and good vibes, Relief isn’t just the soundtrack to summer 2014 — it’s the feel-good LP that you’ll want to give a spin, no matter what the season.

“Overwhelmed over nothing,’ Vasoli sings. “When the days start dragging, mood starts dragging you down … You can lay your head down in the grass. Be yourself with open eyes, every time.”

Sometimes it really is that easy.

Download “In The Grass” above, courtesy of Downtown Records. Check back throughout this week as we spotlight Relief on Unlocked, The Key’s regular spotlight on new and significant releases by Philadelphia area artists. Tomorrow we’ll post a review of the album, Wednesday we’ll chronicle live videos from a few of the band’s local shows, Thursday we’ll have a feature interview and Friday we’ll provide an inside glimpse into the everyday lives of a Vacationer.